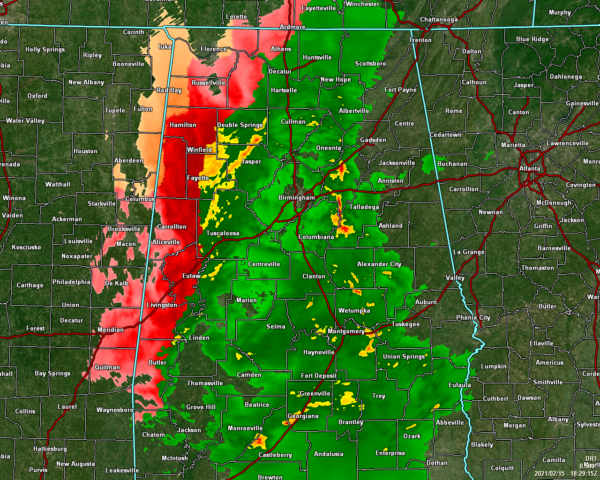 As of 12:29 pm, the western parts of North/Central Alabama continue to see a mixture of sleet and freezing rain. The eastern 2/3rds of the area is seeing mainly rain. A gravity wave recently moved across the I-65 corridor in Central Alabama that brought gusty winds for several minutes. I estimated a wind gust up to 25 MPH in my neighborhood.

Temperatures across Central Alabama were in the lower 30s to the lower 50s as of 12:00 pm. Haleyville was the only reporting station that was at the freezing mark at 32 degrees.

Temperatures across North Alabama were in the lower 30s to the lower 40s. Muscle Shoals was the only reporting station under the freezing mark at 31 degrees.

Power outages have been reported in Hackleburg as early estimates already show 1/4-inch has accumulated in that great town of Marion County.

Roads in Colbert and Franklin counties have been deemed impassable. Bridges in Madison County are starting to have ice form. If you do not have to travel, please don’t. We’ve already heard of numerous accidents across North/Central Alabama in those areas affected by freezing rain and sleet.

A WINTER WEATHER ADVISORY has been issued for the following counties in Central Alabama: Bibb, Blount, Jefferson, and Perry. The advisory goes into effect today at 3:00 pm and is set to expire at 9:00 pm tonight.

A WIND CHILL ADVISORY has been issued for the following counties in Central Alabama: Fayette, Greene, Lamar, Marion, Pickens, Sumter, and Winston. The advisory goes into effect at 12:00 am Tuesday and is set to expire at 9:00 am Tuesday morning.

FOR CENTRAL ALABAMA: The impacts still remain the same across the western half of Central Alabama, but the timing has been adjusted. The freezing rain and sleet activity will be out of the area by 9:00 pm tonight. For the eastern half of the area, temperatures will go below freezing tonight so any leftover wet spots on roadways, bridges, and overpasses will likely freeze.

Tonight’s lows will fall into the upper single digits to the mid-20s across the area from northwest to southeast. Tuesday’s highs will only reach the mid-20s to the lower 40s. Locations along and west of I-65 north of the I-20 corridor may stay below freezing, especially the northwestern locations. Icy conditions may persist until late Wednesday morning or into the early afternoon hours.

FOR NORTH ALABAMA: Freezing rain will continue to affect northwest and north central Alabama and become heavier and more widespread throughout the day. Significant ice accumulations are expected, with light snow and sleet accumulations also possible, especially for far northwest portions of Alabama. This will create widespread hazardous travel conditions and result in some power outages and tree damage.

Hazardous travel conditions will continue Tuesday through Wednesday morning as temperatures will remain below freezing. This means any ice or snow that accumulated on Monday will stay in place. 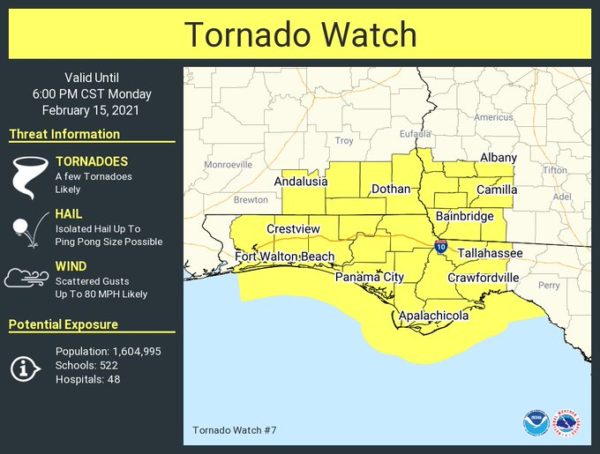 A Tornado Watch has been issued for the southeastern counties of South Alabama as conditions are becoming favorable for the potential of a few tornadoes. Damaging winds and ping pong size hail will also be possible in the watch area. The watch is set to expire at 6:00pm tonight.

We’ll continue to keep you posted throughout the day on our icy weather situation.