They tell you much, pay attention. 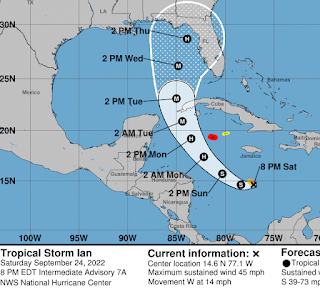 The NHC waits to be really sure before taking Miami out of the Cone and the fact that they did at 5 PM says a lot about the confidence in the newest models taking Ian further up into the Easterh Gulf of Mexico. I just looked at models, though I didn’t really have to as it’s obvious from the Cone what the models show. A lot of agreement in the 3 to 4 day and always one or two random models rushing off to somewhere else.  As always we go with the consensus. 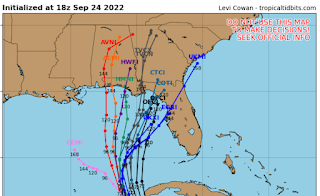 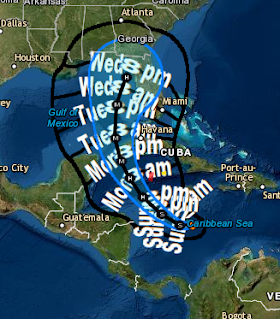 This is the Interactive Cone from the NHC that I suggest people learn to use as it has much good info and was developed to be helpful.  The cone below shows the salient piece of information in that if Ian behaves and follows the program it will be moving fast at the 4th to 5th day. That’s important as any wobble to the right can make landfall a city you didn’t expect vs a bit further to the West Florida coast.

Ian has many things going for it that could make it a Major Hurricane. It is traveling across an area of extremely hot water and it’s expected that a high aloft for a while …while over that very hot water will allow Ian to explode into a strong hurricane. It also has some dry air out ahead of it and that isn’t mention much but it’s very noticeable on the Water Varpor Loop and that makes me wonder. And, again as the headline from the NHC says the jet “finds Ian is still organizing” and that’s important as it’s taking it’s own sweet time. 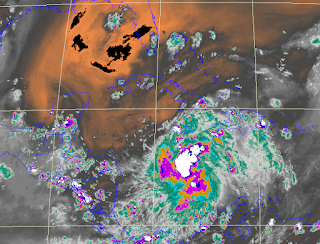 Color scheme above is not for Halloween.

There’s dry air up ahead of it.

It needs a way better center.

I will update later on tonight, but I want to say that for a while since the beginning I said the most likely target area for 98L would be the Big Bend area of Florida and this was days ago so I kept it wide. The models went left, the models went right and now the models snapped back and again I have to say “everyone from Mobile Bay, Alabama to Tampa Bay, Florida needs to watch Ian” as now 98L finally has a name. If only it finds it’s center we will have the Hurricane the models have been snffing out. Also mention depending on the cold front that is moving South shear will most likely appear and begin to weaken (hopefully) Ian before landfall.   And, that Jet is up there now trying to get a better handle on the upper air environment out ahead of Ian still down in the Cairbbean.

So this was my main zone from days ago.

From way back when…

I made a silly fast map on Google for a friend.

Not to drive it but to have a map.

Current cone from NHC is right there.

And, it can change as Ian evolves. 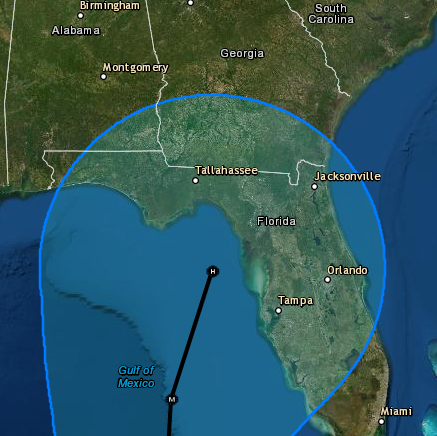 Ps.. as I said early on I am concerned on the timing.

This is all based on a fast moving storm on day 4-5.