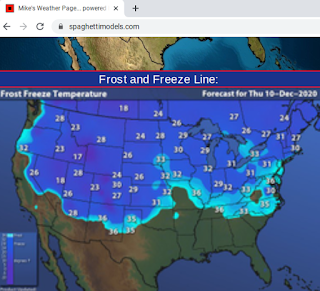 …after sunrise it warms up fast in Raleigh.

Lots of maps these days. 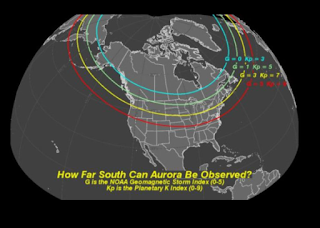 That’s where the Northern Lights might be seen tonight!

Some maps are more generous than others. 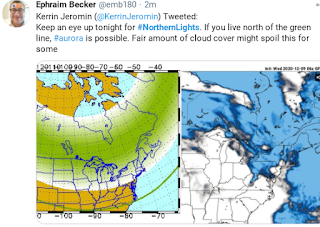 I’ll look late at night but not…

Not Miami but pretty bright.

I’ll definitely be watching online tho..

Google your location and “Northern Lights”

Find out your chances…

…give a look up into the sky.

I also watch the Weather Apps.

Sometimes before I go to sleep… 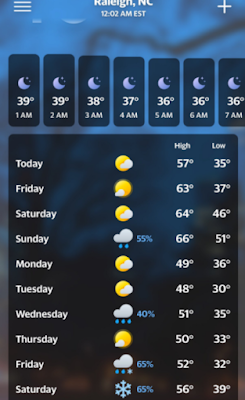 To my surprise late last night there was a snowflake.

A HUGE snowflake for NEXT Saturday!

And a small one the night on Friday.

I thought “yeah but will you love me tomorrow??”

I went to sleep.

And as expected “poof” it’s gone. 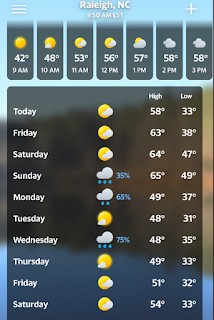 Yes it’s that time of year when I begin obsessively checking Apps for “snow” even though I don’t hold much by Weather Apps, especially in the 10 day forecast, I still can’t help checking to see if there’s a snowflake because well you know as long as there’s a chance 😉  Seriously, this is how I interpret the App thing … if I get two consecutive snowflakes six hours apart then I start checking models obsessively vs glancing at them and trying not to look or believe because the promise of snow is always on the 9th of 10th day. Ever notice that? It doesn’t magically appear on the 5th day or the 7th but just out of reach like a carrot beckoning the horse to come back real soon and click again. As I mentioned in a recent post the models have been very inconsistent still with either the Euro or the GFS jumping on board and the other totally ignoring it; each run varies greatly and that’s because it’s December and not late in January. Yet winter dreams spring eternal…….so I do check now and then. And I do watch models but I live by the Water Vapor loop and other satellite imagery and those weather experts who are almost always right for my location. Weather is location oriented, there could be a snow storm but we could get a dusting and Durham up the road got over a foot from the same surprise December snow storm a few years back.

What do the satellites show today? Winter in our part of the world and odd swirls in the Atlantic that if it was August might have gotten named this year but it’s December yet the NHC is always watching and so am I. But, I’m watching with the hope of snow not a rare December tropical entity. It does happen sometimes but only on the most rare occasions.

Why are models so unreliable in the long term? Because every inch, every bit of moisture extrapolated over time has a chance to be changed and impacted by so many intangibles. The successful launch of the rocket yesterday was suddenly not so successful because it missed it’s landing by the smallest amount of space because of a complicated reason I’m not going into but “BOOM!” and it was like the 4th of July in December. Yet, Elon Musk had said it was realistic that it might not land properly actually giving a perfect landing a low chance (I think one in three) and he reiterated that he always learns from these failures and that’s part of learning process. Sounds good but it would have been more successful had the rocket that was worth a fortune not gone up in flames, but then again knowledge is worth a fortune and we hopefully learn from our mistakes. I’ve learned not to trust models or Apps beyond the 3 day regarding snow in my part of North Carolina and while I may look up into the dark sky for a sign of color from the Northern Lights… I have very low expectations! 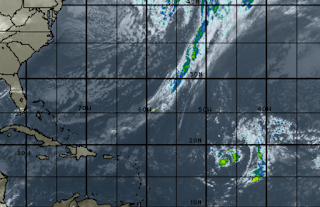 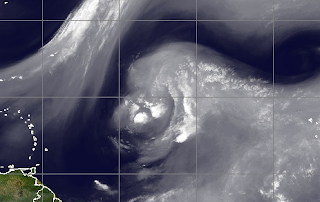 Cranky has left the room!

Very few who can write like that and understand patterns.

Be they historic patterns or a seasonal one that shows up.

But they change every six hours or so…

it’s like a dog chasing the the Amazon Truck!

My discussion on the Snowy App gone poof shows that well…

There are few people I really trust long range.

He is one of them.

One thing I do know for sure… 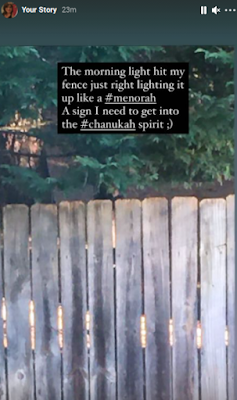 One of the things I have come to love in North Carolina is the way the light plays out all day in subtle ways as it moves with the location of the sun illuminating some different part of my backyard. It hits the high part of the Pine Trees as it begins to set and in the early morning it lights up lower areas that disappear as soon as the sun is overhead. It’s a weather ballet of darkness and light that goes on all day but only if you notice and pay attention at the right moment. Looks like a menorah lite up and yes only those slats were illuminatated so it’s my reminder to finish decorating the house and making sure I have everything for tonight’s dinner. If all goes well I’m making chicken schnitzel because you fry it in oil… and that’s why we make “latkes” (potato pancakes) and eat an inordinate amount of donuts and oh we snack on those little chocolate coins 😉 that cheap parents give you instead of real money… just kidding we got both… because my mother loved chocolate!

Happy Chanukah! May your life be lit up with whatever you love the most be it love from your favorite people, family, weather or even a geological treasure!

Twitter mostly weather but less so during the “off season” meaning not the hurricane season.

Instagram …whatever. Light up the darkness with acts of goodness and kindness and love!