The center of Tropical Storm Eta has emerged off the north coast of Cuba this morning and it is turning to the north as forecast.

The hurricane should start weakening by Wednesday and turn northeast, heading toward the Florida Peninsula, heading for a landfall near or north of Tampa late in the week or weekend. 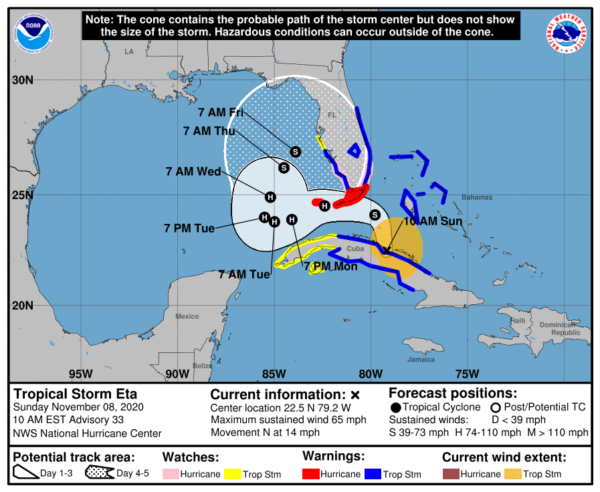 A Hurricane Warning and Storm Surge Warning has been issued for the
Florida Keys from Ocean Reef to the Dry Tortugas, including Florida
Bay.

A Storm Surge Warning is in effect for…
* Florida Keys from Ocean Reef to the Dry Tortugas, including
Florida Bay

A Storm Surge Watch is in effect for…
* Florida coast from Golden Beach to Bonita Beach, including
Biscayne Bay

A Hurricane Warning is in effect for…
* Florida Keys from Ocean Reef to the Dry Tortugas, including
Florida Bay

A Tropical Storm Watch is in effect for…
* The Cuban provinces of La Habana, Artemisa, Mayabeque, Pinar del
Rio, and the Isle of Youth
* Florida coast from north of Englewood to Anna Maria Island.

A Storm Surge Warning means there is a danger of life-threatening
inundation, from rising water moving inland from the coastline,
during the next 36 hours in the indicated locations. For a
depiction of areas at risk, please see the National Weather
Service Storm Surge Watch/Warning Graphic, available at
hurricanes.gov. This is a life-threatening situation. Persons
located within these areas should take all necessary actions to
protect life and property from rising water and the potential for
other dangerous conditions. Promptly follow evacuation and other
instructions from local officials.

A Hurricane Warning means that hurricane conditions are expected
somewhere within the warning area. A warning is typically issued
36 hours before the anticipated first occurrence of
tropical-storm-force winds, conditions that make outside
preparations difficult or dangerous. Preparations to protect life
and property should be rushed to completion.

A Storm Surge Watch means there is a possibility of life-
threatening inundation, from rising water moving inland from the
coastline, in the indicated locations during the next 48 hours.
For a depiction of areas at risk, please see the National Weather
Service Storm Surge Watch/Warning Graphic, available at
hurricanes.gov.

A Hurricane Watch means that hurricane conditions are possible
within the watch area, in this case within the next 24 hours.

A Tropical Storm Warning means that tropical storm conditions are
expected somewhere within the warning area, generally within 36
hours.

A Tropical Storm Watch means that tropical storm conditions are
possible within the watch area, generally within 48 hours.

Interests elsewhere in Cuba and the Florida peninsula should monitor
the progress of this system as additional Tropical Storm Watches or
Warnings could be required for some of these areas on Sunday.

DISCUSSION AND OUTLOOK
———————-
At 1000 AM EST (1500 UTC), data from a NOAA Hurricane Hunter
aircraft and Cuban radars indicate that the center of Tropical Storm
Eta was located just north of central Cuba near latitude 22.5
North, longitude 79.2 West. Eta is moving toward the north near 14
mph (22 km/h). A gradual turn toward the north-northwest is
expected by this afternoon, followed by a northwestward turn by this
evening, and a westward motion by early Monday. On the forecast
track, the center of Eta will continue to move over the Florida
Straits between Cuba and the Bahamas today, pass near or over the
Florida Keys tonight and early Monday, and be over the southeastern
Gulf of Mexico late Monday and Tuesday.

Reports from the reconnaissance aircraft indicate that maximum
sustained winds have increased to near 65 mph (100 km/h) with higher
gusts. Additional strengthening is forecast during the next 48
hours, and Eta could become a hurricane before it reaches the
Florida Keys tonight.

Tropical-storm-force winds extend outward up to 125 miles (205 km)
from the center.

RAINFALL: Eta is expected to produce the following rainfall amounts
through Friday morning:

STORM SURGE: A dangerous storm surge will raise water levels by as
much as 2 to 4 feet above normal tide levels along the coast of Cuba
near and to the east of where the center makes landfall. Near the
coast, the surge will be accompanied by large and destructive waves.

The deepest water will occur along the immediate coast in areas of
onshore winds, where the surge will be accompanied by large and
dangerous waves. Surge-related flooding depends on the relative
timing of the surge and the tidal cycle, and can vary greatly over
short distances. For information specific to your area, please see
products issued by your local National Weather Service forecast
office. 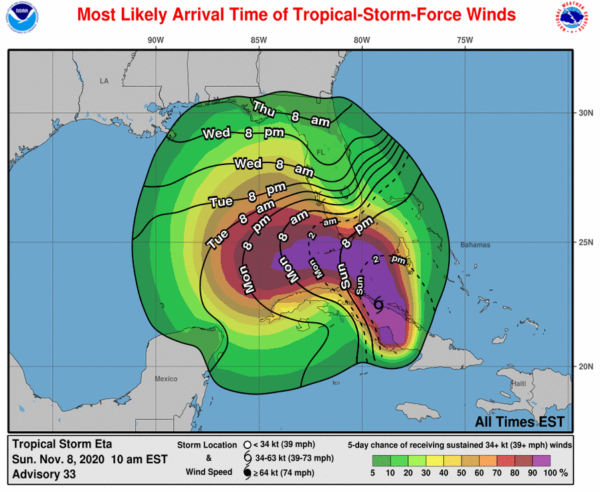 TORNADOES: A tornado or two may occur this evening through Monday
over south Florida and the Keys.

SURF: Swells generated by Eta are expected to affect the north
coast of Cuba, the northwestern Bahamas, southern Florida and the
Florida Keys during the next couple of days. Swells will gradually
subside along the south coast of Cuba, the Cayman Islands and
Jamaica later today. These swells are likely to cause
life-threatening surf and rip current conditions. Please consult
products from your local weather office.