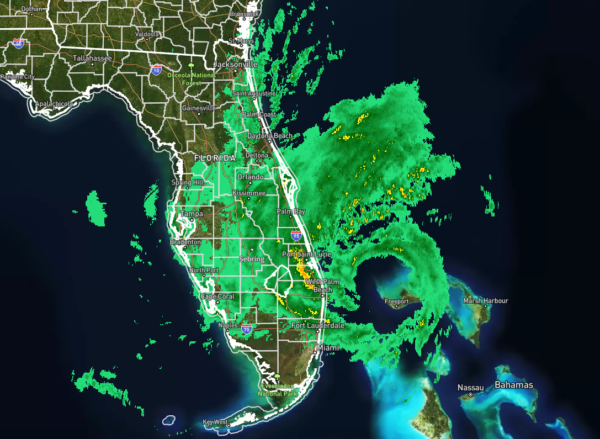 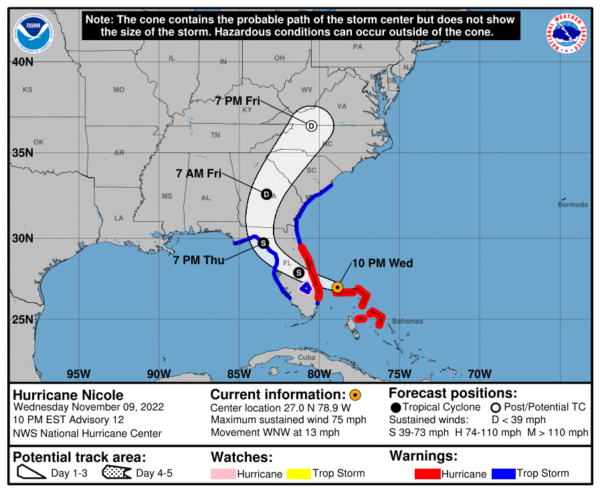 WATCHES AND WARNINGS
——————–
A Hurricane Warning is in effect for…
* The Abacos, Berry Islands, and Grand Bahama Island in the northwestern Bahamas
* Boca Raton to Flagler/Volusia County Line Florida

A Hurricane Watch is in effect for…
* Lake Okeechobee

DISCUSSION AND OUTLOOK
———————-
At 1000 PM EST (0300 UTC), the center of Hurricane Nicole was located near latitude 27.0 North, longitude 78.9 West. Nicole is moving toward the west-northwest near 13 mph (20 km/h). A turn toward the northwest is expected on Thursday, followed by a turn toward the north and north-northeast on Friday. On the forecast track, the center of Nicole will move onshore the east coast of Florida within the hurricane warning area late tonight or early Thursday. Nicole’s center is then expected to move across central and northern Florida into southern Georgia Thursday and Thursday night, and into the Carolinas Friday.

Maximum sustained winds are near 75 mph (120 km/h) with higher gusts. Little change in strength is expected until Nicole makes landfall along the Florida east coast. Nicole is expected to weaken while moving across Florida and the southeastern United States Thursday through Friday, and it is likely to become a post-tropical cyclone by Friday afternoon.

Storm surge could raise water levels by as much as 4 to 6 feet above normal tide levels along the immediate coast of the northwestern Bahamas in areas of onshore winds.

The deepest water will occur along the immediate coast near and to the north of the landfall location, where the surge will be accompanied by large and destructive waves. Surge-related flooding depends on the relative timing of the surge and the tidal cycle, and can vary greatly over short distances.

RAINFALL: Nicole is expected to produce the following rainfall amounts through Saturday:

Northwest Bahamas into the eastern, central and northern portions of the Florida Peninsula: 3 to 5 inches with local maxima of 8 inches.

Southeast into the southern and central Appalachians, western Mid-Atlantic, and eastern portions of Tennessee, Kentucky, and Ohio: 2 to 4 inches with local maxima of 6 inches along the Blue Ridge.

Flash and urban flooding will be possible, along with renewed river rises on the St. Johns River, across the Florida Peninsula today into Thursday. Heavy rainfall from this system will spread northward across portions of the Southeast, eastern Ohio Valley, Mid-Atlantic, and New England Thursday through Saturday, where limited flooding impacts will be possible.

TORNADOES: A few tornadoes will be possible overnight into early Thursday morning across east-central to northeast Florida. The tornado threat will increase and gradually expand north through the day into southeast Georgia and southern South Carolina. Some tornado risk should continue Thursday night into early Friday across eastern South Carolina and southeast North Carolina. Tornadoes will again be possible during the day Friday centered on central to eastern North Carolina into southeast Virginia.

SURF: Large swells generated by Nicole will affect the northwestern Bahamas, the east coast of Florida, and much of the southeastern United States coast during the next few days. These swells are likely to cause life-threatening surf and rip current conditions.