Iota became a hurricane overnight and has strengthened by 40 mph over the past 24 hours. 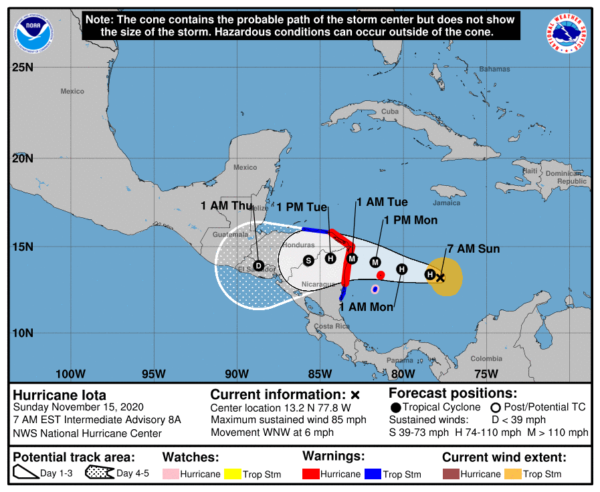 This trend will continue for the next 36 hours and Iota is expected to be a major hurricane with top winds of 130 mph when it approaches the coast of Nicaragua just south of the Honduras border late Monday night/early Tuesday.

A Hurricane Watch is in effect for…
* San Andres

A Hurricane Warning means that hurricane conditions are expected
somewhere within the warning area. A warning is typically issued
36 hours before the anticipated first occurrence of
tropical-storm-force winds, conditions that make outside
preparations difficult or dangerous. Preparations to protect life
and property should be rushed to completion.

A Hurricane Watch means that hurricane conditions are possible
within the watch area.

A Tropical Storm Warning means that tropical storm conditions are
expected somewhere within the warning area within 36 hours.

Interests elsewhere in Nicaragua and Honduras should monitor the
progress of Iota.

For storm information specific to your area, please monitor
products issued by your national meteorological service.

DISCUSSION AND OUTLOOK
———————-
At 700 AM EST (1200 UTC), the center of Hurricane Iota was located
near latitude 13.2 North, longitude 77.8 West. Iota is moving toward
the west-northwest near 6 mph (9 km/h). A westward to
west-northwestward motion is expected during the next couple of days
until landfall occurs in Central America. On the forecast track,
Iota will move across the southwestern Caribbean Sea today, pass
near or over Providencia island on Monday, and approach the coasts
of Nicaragua and northeastern Honduras Monday night.

Maximum sustained winds have increased to near 85 mph (140 km/h)
with higher gusts. Rapid strengthening is expected during the next
day or two, and Iota is forecast to be a major hurricane when it
approaches Central America.

HAZARDS AFFECTING LAND
———————-
Key messages for Hurricane Iota can be found in the Tropical Cyclone
Discussion under AWIPS header MIATCDAT1, WMO header WTNT41 KNHC
and on the web at www.hurricanes.gov/text/MIATCDAT1.shtml.

RAINFALL: Iota is expected to produce the following rainfall
accumulations through Thursday:

STORM SURGE: A dangerous storm surge will raise water levels by as
much as 9 to 13 feet above normal tide levels in areas of onshore
winds along the coast of Nicaragua and Honduras. Near the coast,
the surge will be accompanied by large and destructive waves.

SURF: Swells generated by Iota will affect portions of the coast of
Colombia, and the southern coasts of Hispaniola and Jamaica during
the next day or two. Swells will begin to reach the coasts of
Nicaragua and Honduras tonight and Monday. These swells are
likely to cause life-threatening surf and rip current conditions.
Please consult products from your local weather office.