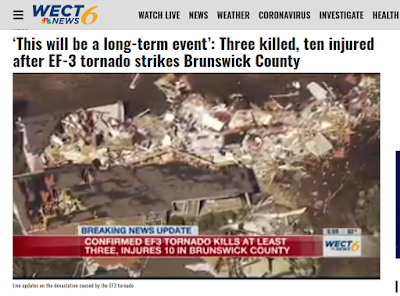 It’s just really heartbreaking to see one of the most beautiful areas of North Carolina still cleaning up from a hurricane traumatized by a tornado.  What are the chances a place gets hit by two weather disasters that close together? Apparently this year not that unusual as both North Carolina, Texas, Louisiana and Northern Florida pounded by various types of tropical weather in the 2020 Hurricane Season has been pounded by various types of winter weather and severe weather this Winter of 2020 and 2021… and the beat goes on and on.

In my last post I raised the concern for nighttime tornadoes in North Carolina this time of year that are especially deadly, seemingly coming out of nowhere and doing more damage than a hurricane with way less warning. I’ll say it again and again… I’ll take a hurricane over a tornado any time as you can see them coming as a real entity, whereas a EF3 can spin up suddenly in a line of severe weather with NO TORNADO WATCH posted by the NWS just your run of the mill severe weather warning put out. I know this bugs the hell out of Mike and he has ranted about it many times on his Facebook Live as frequently areas of Central Florida are slammed by numerous tornadoes without a watch even posted. I’m not sure why the NWS has pulled back on the watches as I remember them more years back, but I’d rather have a watch posted than none and be blind sided by a EF3. If I can see the environment is ripe for night time tornadoes, in my humble opinion, a Tornado Watch could have been posted. I was especially worried when I saw the severe thunderstorm line come through my area a few hours earlier than expected as Raleigh was supposed to have it come through around 1AM to 3AM and the tornado hit just before Midnight way down by the South Carolina as it cruised through with a punch rarely seen in that area by anything other than a strong landfalling hurricane and everyone there said it was way worse than your regular NC hurricane. My brother in Greece sent me this tweet yesterday that I had missed, the same area of Southwestern Louisiana had Thundersnow and Thundersleet six months after hosting Hurricane Laura that made landfall in that same area. I’m beginning to see a pattern here… how bout you? 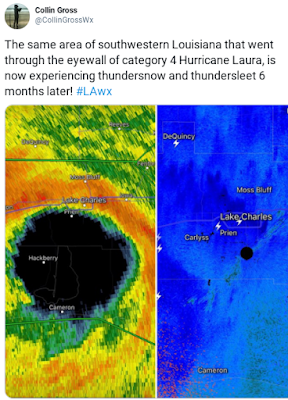 Speaking of patterns my brother in Thessaloniki had a winter storm the other day and often when he gets winter weather I do in the Carolinas..I’m not sure what the connection is but I’ve noticed it so possibly this new winter storm will shower us with sleet or freezing rain creating an Icy mess for many in our state though how far South it will go is up for debate as models are trending deeper down across the State and I’ve suddenly heard the Sandhills could get a drop of freezing rain which yesterday was said about my neck of the woods up in Raleigh so stay tuned…   As always weather happens in real time, stay prepared in case you lose power the way many in Texas and a good part of the Central South did earlier in the week and many still do not have power. I know people tell me I don’t want an Ice Storm (lived here long enough to have had a few mild ones so I’m familiar with them) but after growing up in Florida and losing power for over a week in late summer with no air movement and 89 degrees every day I’d rather have cold weather and bundle up in layers if I had to lose power… never a great situation and those who prepared are better off so remember that during Winter or Hurricane Season always be prepared. 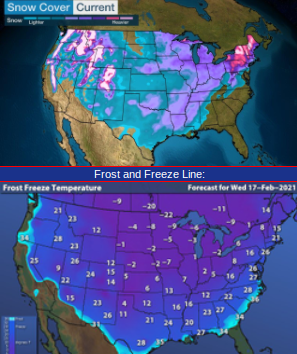 He’s a man for all seasons weather wise!

Been a harsh winter in various ways this year.

I see no reason to think this will change soon.

Most models show winter holding on through March.

A few days of warm ups and then
“Bamn, Baby I’m back… BRRRR”

I do watch patterns though and I’ve noted how many times Texas has been hit and how deep the fronts have driven down deep into South Florida so despite the constant training of weather over Louisiana still this winter, this hurricane season could bring more trouble to Texas and parts of Florida than the 2020 Hurricane Season did.  You know the old song “second verse, same as the first” a really good song sung by Peter Noone that rhymes with the town of Boone in North Carolina!

So as always be prepared and I do mean that. I have a box all year that I regularly borrow from and replace that has long lasting candles, matches, canned Starbucks Espresso (after Hurricane Andrew I will never ever not include canned coffee in my hurricane supplies), easy to open Tuna, crackers and lots of stuff like that stored around the house because be it winter or hurricane season if the power goes out it’s important to have good stuff you need along with all that nosh you keep in the house in case you lose power. Cookies are good but they only go so far it’s good to have some protein and caffeine stored away as they give you energy…you know like batteries for a radio … because when the power goes out  …. so does the cable. Keep phones fully powered and hopefully power stays on and everything looks like a winter wonderland. But after days of frigid weather in Texas, people in the Houston area would like the Polar Vortex of 2021 to hit the road Jack and go somewhere else!

7:00 AM | *A nice stretch of weather across central Florida to last through the upcoming weekend* — Perspecta Weather