Worth mentioning here NRL has Blas Info Up. 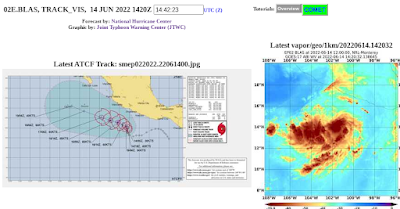 Expect TWO-E to get a name today.

So it would seem.

Westbound unlike the orange X

8 AM. See our orange jelly bean. 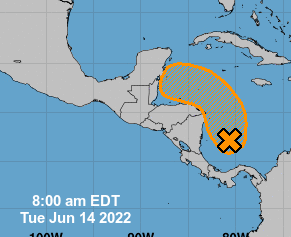 EPAC getting closer to a named storm. 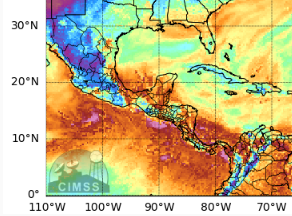 There’s the whole area in one shot.

Why you ask it this area so hot? 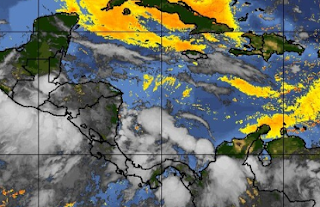 Lack of Saharan Dust is one of the reasons.

Everything in Tropical Development hinges on several factors but the main factor is timing. IF a wave can get into an area where the water is relatively warm, there is light shear there and not much SAL then it has a shot at development. The shear doesn’t knock the thunderstorm tops off, the dry Saharan Dust doesn’t suck all the moisture out of the storms that are there and so between bursts of SAL it has a possibility of forming. Models are good, but until a center forms and ALIGNS .. lining up vertically in the atmosphere the models are throwing darts in the dark in the direction of a possible storm track.

So let’s look at the Saharan Dust as in it’s whole signature. It’s got a short term lease in the MDR part of the Atlantic where tropical waves try to slide under the dusty radar to get to an area more favorable for development. People think this is good, but no not really it’s not good and the reason is those strong, stubborn waves get closer to our side of the world where they form close in. IF they were to be strong and form out near Africa then they recurve gracefully up into the Atlantic and never make it to the Islands or Florida or the Carolinas even.  Note where the EPAC and the area being watched in the SW Caribbean there is less dust.  And, SAL moves in real time, shapeshifting it’s way across the Atlantic.  This is why stubborn, sneaky systems that want a name slide along the coast of Central America, snaking around the curves of the coastline, hugging it while trying to take their time to find the spot to develop. Sometimes it’s further South and other times it’s near the tip of the Yucatan and other times after dramatically crossing the flatlands of the Yucatan they form in the Bay of Campeche.

EPAC systems form earlier in the season and are more protected from the dust. NOW is their time when they begin to shine, but to the West a stubborn wave is trying it’s best to stack up to the wildest model’s dreams of glory. Other times the models wane as if they had invested too heavily in Crypto and their favorite stocks are diving down every day. Then when they find some breathing room and they flare up, pull together and often this time of year head towards Mexico or even Tex Mex if they wait too long to develop and some steering current reaches down and grabs them like the olive in the bottom of the jar!

And THAT’S THE WAY OF THE WORLD IN THE TROPICS IN JUNE!

We are in June.

In my part of the world I’m laying low because it’s forecast to be 100 degrees today (not so normal) and the Heat Index will be close to 110 (really not normal) and floods are washing away homes near Yellowstone. In some geology chat now they are quietly debating the weight of the floods on that geological terrain, but they do it in whispers because it’s like screaming Chupacabra in Miami ….shhhh we don’t do that out loud nor do we scream shark even if we see a shark in the water.  Actually in Miami we just stay in AC until late October or early November brings the first real cold front and that is what I’m doing in Raleigh today.

Even inside the AC and under the ceiling fan the heat gets to you as if it’s a real living thing, finding it’s way inside past the door, through the walls and you can literally feel it in your head. This is why people drink Rum and Coke and Mint Juleps in the South. 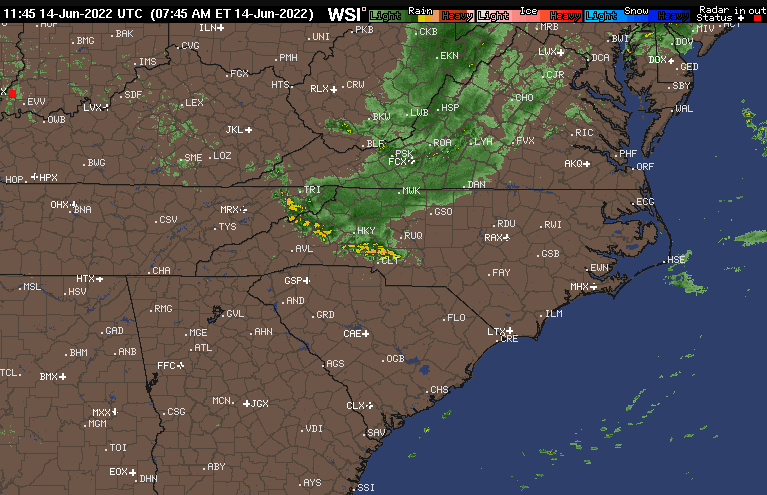 This rain is forecast to mostly peter out later today.

After a hurricane people get cuts on broken glass.

Some kid somewhere has to pick it up to look at it.

…or dreams of cooling rain.

It’s gotta a way to go before Mexico…