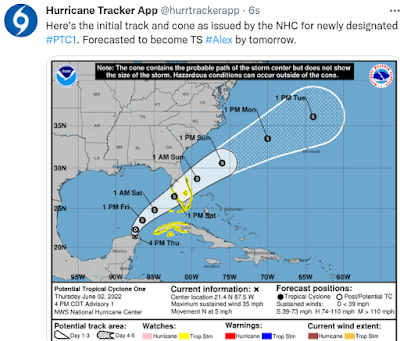 Important Cone to Look at…….

Bottom Line here is it will be a Messy Saturday and into Sunday over a good part of Florida, especially South Florida no matter where the exact landfall will be as there will be much displaced weather. Hunker down, don’t go driving around. Expect power outages and flooding especially in the areas prone to flooding. And, even in areas not prone to flooding if heavy amounts of tropical rain, copious amounts fall at an incredible rate …which is common in June Tropical Storms… and when live wires come down into puddles that you can’t see you could get electrocuted when walking into that puddle with your beloved pooch! People died in Irene in SFL in 1999 when out walking the dog; Mother, children, neighbor’s children and I’m pretty sure the pooch died too. So don’t laugh this off because it doesn’t have 150 MPH winds and storm surge! Again don’t look at the Cone and say “Oh I don’t live near Naples” because I’m in Miami.. Hunker Down, Ride it Out. Feel free to send pictures @bobbistorm on Twitter..

Again what is a PTC? It’s a Potential Tropical Cyclone. Note official warnings from NHC below.

From NHC Discussion above.

Will be TS Alex eventually. 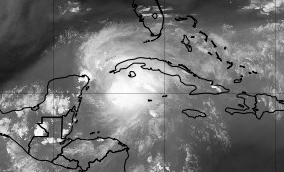 Currently the poorly defined, possible center we are tracking is far to the left of the beautiful blob of weather that looks like a strong Tropical Storm. Note the tip of the Yucatan is where the center may be, BUT often centers shift and redevelop under the stronger convection. IF that happened it would be way closer near Cuba.  Rain is currently the name of the game regarding PTC ONE aka soon to be Alex. 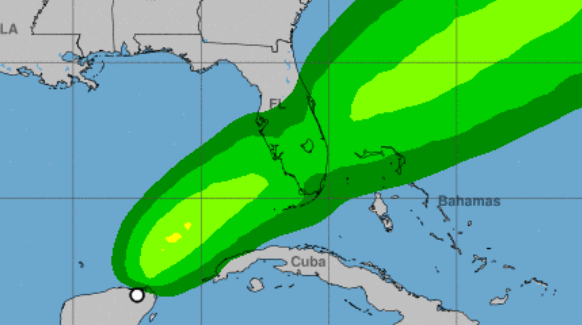 Friday we will know better the exact details.

But the WATCH is up NOW!

Again the heavy storms in Miami today are NOT from PTC1

BUT that consistent convection only sucks it in.

song of the day