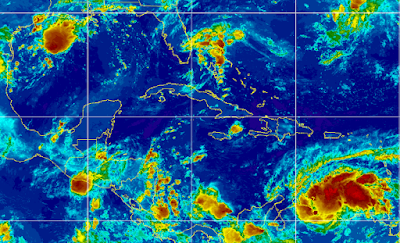 A bit impressed with Potential Tropical Cyclone Two in that it’s managed to maintain a large shield of convection with a rudimentary look of a poorly defined tropical depression or named storm! It takes more than good satellite presentation and consistency to get a name, and between Recon and Ground Observations we should know soon enough if it gets one today or not. My money is on an upgrade, but I’m not putting much money on it mind you!

There is what appears to me a very small closed circulation hiding along the coastline and it has more land to cross before it gets into the sweet spot of the SW Carib where it could intensify into a formidable little storm. The NHC has it at 70 MPH way down the line. Forecaster Blake wrote a good, honest description and I suggest you read the discussion yourself as words matter more than pictures. In this case, despite a picture making it look like a very small cyclone the observations do not show that is true and it’s moving fast on it’s way towards the Eastern Pacific where it may shine as named storm there.  Good discussion, link below. 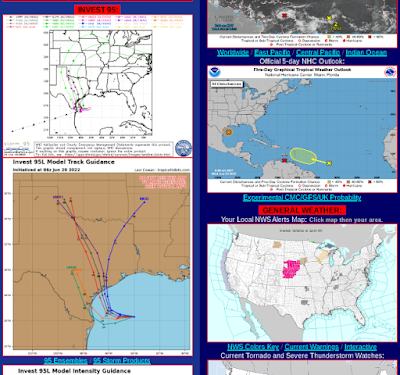 Ths Gulf of Mexico Mess is a Problem.

It’s a real weather maker for Texas and beyond!

Louisiana also needs to watch this because of shear. 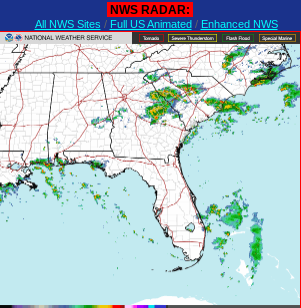 Lastly there is a Mid Level Low off the coast of FL.

It already worked it’s way down from Upper Level Low.

It’s going to amp up the weather in S FLA today.

Could it do more?

You never know, homegrown storms in June are a thing!

And again we are moving towards July 4th Weekend.

So ANY heavy weather along the GOM is a problem.

A problem for the tourists and for the beach economy.

A bad July 4th is hard to recoup losses from… 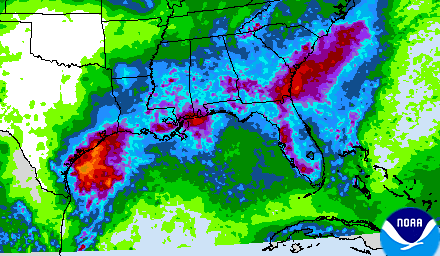 And, RAIN is in the forecast for the next 5 days!

Across a good part of the South’s beaches…

Not Chamber of Commerce Weather!

Really lastly there are always waves out there.

Some models develop them…. 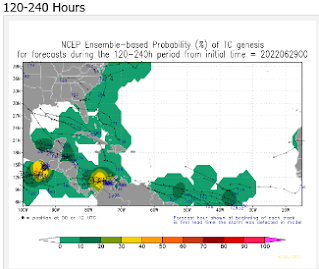 I’ll update later today if and when the NHC does.

Also a bit of my personal story as I’ve been away.

Many of you have been patient.

And I appreciate it! 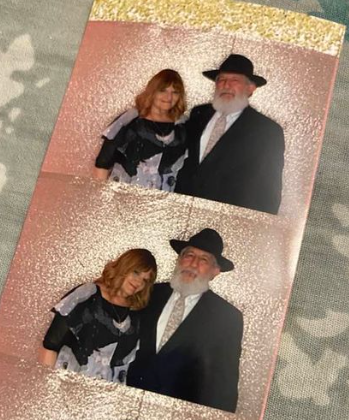 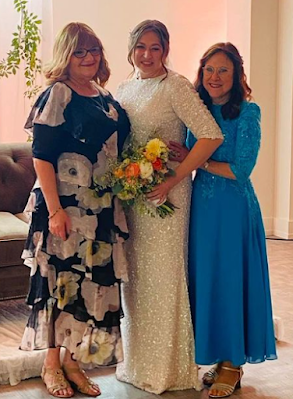 That’s me on the left.

Blonde for the summer 😉

On the far right is my friend Leah.

Close friends in LA in the 80s…

Our kids got married this Sunday!

I wore a kind of Southern Flapper Dress.

…that was the idea.

Fun to dance in…

Wednesday morning here in Raleigh. I have to type that to remind myself that it is Wednesday as for the last week I’ve been praying everyone’s flights are on time to my son’s wedding as the week or two before has been nothing but cancellations and serious delays in air travel. My brother went to Seattle for a cruise to Alaska (he loves Alaska) and their 10 AM flight out of FLL was delayed 4 times and didn’t take off until 10 PM so you can imagine how I felt about the groom and his 3 children flying in the morning of the wedding. Then there’s the constant threat of Covid sidelining a member of the wedding party at any moment, along with the awareness that if you travel to such events or anywhere you take the risk of getting Covid or the common cold or possibly a nervous breakdown waiting for your flight to finally take off. We drove down to Atlanta from Raleigh, but many flew in from Miami and Los Angeles.

So that happened and yes it happened. The jury is out on who is sick or not but so far everyone is hanging in there and managed their trips back home. We hit a total standstill on the highway out of Atlanta about a quarter of the way to Charlotte and rather than sit on the highway an estimated hour we got off and drove the back roads. I love back roads, especially in the South, they never really disappoint and are never boring. Okay, we got in way later than we might have had the boring highway route cooperated. And, as we drove through very rural farm country, very small towns and along side a few National Forests (Sumter, Uwharrie to name just two) we usually only had one bar on our different T-Mobile phones and sometimes barely a bar so I was totally out of it Internet wise and yet I enjoyed the ride as we listed to the Margaritaville channel on the car radio. Okay every time I got two bars I went to Twitter fast.

We stayed in Atlanta by an amazing couple in a beautiful home with incredible accomodations that allowed my husband and I to have one guest suite and my grandchildren were able to stay in another suite next door; a teenage granddaughter happily got the 3rd floor attic room to herself! But, they had no WiFi on purpose and for some reason that part of Sandy Springs has crappy service on T-Mobile on every phone with that carrier. Most of the people there do not use that carrier. Oh, well… the phone worked, we texted, Whatsapped and occasionally a photo was able to be shared. Slow phone service is better than nothing. Why do they not have WiFi is a good question. It’s by choice as they both work for an organization that they are extremely dedicated to and they are young and they decided they can do everything on their phones, but if they had WiFi they’d barely talk to eachother or do anything but work. So they work at their office around the corner during the day and at home they share their lives together talking, planning and using their phones with the better carrier to do anything they might do on WiFi other than get lost on their computers.  Different strokes for different folks and they are good folks and Millenials are different from Baby Boomers who seem to have to have access to everything out there available immediately. In truth, if you have a cellphone and are on a trip for a family wedding/reunion with people you haven’t seen in a long while, events running nonstop to go to and preparations for a wedding why do you really need to be online nonstop 24/7 …especially when there is nothing really happening in the tropics but conjecture and curiosity?

Would you beleive that during the actual wedding ceremony I put my phone away and let all the other people there take pictures!! And, they did, now my phone is filled with pics from WhatsApp and Messenger and well why can’t we go back to AOL where everyone communicated on ONE PLATFORM? Oh well. You can’t go back can you??

I had a lot of quality time with my grandchildren and with old friends from both Raleigh (who moved away) and LA where many of us lived in the 1980s. I lived in the minute for a few days of my life for a change and it was fine and dandy. There also wasn’t a Major Hurricane barreling towards a date with some coastal city going on… just some yellow, orange and red circles and a potential tropical cyclone. This is why many of my friends at the NHC over time take their vacations in June, because June is usually too soon. July, get ready and August you must as the old rhyme goes.

I’m back, I’m here and I’ll be laying low today and not doing much but tracking the tropics.

Two things if you are still here.

1… My daughter-in-law’s nephew is about to be 10 years old and he is the most amazing amateur meteorologist who lives on Discovery Channel and loves his Pro Radar etc and devours Zoom Earth! You can learn a lot about meteorology online as a child even without being online in groups or with total access to the Internet. His father, who taught science years back, seeds this child’s love for Earth Science with carefully approved sites and Apps and the kid knows every detail of every hurricane over the past two years, though admitted sometimes he gets 2020 confused for “a minute” with 2021 storms. He lives in California and he first became interested in cyclones because of Hurricane Laura. He wants to call me his “step-grandmother” he told his mother but that’s not really the right word but he is friends with BobbiStorm 😉 his Aunt’s mother-in-law LOL. Unreal! 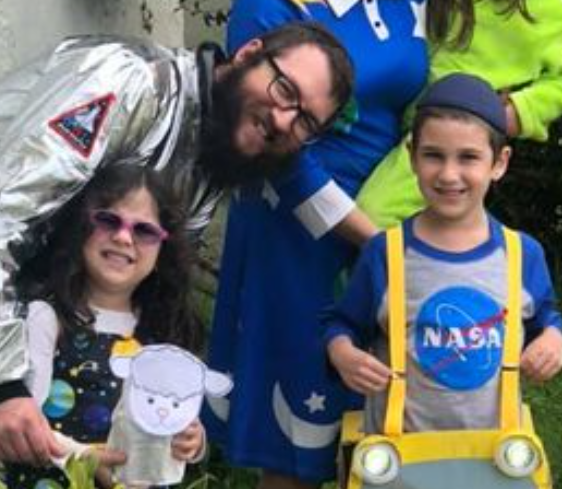 The little kid on the right in the NASA tee shirt!

Dressed for the holiday of Purim.

Science lover that he is…

…I’m not making this up.

My son said “you met your match”

2… I have a friend who I was in varous writing groups with when I first moved to Raleigh who recently posted her thoughts on a recent trip that she and her husband took and how difficult it is for people with disabilities and note they both have strong disabilities; he more so than her but they both manage marvelously usually. Best advice being “drive if you can” and if you cannot know it’s not so easy. So going to post her thoughts her as we go into Summer Travel and possibly evacuations for hurricanes coming to visit!

You can read her article there as well as her recent thoughts on their trip and other things that may interest you. 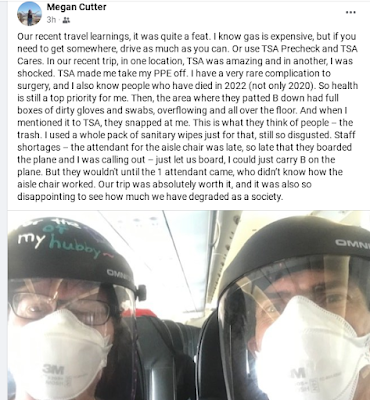 Note I have a son who had a trip to JFK from MIA a few weeks back in the late evening, after many delays they rescheduled him on a flight the next day. My brother spent over 10 hours at MIA waiting in a very crowded, fairly dirty terminal to go to Seattle for a cruise that luckily wasn’t for a few days as he is visiting family there as well. Traveler beware I suppose is the point here.

AND AS IT RELATES TO HURRICANES……… PLAN AHEAD and have a Plan A and a Plan B because you may seriously need Plan B and Plan C is going to probably be hunker down anywhere you can!

Thanks for reading… I’ll update the blog when the NHC updates either TWO or there is more information on the other areas I spoke about at the top.

Ps excuse any typos I’m exhausted. Going to watch Mike do is Facebook Live and go back to bed to rest a bit!