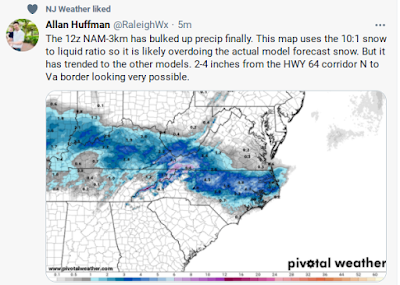 Allan tends to be my “go to” source in Raleigh regarding models.

Over time he has been very consistent.

But snow forecasting is always an edgy proposition here.

Between the mountains and the sea…

Elevation matters but so does location of the system itself.

And they set up in real time… like flying in under the radar. 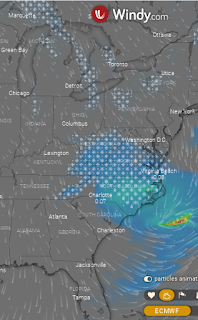 The “King Euro” is shown above.

It’s not always right but people ask so there it is..

A fantastic site to while away the hours on….

Similar but a bit different. 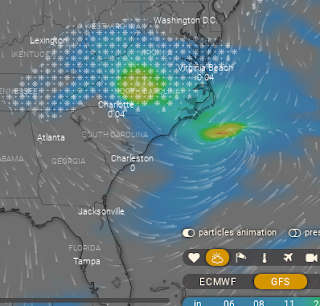 And since we are in the “overnight” window…

..the NAM weighs in below. 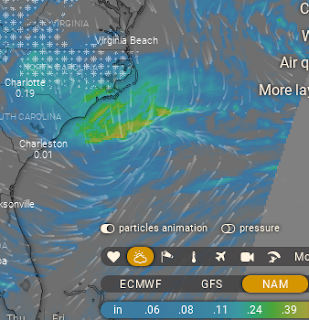 But snow is never a sure thing in the Triangle.

But trust me I am sure hoping we slammed.

Yesterday the high temperature forecast was pretty much a disaster as cold air damning set up and cooler than expected temperatures by up to a ten degree difference. A cold wedge set up and won out over the expected warmer temperatures; worked for me as I do not want warm temperatures in January unless I’m visiting Miami but it made me feel the chance of snow this week was definitely a possibility. I actually stay here in the winter and go to Miami in the summer… I know crazy.

The models play this “maybe yes” “maybe no” “oh it’s going around you” (yes that happens in Raleigh) and the Weather Apps change their snowflake to raindrops graphics every six hours based on new models. What they put in days ago they took away and the one small snowflake next to two raindrops began to creep back in. I’ve lived here long enough (now longer than I lived in California…) to know that until “it” sets up in real time we are basically making the best educated guess and it’s not a “thing” until snowflakes begin to continually fall from the sky. I’ve been burned so many times that I’ve learned not to wear my snowy heart on my sleeve and keep it inside where I nourish it and keep on hoping with the knowledge that it’s late January going into February that the odds are on my side that one of these systems will actually produce some form of frozen precipitation. I’m not picky, I’ll take any of them but I’d prefer snow falling in the daytime to sleet any day, but I’ll take sleet if it’s on the menu. 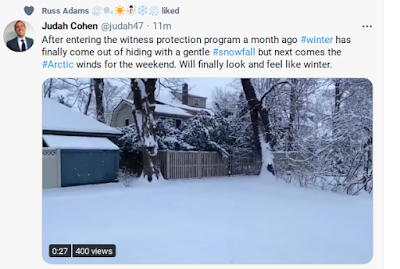 Tomorrow at this time we will know just what this part of North Carolina that’s kind of the Piedmont but at the base so it’s less of a sure thing than say Greensboro that always wins the snow or thunderstorm lotto. It’s good to have a sense of humor when dealing with snow possibilities in this particular region. It’s been a weird year, let’s be honest, Texas has had more snow than most of New England and NE got all excited last night because it actually snowed. The storm track down by Louisiana that was set in tropical stone this past hurricane season is still creating a storm track this winter that may amp up this Spring once Tornado Season sets up but they had a taste of that in Alabama yesterday with a deadly EF3 Tornado. Yes, I always think on the Hurricane Season but hey with snowflakes in my forecast that’s on the back burner. 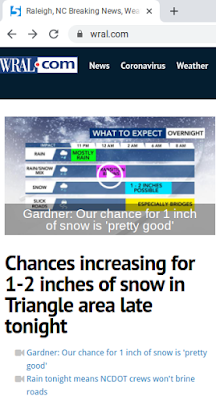 Note the bottom line…
They aren’t brining the roads.

Because rain is expected first so…

…that always sets us up for “huh? what happened?”

The truth is I love living here and yes it definitely took a while. I’m a Capricorn, so I love that cold, dark winter look that this region gets this time of year punctuated by dark green pine trees and always stunning magnolia trees – when the sun comes out and the sky is Carolina Blue it’s beautiful! I also love the way naked trees look each with their own unique pattern of branches that this time of year can look so white they look like twisted ivory. Spring is never far off in the future in this region so I savor ever moment of “winter” be it a wintry look, fresh cool air, a chance to wear boots or leggings and yet not be encumbered by heavy winter gear such as gloves, mittens or scarves though at least once a year we drag them out. I get a chance of hurricanes and a beach close enough away that I can go and play in Tropical Storms taking images and finding a restaurant somewhere open in Wilmington on the River Walk and one of the best Trader Joes anywhere. But I do wish we had just a little more snow and I do wish I could rely on any forecast, even by the experts, but I’ve learned Winter Storms in these parts set up in real time so I’ve learned to go with the flow and just keep praying it will snow. 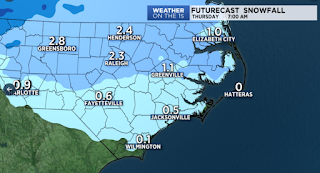 Tomorrow I will be either heartbroken weather wise..

…or excited beyond words to see snow on the ground.

Going to live in my “maybe” snow bubble dreams today.

Malibu got snow and so did Arizona.

…I’ve noticed we get some snow and vice a versa.

So here’s to hoping…

…don’t bring me down!