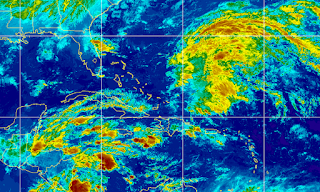 This is the area in the Atlantic with 10%

Actually looks nicer than only 10%

In the Caribbean down to the SW…

This is where we are in November.

..nothing expected to develop. 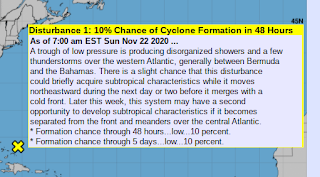 NHC lowered this from 20%

The old purple blog graphic below. 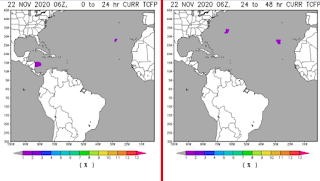 But a front is forecast to sweep across the SE.

And should sweep anything there out to sea. 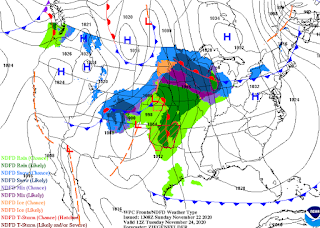 Pretty much says it all.

Winter in places that get winter in November.

Caribbean is slowly closing down. 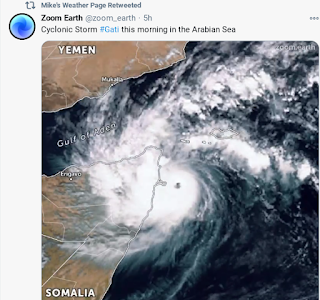 In Miami Beach in the old days…

There was a restaurant in Miami Beach for years on West Avenue next to the school where I taught and not far from a place where I lived and it was open seasonally. That means most of the year it was boarded up and then suddenly they’d start cleaning the exterior, the driveway and signs of life appeared. Locals with money loved it, movie stars came and went and supposedly the mob loved it and well rumor had it that’s where they ate when they wanted good food and to feel safe. Who know? Not me because I was kosher and just walked by peering in a bit and wondering. The chef though was my neighbor and my friend who lived downstairs had him cook for us often (in her kitchen after buying him whatever ingredients he asked for that we could get at Epicure Market) and gotta tell you those people at Gatti’s ate really well.

The moral of this story and trip down memory lane is that you gotta have the ingredients to make a hurricane and generally the Tropical Atlantic has a season when it is open. Stray storms can form the way hotels in Miami opened up for a specific holiday even though the majority of the snow bird tourists had not flown South. I asked my father when I was young whey they call them “snow birds” and he said because “they leave as soon as it snows and fly South” but added “usually they wait til after Thanksgiving with the family and then hit the road to Florida. That explains why I never had Thanksgiving with his side of the family that came down from the Bronx and when I think of Thanksgiving I think of my Uncle who was an old Jewish Southerner Cracker who loved Thanksgiving; my earliest memories of Thanksgiving are him talking to me as we set the table with little wax Pilgrim figures my Aunt kept and well that’s the story of…that’s the glory of the memories of people we love and their impact on our life. They might have been candles that were never lit in retrospect but I digress.

So….. not saying it’s over because things “pop up” this year but this area off the coast that looks like it’s getting dressed to go out and party is going to be carried away from the cold front so maybe the area near Portugal for Subtropical? My gosh that area has been almost as hot as Louisiana.

Wishing y’all a beautiful Thanksgiving week! It’s not the Thanksgiving movie scenes are made of but make the most of what you got and share and tell people you care and give thanks for what you got if only the reality that we are here to celebrate Thanksgiving in whatever way we do. And, look at it this way … with few family members there you can do it however YOU like!

Ps… a good article on November Hurricanes from a newspaper that was always weather friendly way back when in the old days of the Internet.