This is why you never just look at the 2 day.

This could be a problem. 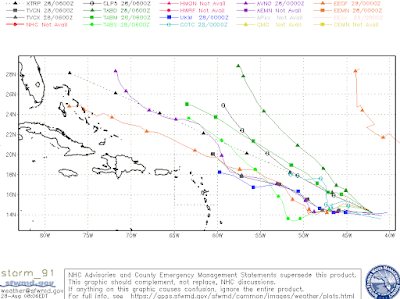 Well, that could be a problem. 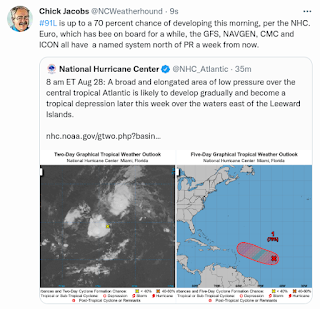 Chick is from NC.

He is weighing in early this morning.

That tells me something.

The models definitely show it as a threat to the coastline, however they also show avenues of escape that would allow it to curve away. The truth is until it forms, wraps up and has a center we won’t k now for sure. It’s a bit of a mess, yet it looks like it’s smirking at us in that image Chick posted above. Kind of a warning shot across our bow to get our attention. Check out our hurricane supplies, think again on a plan. And, obviously hope it curves gracefully out to sea. Hurricanes (this is not even a tropical depression yet) can be like those wild carnival rides, a roller coaster of emotion as you feel the adrenaline rush and the excitement flow and then you go down the drop and it coasts into it’s stall waiting for the next person to terrify for the next 3 minute ride. And, other times like Andrew or Katrina they rip you to shreds and rip away your false sense of security.

Where does it form?

When does it form?

What are the steering currents like when it forms, where it forms???

Are the steering currents locked in or wonky and models show multiple possibilities.

Don’t know yet, too soon to tell.

But what I will say is the water is incredibly warm, warmer than usual for this time of year up and down the East Coast, but especially UP the coast. 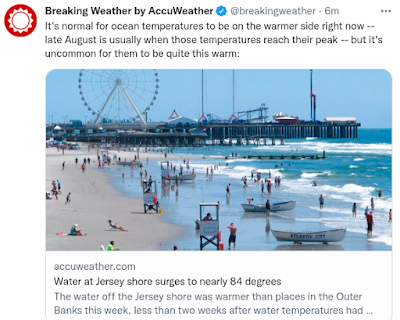 Accuweather brought this up this morning.

It could be a problem if it real hurricane took a run at the coast.

At my daughter’s house in Hallandale.

Hallandale is young now, fun, near the beach.

Some of the kids are coming over.

Yesterday was awesome. I’ve had two best friends since the late 1980s after I moved back to Florida from California. We’ve been through a lot together the three us, mostly funny times and hard times. Three weeks ago Sharon passed away leaving us sad as if we lost a sister. This week there is a commemoration for Sharon so in town for that along with other happy events. My friend and I had fun, large Sabbath dinner with friends talking, the two of us had long talks, walks and we even danced the Charletson last night and it was fun to be silly again. Stayed up late like kids, woke up late and my daughter is cooking breakfast for a family brunch. I’m not going to talk on the tropical depression forming (unless they bring it up) and that a named hurricane could be headed towards Florida, Carolinas, East Coast and who knows if it would threaten Florida or the Florida Keys it could get into to Gulf of Mexico. There are just so many options and possibilities, because honestsly it has not pulled together for us to know just what we have on special on Labor Day Weekend for a tropical buffett. Just too soon to tell, but Labor Day is the time frame that everyone blows it a kiss as it passes by or runs for cover and to get out of town!

Ps……….Sharon’s granddaughter’s name is Daniella so pretty sure in one way or the other Danielle in the Atlantic may grab everyone’s attention while at Sharon’s commemoration Sholoshim program her kids are making for Tuesday Night.

No proofing while on vacation, need to go help set the table for 10 people….