Note this IS forecast to be Tropical Storm .

It likely could also be a Hurricane. 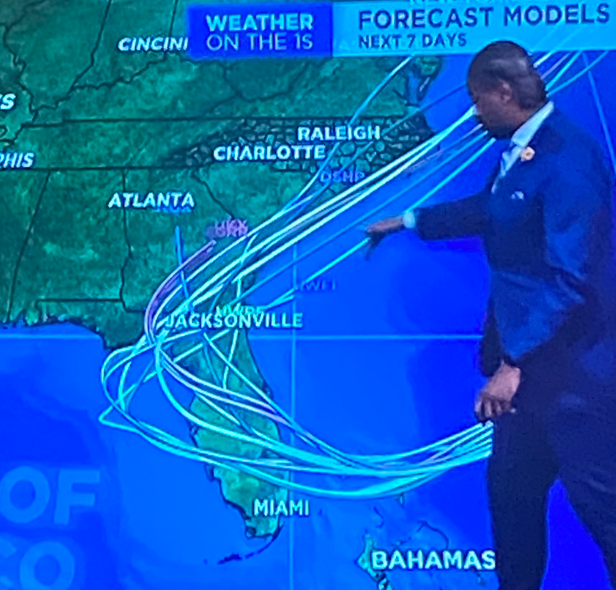 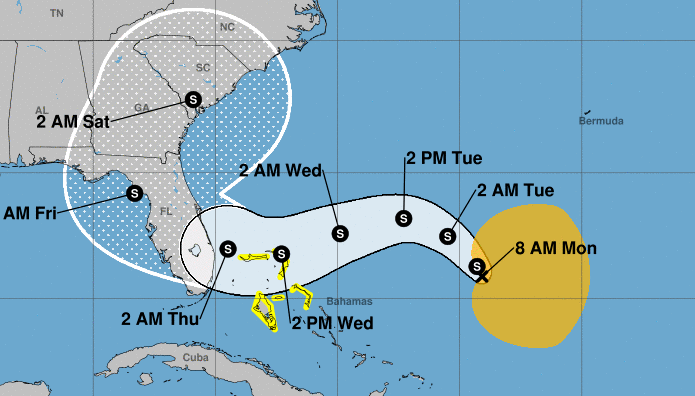 45 MPH going to make a snake like track  across FL.

And, yes it could cross Florida.

Then get pulled back by a front.

This is basically a quick update to let you know that Nicole is on the map and the clock is counting.

At a time such as this you read forecast discussion for Melbourne Florida, as it’s in the track and always one of the best NWS discussions to read anywhere. They lead with the dangers, the concerns and discuss the details. Curently, NWS Miami, hasn’t updated their long term discussion but they will. The secret to this storm is to go to the NWS closest to you and put in “my town NWS forecast discussion” and read it, it’s usually easy enough to read if you’ve been reading my blog and that is basically what your local on air meteorologists uses to tell you what you are going to be seeing from Nicole. Go straight to the source, go to the NWS website as well as the NHC website!

This is as good as it gets today.

Every city in it’s large elephant like trunk has a similar but different forecast. I’m concerned on Charleston and it’s adjacent beach communities North and South of that beautiful city as they were pounded by Ian and are still cleaning up some. Speaking of Ian, yes unless something changes, it could also rain on the West Coast and bring more tropical winds to an area that is still picking through the debris. The “Treasure Coast” of Florida was banged up bad by Ian and you didn’t see much on that on the news, so a direct hit there will be not quite devastating but stonger than you probably think. Note it’s called the TREASURE COAST from treasure that would wash up on it’s beaches from many similar storms to Nicole.

Yes, I’m concerned on Miami to WPB as nothing is really set in stone as I often say. It’s just been named and it has not tightened up much into a real entity but it is packing 45 MPH winds. As for the Carolina coast and parts of VA they will see a nonstop onshore flow from the NE that will deliver a larger impact that you’d think but that’s the nature of the beast. And, I’m talking about when it’s on it’s way to developing, then after it does whatever it does in Florida, it gets pulled BACK up over Georgia, the Carolinas and VA to wallop them again on it’s way up the coast.

An impact late season storm similar to many that have happened over history and indeed have taken down many a schooner, galleon that didn’t get updates on Apps or Cones from the NHC.

Many La Nina Hurricane Seasons have a punctuation point at the end with a nasty surprise. 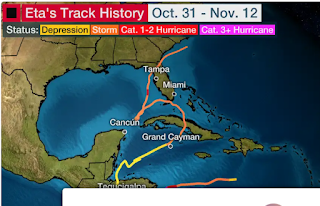 Eta in 2020 did a similar snaking path across Florida. This is not as rare as many would say, but often they were just simply written up as Gale Centers or some other language but the NHC (rightly so) began naming Subtropical Storms that sometimes stay subtropical and often can end up Hurricanes before merging into a front and getting another meteorological name.

The name for this one is Nicole.

Ending here for now with what I put up on Twitter to remind people after Ian hit a beach people thought would see it cruise by on it’s way elsewhere.

Nothing is set in stone!

It’s your job to watch for any changes.

This was an introduction to Nicole.

Be back later this morning.

I’ll add a song in then and…