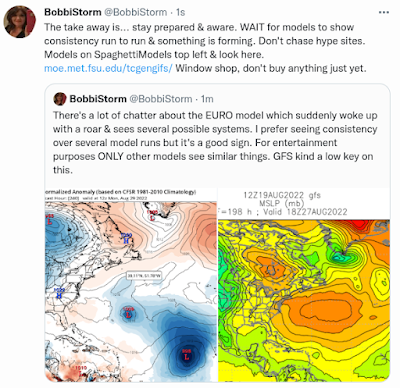 This post talks on possibilities down the Tropical Road. It also talks a bit on Four that is forecast by the NHC to be Tropical Storm Danielle in the BOC.  Note the model on the left is the EURO, the much loved Euro that suddenly seems to have woken up and seen Lows everywhere. The GFS on the right is the model that usually sees Lows the way some people burp loudly after a big meal! The GFS barely sees anything.  Time will tell. Personally I wait to see commonalities on consecutive model runs before I start running around the house screaming “It’S GOING TO BE A HURRICANE!!” because what the EURO shows on Friday can be vastly different from what it shows on Sunday. They don’t PREDICT they show possibilities valid until the next model run.

Lots of sites on YouTube are already screaming 3 HURRICANES FORMING with scary headlines of destruction in 10 days. Don’t buy what they are selling, don’t click on the click bait. Do your own research on spaghettimodels.com and www.tropicaltidbits.com and listen to those who have never steered you wrong and do discussion showing all the possibilities. It’s also possible these are errant runs showing systems that aren’t on future runs and go poof after 2 or 3 runs.

It’s almost late August and as we move towards Prime Time in the Tropics it’s believable that the tropics will come alive soon in some sort of fashion. It’s getting to be that time of “now or never” regarding a busy hurricane season this year. 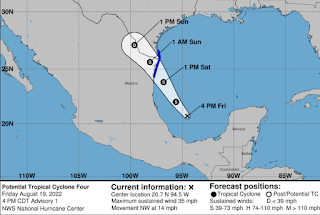 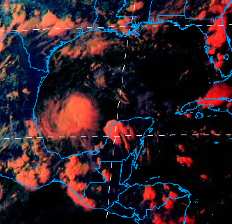 As for what should be Danielle by Sunday, it’s worth noting the models weren’t filled with graphics showing a Tropical Storm forming in the BOC on back to back runs. Why? Many have asked that question so my answer is that Invest 99L now known as FOUR a Potential Tropical Cyclone is a small storm and while it has had a small signature its very small on Earthnull. It has flared up, fallen apart and flared up again but consistent enough to believe it would form into something. It was a tropical wave that didn’t form yet traveled across the Atlantic, into the Caribbean before slowly pulling together near Central America.  It has a weak pulse, a small “center” that hasn’t totally formed yet a large pocket of convection. Maybe the models are right and it’s just a large ball of RAIN or maybe it’s just too small a system, close to land for them to see. Models have a hard time picking out very small cyclones especially when they are close to land, and that would be Invest 99 aka FOUR.

Even close up it’s hard to see FOUR 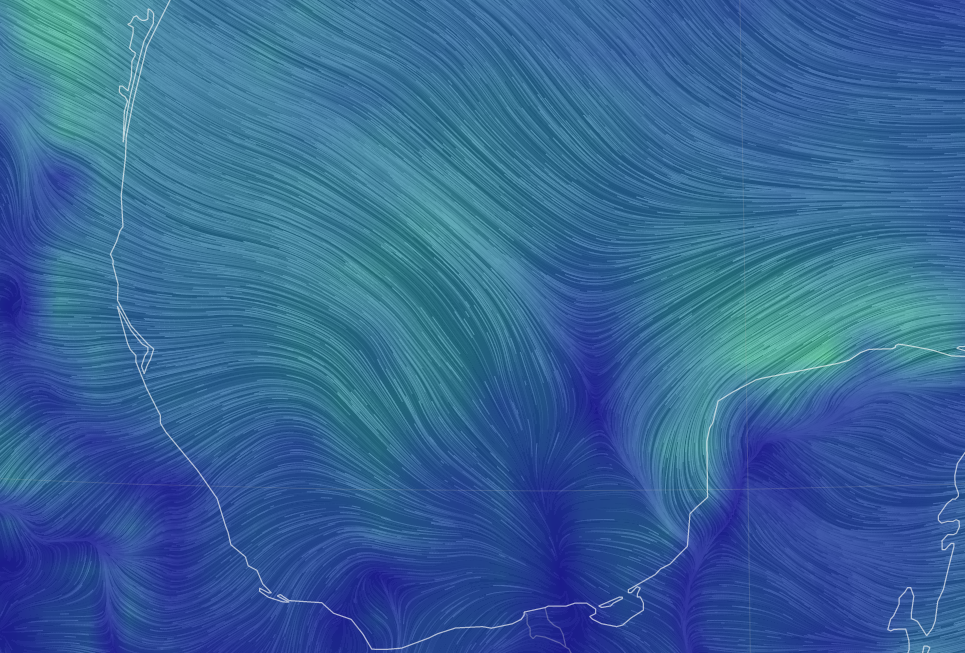 The water is warm, the shear is low.

It already has winds of 40 MPH.

BUT it lacks a closed center.

It needs both convection and a closed center.

Can it produce a named system? 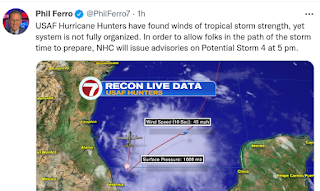 The world is waiting for Danielle 🙂

As always Mike is on YouTube off and on during the day as updates dictate so follow him there. He was on earlier today talking on the dream team of 3 Lows that the EURO has coughed up. If you enjoy YouTube videos…. he’s there as are others who are reliable. 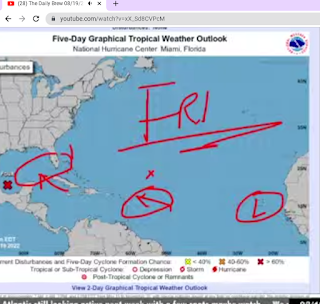 Friday afternoon’s update is shown below. Follow him to get updates in real time. I just wanted to take the time to write, real words and discuss what is or isn’t going on or rather what might or might not be going on. I’ll be offline on Saturday until the evening and I’m sure if the models continue to show possible Lows the Internet will be rife with inneundo. Choose who you listen to carefully and as always pay attention to the National Hurricane Center, they are the bottom line!

Ps… read the previous blog for data on 99L aka FOUR