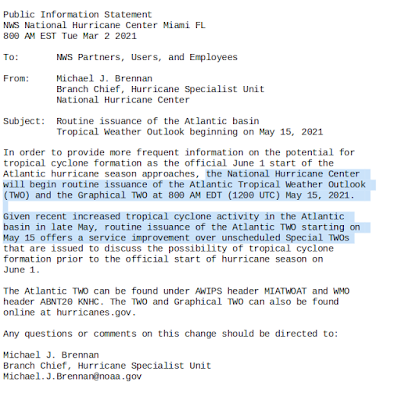 So let’s talk tropics or more so….

…let’s talk about the NHC.

They have basically decided to start issuing the product most of us call the TWO meaning the Tropical Weather Outlook as of May 15th, two weeks before the official June 1st start of the Hurricane Season. Often, over time, there is something to talk about during that period and when the NHC feels it needs to it has to put out a Special Tropical Weather Outlook as we have seen often the last few years. They also want to move up the official start of the season to May 15th but that’s an ongoing discussion point in weather circles.  Some, like Rob from www.crownweather.com asked in his recent email to his subscribers if we really need a specific date at all for the start of the season. I mean in reality if there is something there they will go live and give information. A date is a line in the sand, yet time really isn’t always linear but more chaotic as we have had tropical systems in almost every month of the year including December way past the end of the Hurricane Season.

On another level, the use of the “Official Start of the Hurricane Season” allows networks and agencies to properly publicize the Hurricane Season and amp up discussion on Hurricane Prep. On another level nothing amps up concern than seeing a Hurricane forming in late May somewhere or even a Tropical Storm pop up off the coast of Florida from the tail end of an old cold front. It happens and often until someone is in the cross hairs or until there is a Hurricane Warning many refuse to take it seriously, and then again others take it seriously every month of the year. When they go to Publix and see Tuna on a “buy one get one free” sale they throw one tuna into a bucket labeled “Hurricane Supplies” and the truth is you cannot really change human nature. You can try but people tend do stick to their own inner clock that can only be changed by possibly going through a big hurricane such as Andrew or Katrina in which case you either move to Colorado and get out of Dodge or you begin preparing on January 1st for the hurricane season.

Works for me because there is always something watch in May. If this was May or even late April they may have officially designated the area off the SE coast currently as something there to watch but not expected to develop in a tropical way etc, etc, etc.

Quite the coastal low.

Speaking of that are off the SE coast, “wow, doesn’t it look well developed on Earthnull!”  People like Dabuh and I are always watching and it’s fun to joke around and banter in March, because there is no pressure of a Category 4 headed towards a populated town about to turn their lives around. Patterns develop, set up…rearrange and then as we get closer to hurricane season the pattern shows it’s face in a more visceral, threatening way. Today it’s high surf in some places, strong wind at the beaches and just another day in Raleigh watching as the pollen build up on the pine trees and wondering when they will pop open with maize colored pollen coating out cars like butter on popcorn. There’s a “season” but we all know some years it pops in March when it’s been unseasonably warm or late in April if it’s been cooler…. the same with the tropics, they don’t pay attention to dates on a calendar. 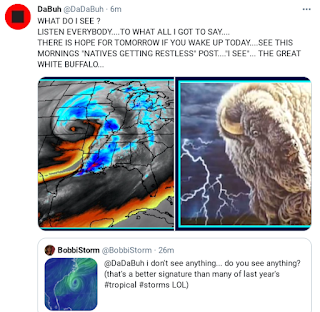 Be it June or January.

DaBuh and I will be ourselves. 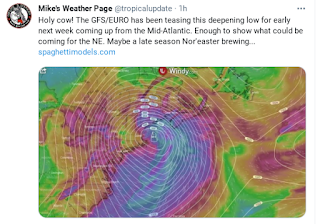 …and even tho Mike…

is known as “Spaghetti Models” all tropical…

He’s a man for all seasons…

He’s a true blessing too!

And the NHC will start their TWO on May 15th.

Stay tuned for more info on the 2021 Hurricane Season.

Tomorrow we will talk on names.

Why the NHC dropped the Greek Alphabet…

Ps… prayers for all those in Boulder.

Prayers for all of us…

You can move to anywhere for a good life…

…but bad things happen besides hurricanes and earthquakes.