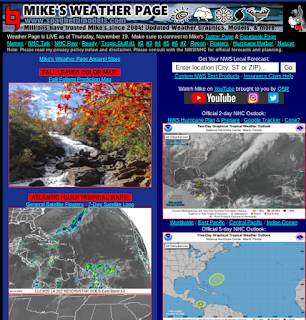 This is late November on Spaghetti Models. There’s a picture of Fall (Mike so loves the seasons) and a front is draped across the Atlantic and as in the beginning there is a yellow circle off of the coast of Florida but it’s not going there in November. Oh and an area in the Caribbean that is already washing ashore as I type this but it did look quite put together last night on satellite imagery below. My phone is dreaming of snow and Seattle lately as it changes words often to what it thinks I mean. The wonder of a smart phone is awesome but it’s frustrating beyond words as it’s always trying to correct the color in the sky and fix your words to what it thinks you are really thinking on. Life in the fast lane. 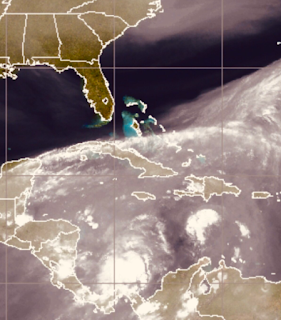 Look at that delineation … crazy.

Dry air to the North.
Moist to the South.

Yellow circle, too little …too late. 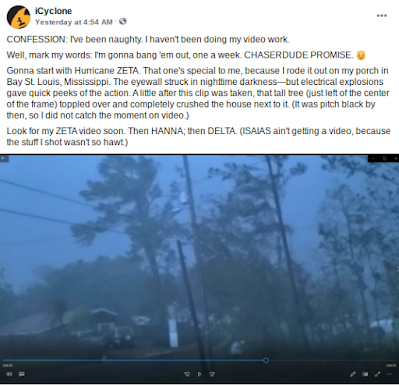 Waiting on his video to be finished…

…he’s a good writer also aside from everything else.

Doesn’t this picture look wintry to you?

Or is it just what I want to see.

….definitely chilling off those tropical waters. 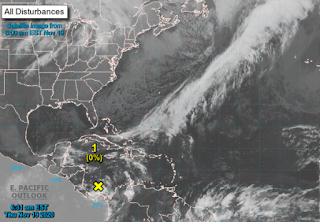 2020 sure has been life in the fast lane and this week I’ve felt badly that it’s been hard to actually blog, write or think and I’ve been lazy in good ways. Sometimes you need to be “lazy” or more so work on other things that seem not to be priorities but are and then at some point you gotta snap out of it and get back to work. So when I went on Facebook briefly and read @iCyclone’s post I smiled and thought well it’s he’s slacking off for a few days I definitely can. I lived in California quite a while in the 80s and I loved it but I did missed “the South” which is something you don’t understand unless you have actually lived here versus passing through or watching some movie playfully making fun of it. When we’d drive back to Florida on I-10 or I-20 and I’d get out of the car to run into the gas station the “air” the “summer night air” would wash over me welcoming me home. I fell in love with some sky scene in Jackson Mississippi one night when I looked up at the stars, felt the feel of the South embrace me and looked up into the sky and saw a meteor flash across the sky or as we like to call them a shooting star and I smiled and exhaled and I knew I was home. And, yet California was home too and I loved it but it wasn’t “HOME” in the same way. Another pit stop in New Iberia made me totally fall in love with that part of Louisiana, as much as I love New Orleans for other reasons.

We all seem to have Pandemic Fatigue this time of year and I’ve noticed everyone’s response is to decorate for the holidays and long for a new year.  “Feel the love of the season” as the song goes and may we have hope and joy again even if it’s on a smaller scale that doesn’t feel right but make a Wish List for what you want to do when this is all over. Also make a list of what you can do now. But, while here … enjoy it, somehow and yes I’m gonna put up my Chanukah LED lights I bought last year in a Target in Florida with my kids last year this time. And, I then I found some in a Target in North Carolina and bought more so that’s what I’m going do. Apparently I’m not going to Miami for Thanksgiving and that’s upsetting because there is a small family birthday party for my 3 year old grandson that I’ll watch on Zoom and I’m gonna cook Thanksgiving dishes for the next week and maybe eat something else on Thanksgiving because I may be tired of pumpkin pie by then. Who knows?

Embrace “who knows” and “enjoy the little things” and in truth we don’t know 2021 will be any better but we sure hope so. As for the Hurricane Season it’s slowly slipping away and yet still we are watching yellow circles that could come near Bermuda. It’s there. We watch and I’ll update the blog if anything happens. But at this point that anything that really has my heart racing is the hope, the dream of snow falling. Okay I do love the Seasons too. And, I love meteorology and geology and yeah I’m an Earth Science girl with a lot of geography thrown in there too! 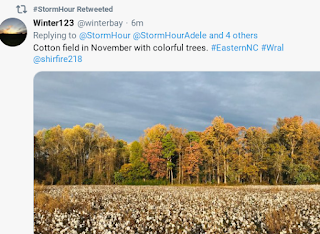 Leaving you with this beautiful picture that I found on Twitter. It really does look like that. Often I’m traveling in November and on a ride back from New York we pulled into a truck stop on the Virginia North Carolina border (because we’re friends ya know and we share a border) and a field looked as if it was covered in snow at sunset. Somewhere I have a picture of it lost in some old phone that would need to be charged to find because it was a long time ago but it’s still in my mind’s eye perfectly; the setting sun illuminated the cotton and I knew it was cotton but it looked like snow but it was only in the 50s and there was no way it was snow but the eye sees what the heart wants.

So dream of a New Year.

Dream of a better year.

As for the holidays this year…

…they will be a bit different.

I’ll be fine and dandy…

Ps… enjoy this song from the 80s and life in California…

I listened to a lot of Dolly Parton then..

..watched a lot of movies at theaters on Hollywood Blvd.

And listened to a lot of Country Music…