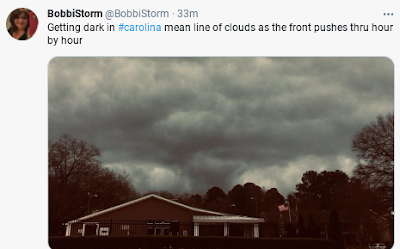 A little while ago in Raleigh.

Looked worse that it was…

Then the cold front slides through..

When there’s nothing to talk about in the weather….weather people talk about records and statistics.

You know when on air weather people tell you the weather history for the day and let you know it could be as cold as 12 degrees or as warm as 82 you know you live in North Carolina. Yes, I’m that person who loves to hear the record history date for cold and hot, because data is interesting. This has been a very wet year so far in the Raleigh area and Mother Nature politically incorrectly flirted with giving us the record rainfall but rather left us standing at the altar in the top five wettest years that this area has had since records started being kept officially. Spoiler alert, for more of the time on Planet Earth we were not keeping records so records only count from when you started tracking them. Today is March 1st, what is known as meteorological Spring for those impatient people who refuse to wait for the Spring Solstice. 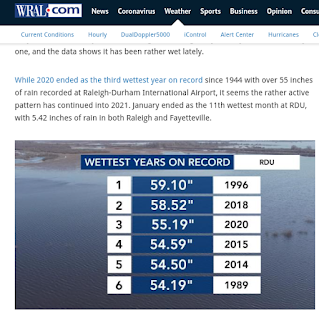 What difference does a day make?

A lot when it comes to records.

It poured this morning, a long, heavy soaking rain yet it came about 7 hours after the deadline for February to break a record for the 2nd most rainiest February. This is the problem with records, they don’t tell the real story. As meteorologists we love to study and note records, compare and contrast this month in 2021 with 2020. But the most rainfall or highest snow totals are only counted by calendar months so had  .02 inches of rain fell just before midnight at the airport it would have set a record, but because it poured 7 hours later it no longer counts for February but starts March off early with a bang. The records are officially counted at RDU, the airport you may have flown through once or twice, and if it rained down the block and around the corner it’s not part of the record but your yard did get wet. It poured heavy for about ten minutes yesterday where I live but alas RDU was dry.

Records can be used to substantiate predictions, forecasts and amuse the otherwise bored weather person.  I did a study a while back with help from someone who keeps the records in Asheville and in years where it rained often for months going into the hurricane season this area was impacted by a hurricane. Is that a coincidence or just seeing what you want to see? Often this pattern sets us up for a  hurricane to cruise past OBX (the Outher Banks) and catch a front going out to sea. But it all depends on the particular time of season. What may sweep a system out to sea earlier in the hurricane season may catch a system when another factor sets in and a hurricane moves North up towards the front fast which is usually how inland North Carolina gets an inland impact beyond flooding Down East in the river basins. You know those years where Hazel and Fran did not stop at the border nor did they curve out to sea sparing us all landfall. Every year is different, long time readers of this blog will remember I always say every hurricane season is different like Cabbage Patch Dolls were different; yes they definitely all came from the same gene pool but they were each unique in some way.

I’m sure you’ve heard that saying “when it rains it pours” and it’s true often because it’s a pattern. Droughts can be busted by a hurricane, however often they high pressure ridge that sets up protects the coast from a hurricane. Again certain times of year, up here in these parts, an approaching early cold front will help re-curve a storm away… but there are always periods between early fronts. In South Florida an early front can grab a hurricane approaching from the ESE and pull it away, later in October an approaching front can catch a Caribbean hurricane and drag it across Florida from the SW and often storms that make landfall in the Florida Panhandle, shower the Carolinas with heavy rain and strong winds as they make their way across land out to the Atlantic again.

When I first came to NC they were having a very bad drought, so bad that you actually had to beg a waiter to bring you a glass of water before your meal but only after he reminded you “we are having a very horrible drought” to serve you some guilt with your glass of cold water. A few years later the pattern changed and water flowed freely again at restaurants and our lawns were green and verdant and if anything growing a tad too fast and Florence made landfall and stayed too long in North Carolina after what had already been a very wet year. On air mets spoke on it, newspapers wrote about it and the rain kept coming.  Too many factors for any one to overwhelm the others as everything having to do with hurricanes is complex but it does make me wonder what sort of hurricane season 2021 will be and if it will be kind to the Carolinas or hit us when we are already water logged and watching our water levels rise in the rivers that feed the flood plains that make us a very fertile place to grow agriculture but as always too much of a good thing is never good.

Speaking of dates to start off the season, when does Hurricane Season begin? I do believe this year it’s already in the books for June 1st, but there is a lot of chatter in official circles on starting the season early around May 15th in the future. Why not just go for May 1st? It’s always been common to have early storms sneak in early in May before the official start but we have tulips that push up through the ground before the Spring Solstice and we have tropical storms happen often in May before the Hurricane Season officially begins. I like winter here and I don’t look forward to a hot, heavy summer so the longer it stays cool the happier I am and as always some model somewhere, usually the GFS, throws a model with snowflakes flirting with Raleigh in March and I roll my eyes and think “I’ll believe that when I see it!” 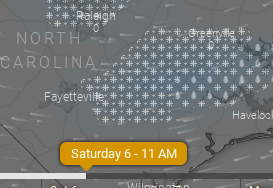 Yeah, right… note Raleigh is on the edge.

Later on this week more weather races through… 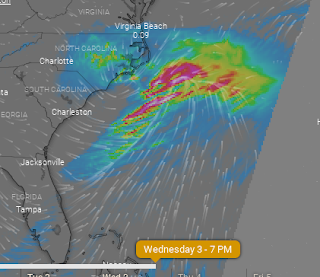 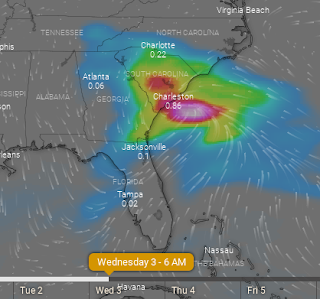 And models do spin up Carolina lows.

If this was April not March… I’d wonder.

For now I’m watching the pattern…

You can’t stop the progression of the seasons.

They come early or late or sometimes on time.

But they do come… we are almost there!

But oh what a time it was …