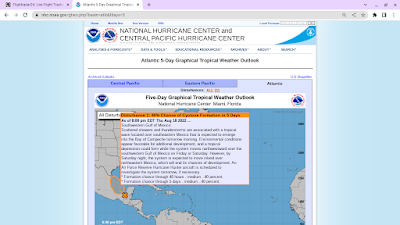 I waited to blog until this evening and I could get a good sense of what this Invest is and has going for it, or against it and models weighed in as I did some other things that were important to me. I took a kind of “personal day” off and that was refreshing! 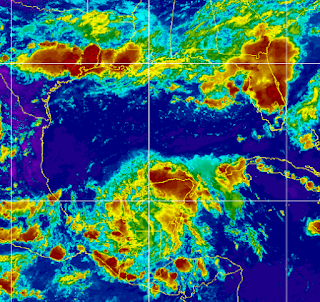 Our new Invest is center stage down on the Yucatan, with much of it’s moisture still over water it is able to main it’s convection while being over the flat land of the Yucatan. This is a dance as old as time for these systems that take this typical trek from the Caribbean into the Bay of Campeche. Often they get pushed into the TexMex region, other times depending on timing of development and the exact location of the center that develops they take aim further up in the Gulf of Mexico. At 40% over the next two to five days, we can’t take anything forgranted or any model to be carved in stone. 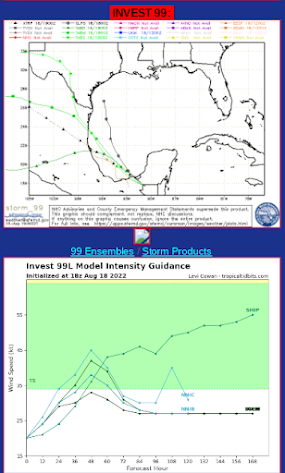 Models show a fast spark and then…..

…some show it loses intensity.

There’s alwas that one Gung Ho model too!

Does 99L follow 98L as if they are all preprogrammed. Being silly, trying to be silly and not get too intensely serious with this yet. The models have been less than stellar over the last several weeks seeing storms that never formed and tropical waves that never developed as they did in the models. I’ve seen many online posting models of doom and destruction in the 10 day time frame and yet the models missed the inability for that particular wave to develop even into a small closed low in the Atlantic. Why they keep missing it is a good question, though until the switch is flipped and the tropics come alive it’s common for models to be consistently wrong.  When I see a model I believe or a wave worth watching I will be the first here to scream “Tropical Wave, Tropical Wave!” but I don’t see it yet.

I do see nice waves. Waves that may not develop, that don’t become Fish Storms because they made it further West without a name and ended up close in an Invest as did 97L 98L and 99L. You see a pattern here? Camille was such a wave that didn’t develop until it was deep in the Caribbean. Andrew didn’t become a strong hurricane out in the Atlantic or it would have been a Fish Storm or a Carolina problem.

And, fronts are still on the map and have never stopped being on the map all season. It’s a strange season I will give it that, but we will be able to discect it in the rear view mirror come December when storms are written up and the NHC does their final reports.

Somewhere some model is always running… 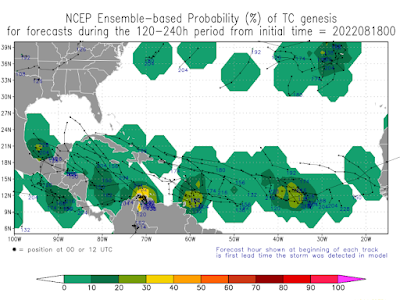 A model offers a suggestion.

It’s not a forecast.

So while watching the fronts and waves.

Wait for the NHC to weigh in for clarity.

The Search for Danielle goes on and on…