93L is still there out in the Atlantic.

A weak, but persistent westbound wave.

But where could it go? 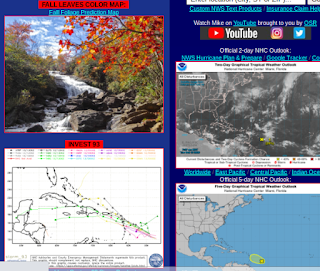 That’s what he does… he brings us models…

…along with an array of satellite imagery.

Other models go sharply West into the Carib.

This is really about as typical as it gets for October in the tropics. It’s not all over until November 30th, even though the old poem says “October all over” but in truth we are beginning to wind down and our expectations are lowered. Yet, we need to remember that the potential for tropical development portends a possible strong cyclone later in time that like Wilma or Sandy could shake up our world. A typical route for systems in the Caribbean is to catch a ride to the NE moving along a frontal boundary and often Florida, Cuba and the Bahamas are in the way. Other times we have Sandy and Matthew sort of scenarios where they fester down in the deep, still warm Caribbean building into a strong hurricane and then as they naturally try to move to the North towards the poles crossing Cuba or the Windward Passage threatening the islands and the East Coast. Many people forget that Sandy tormented Cuba, before moving toward scaring Florida and then finally taking aim on the East Coast and New York City. The current set up this year is very similar to both of those years so it’s worth remembering what happened with Wilma as well as later in October with Sandy.

It’s also worth remembering we already had a similar storm ealier in the year Isaias that hooked up with an early August, strong cold front and traveled across the East Coast giving us a strong punch in the Carolinas as well as all the way up into New York City and New England.  We are definitely dealing with fronts so IF something forms down below, it has the potential to create similar trouble and we can hope it just sharply crosses Cuba and slides out through the Bahamas missing the East Coast but it’s trouble for someone and it’s possible we could have a similar sort of set up as Isaias and Sandy so keep that in mind please while enjoying Pumpkin Spice Latte and Fall Foilage if you are lucky enough to have it and if not Mike has some nice images up there at the top of his site with advice on where to go to find it. 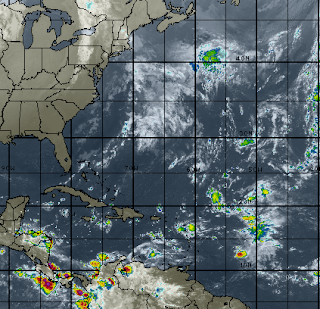 I’m using this image above to show you both Invest 93L and the fronts that are draped across the East Coast as well as the Atlantic. You can see one runnng from Virginia north into Pennsylvania and New York. Another one lays domant across the Bahamas up to the area of Bermuda. If you look carefully at the far NW part of the image you will see the next front on it’s way down towards the East Coast. It’s all about the fronts and IF something forms from this or another system they will go where the set up allows them to go based more on frontal boundaries than high pressure in the Atlantic, though high pressure anywhere always gets a vote.

More  thoughts are in the video below.

A look at Earthnull below. 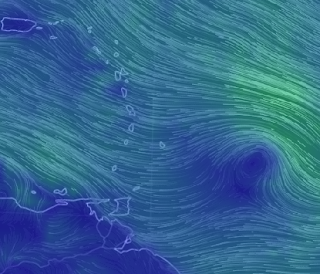 Surprisingly despite shear it has a strong signature.

It’s an Invest, an area worthy of investigation.

It’s feisty, I’ll give it that.

Visible image below shows that.

There’s a circulation down there.

Shear helps us see it. 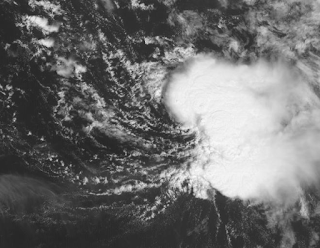 An Invest that doesn’t fall apart from shear.

A system that hangs in there.

Speaking of Fall…. I took a walk this morning.

We had heavy fog in Raleigh.

….staring out in awe through the window.

It was much heavier than these pictures show.

At 8 AM I couldn’t see the homes behind me.

It was a wall of white clouds hovering low.

At 9 AM I took a walk and these pictures. 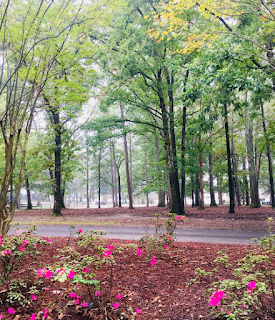 Yellow leaves appearing on a tree nearby. 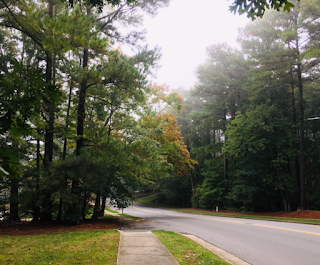 The fog hovers above the greenery of Raleigh.

Yet Fall is creeping in leaf by leaf.

Time is moving, the seasons are changing.

We are watching the Caribbean, not Africa anymore. 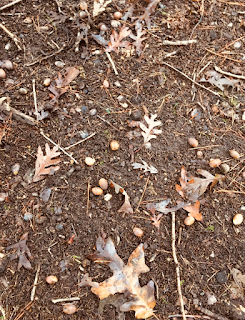 The leaves below my feet….

Acorns on the ground.

God it was so beautiful this morning.

Fog does that in odd ways…

it hides details and yet it’s glorious also. 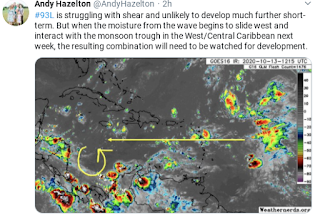 That basic set up remains a scenario.

We could also have storms form from old fronts.

Remember that it’s not all about the Caribbean.

Off the East Coast often storms form close in.

Honestly I’d probably give Invest 93L a 35% chance of forming currently, but it’s not my job to assign it a number or a color and if it was I’d use purple and gold and green for colors. Keep watching it and while looking up at the Fall colors of the leaves in New York, New England and even Virginia remember not to forget that it’s still Hurricane Season. Remember Matthew, Sandy, Wilma and whle you are at it remember Hurricane Grace and the Perfect Storm as they are all possible analog storms for late October and early November this year.

We aren’t over with the Hurricane Season.

As of 4:00 PM, Epsilon Remains Stationary Over the Central Atlantic Ocean : The Alabama Weather Blog

As of 4:00 PM, Epsilon Remains Stationary Over the Central Atlantic Ocean : The Alabama Weather Blog