To be honest ETA peaked.

But will see what they say at 11 AM

Because basically it already has land interaction.

Basically it’s like been wearing a mask too long.

You know how you feel after being out for 2 hours?

Still pretty to look at…. 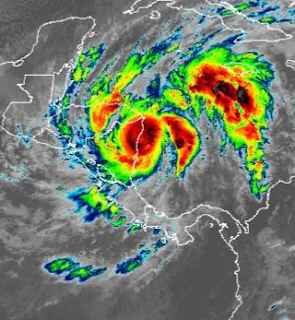 That NE band bugs me.

But we can talk on that tomorrow. 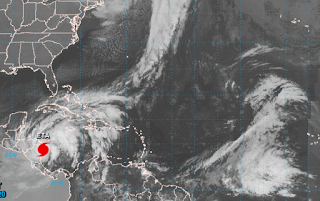 So let’s talk tropics and when I say tropics I mean the tropical basin. There’s a strong hurricane making landfall slowly and that’s basically a train wreck in slow motion. You have a huge wave/convection complex out in the Atlantic that the NHC is totally ignoring and it’s only grown in size and girth over the last 24 hours. It’s not about it being a long shot to be the next Major Hurricane of 2020 it’s about it having tropical possibilities in a year when so many no tropical entities were upgraded despite much discussion online by meteorologists and yet “let’s totally ignore the huge convective complex” and not so much as throw it a 10% yellow bone? Seems odd. Next we have a huge front that moved through Florida on warp speed and immediately crashed it’s time machine and is hanging out there gazing longingly at ETA with tons of convection across Cuba and the Bahamas.

Both the dangling dead front and the huge westbound wave are candidates for something to possibly develop aside from all the attention on what do the remnants of Eta do in 7 days. Seems like we are losing the forest for the trees.  And if that NE flank of thunderstorms from ETA stays out over the water while the remnant core rains itself almost out over Central America than we could be dealing with something in the Caribbean again sooner vs later and which “eta” it is I’m not sure because the Greek Alphabet here is doing me in and I have that song stuck in my head that I can’t remember the name of but it’s not important because they all end with “eta” it seems. I love Greek food, I love my brother in Greece but it’s becoming a tongue twister season suddenly.

And can we get to Kappa?

In truth I’m praying today for the people in the path of this very destructive hurricane and please remember that all the people that died in Hurricane Mitch did so when it was crawling around Central America as a slow moving, stalled out Tropical Storm. I don’t think this will stall, I hope not and I’m concerned part of it is still being fed and anchored by that wicked far right band. And, I’m praying for America today because it’s really not about who wins which election it’s about the people of America as we are it’s heart and soul and we should come together and hope all the rumors of various types of violence and even some swear celebrating will turn to riots. I suppose it depends on if you are an optimist or a pessimist and I’m truly somewhere in between depending on my mood.

I voted. I carefully watched a few debates for local candidates because I’m one of those Independents who vote for the candidate I feel is best suited to the job… well unless one is an ax murderer or a Flat Earth candidate (sorry if I sound judgmental but I do believe the earth is round) and then I sit back and watch who the rest of the American people vote for but in the end this is about America not your agenda or my agenda and no I do not think the illegal aliens from the Pleiades get a vote but hey I can be wrong obviously. Oh my goodness, hasn’t 2020 been a hoot. So buckle up and settle down and grab your favorite drink and snacks and let’s see what happens today as ETA moves towards landfall and as we wonder if ETA dies out over Central America or does it bounce back like a boomerang and try to find it’s way wiggling out of the Caribbean. Or….does another area become Theta?