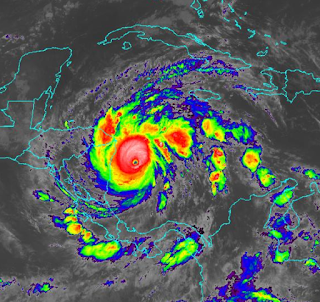 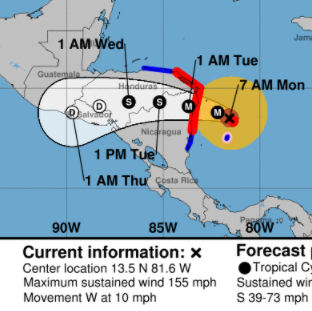 One of many this year.

And should trek across Central America…

..and land in the Pacific as a Hurricane still. 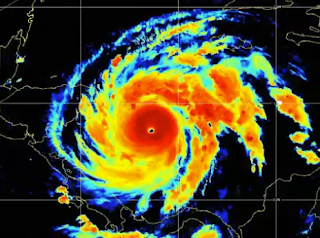 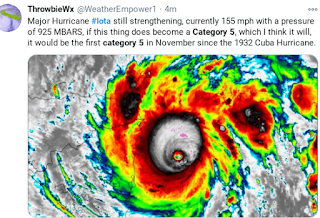 A bit of hurricane history above.

Much more hurricane history below. 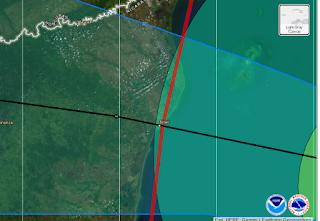 That close up and personal cone threads Bilwi. 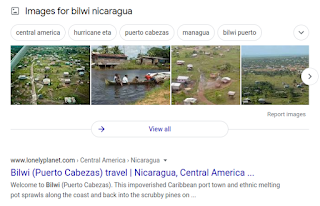 Images you can find on Google tell the story.

Sort of similar to those little coastal towns in Louisiana.

Hurricane history is why the bigger cities are inland.

But Iota will visit them too! 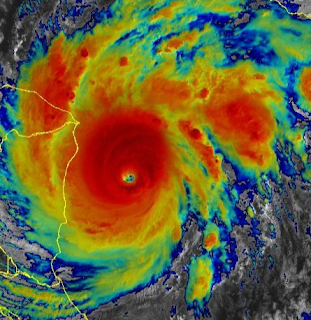 Remember one thing this morning from this blog and that is that while the deadly, destructive winds will destroy anything in it’s immediate path they are a small ring of hell swirling in motion, grinding everything down but a hurricane is a huge mess of convection and rain far from the center will also move inland and create flash floods and deadly scenarios. Category 5 Hurricanes don’t last long over land and the slow movement inland will produce torrential rain way ahead of the arrival of the infamous “eye” so it’s a whole huge package of destruction delivered in this case slowly, as in a slow motion disaster and remember when you hear it’s no longer a Cat 5 or Cat 4 or Cat 3 and “just a Cat 1 hurricane” or a “tropical storm” know it will continue to deliver a deadly punch based on the torrential rain not the headline catching winds.

We know this because we know what the satellite images show us as relates to projected convection and more so we learn from past hurricane history and this region does have a hurricane past to learn from and hopefully people will find some way to stay safe in this horrific, unfolding slow motion tragedy.

The coastline of Central America is littered with the tracks of hurricanes that once made landfall there. Each similar in some way as a strong high pressure would not allow them move move to the North and kept them further South on a track West towards land and often slowly towards land.

While Mitch was not the first strong hurricane to move slowly inward there it wasn’t the last and way before Mitch huge late season hurricanes slammed into small villages and created a pattern of tragedy that seems to come with every storm. I knew a woman in Miami Beach who I worked with who was from Belize and her earliest memory was the destruction of her city when she was a small child, yet she added “we don’t get hit much” but added “when we do they are terrible” and we shared stories on  our childhood hurricane memories.

http://consejo.bz/weather/storms.html I believe the hurricane my friend went through was Hattie but I’m not sure. It’s a beautiful area and it does have a rich hurricane history and it is a beautiful place to visit but not during the hurricane season unless of course you are a storm chaser.

So lets look back at Hurricane Mitch from Wikipedia “Initially, the National Hurricane Center (NHC) and various tropical cyclone forecast models anticipated a turn to the north, threatening the Yucatán peninsula. Instead, Mitch turned to the south, due to a ridge that was not observed while the storm was active.[4] Land interaction imparted weakening,[8] and the hurricane made landfall on Honduras on October 29 with winds of 80 mph (130 km/h).[4]“

Mitch, despite once being one of our strongest hurricanes in that region, was a mirror of it’s strong self when it did make landfall and moved slowly inland as a Tropical Storm and it was as a Tropical Storm that it caused so much death and destruction; even as a tropical depression it caused death and destruction. That said, the immense amount of moisture wrapped up in the storm that had been a major rained itself out slowly on an hilly area with small villages and the terrain could not constrain the convection that poured down hillsides and ravines taking homes, people, their animals carrying them away and claiming a horrific death toll of somewhere around 11,000 people. It’s hard in such places to get an accurate number and even a guess shows how tragic Mitch was as a Tropical Storm.

Recently Eta did the same sort of track, dipping WSW and then bouncing back the way Mitch did but Iota is not forecast to do that odd dance. 178 people officially died from Eta that moved inland over a not so populated area and weakened fast, yet many remain missing and are presumed dead.  Also from Wikipedia: “Eta peaked at 150 mph (240 km/h) and 923 mbar (hPa; 27.26 inHg) as it slowed tremendously off the coast of Nicaragua early on November 3. An eyewall replacement cycle then caused the storm to weaken, but it remained at Category 4 strength as it made landfall south of Puerto Cabezas, Nicaragua, late that same day. Eta rapidly weakened to tropical storm status early on November 4. On November 5, Eta further weakened to a tropical depression as it moved northwestward into Honduras, before turning northeastward back into the Caribbean, on the next day.”

With prayers for all those in it’s path. And let’s hope this is the last of this year’s hurricanes for this region that has had enough of hurricanes in 2020.

For Planet Earth, No Tourism is a Curse and a Blessing