98L may take that trip to Cuba and Florida.

But as good as the models are in agreement now.

It hasn’t formed, it has no center.

Yet, this morning it’s squashed by dry air. 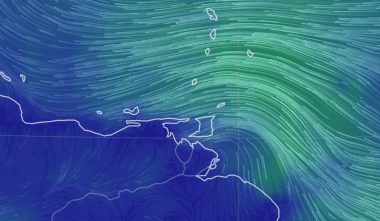 Hiding down by South America..

Trying to get into the Caribbean…

…so it can begin.

…for it to get going.

A mimic look below.

More on this …this afternoon.

Now we have models for 98L

Curious on the Central Atlantic Wave tho…

…but 98L the dark area near Trinidad. 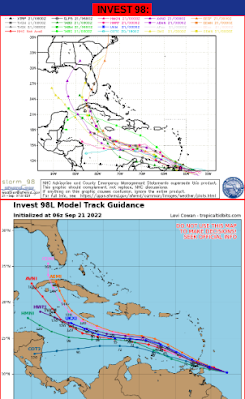 So let’s look at the bottom set of models first. Note how some of them go West towards Central America or aim at the Yucatan vs crossing Jamaica towards Cuba. Easy to focus on those few tracks that track this into the Gulf of Mexico, but until this forms all bets are off on what exactly it will do. Models provide a great guide but at this stage in development it is all about possibilities and perceptions and nothing more.

A reminder for you all to check your hurricane kits, brush off the dust and make a list of what you need and get out there and get it before the grocery stores are a gridlock of panicked shoppers at Publix!

There are plenty of other systoms out there to talk about, but they are not forecast to make landfall or become players in the popular ten day period so I will talk on them later today. Know the tropics are alive as they usually are in September, on the edge of the Autumn Equinox and as long time readers of this blog know back in the day there wasn’t an official “Hurricane Season” but hurricanes were known in old history records as Equinox Storms as they always seemed to appear somewhere around that Equinox and farmers and sailors looked wearily to the skies to see early signs of these fierce storms on the horizon.

Fast forward to 2022 when the NHC puts out a Cone five days ahead and watches areas of possibilities down near South America and a legion of meteorologists work hard to warn farmers, sailors and school teachers of fierce hurricanes that could come their way.  Fierce Fiona is moving towards Bermuda and Canada, the Cone takes it far away from the East Coast that will feel it’s force as waves and swells move towards our shore and nothing more. 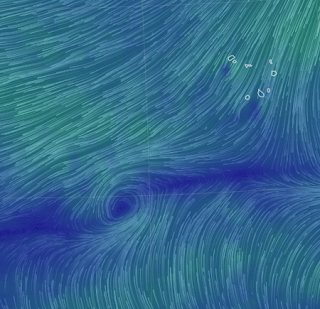 This area that looks fairly closed off…

..far out there is a Yellow Circle with 30% Chances.

There’s more to look at than just 98L all dressed in red. 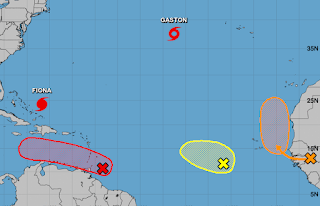 Ps… Fiona is an old fashioned monster crashing into islands in the stream of the atmosphere.

We definitely have something going on later this week in the Caribbean, but which islands will be in the stream of the atmosphere and what does Mother Nature have in store for us? The signs are there but we do not yet have a system with a center, just models offering possible solutions.