A bit about Hurricane Dorian tonight….. 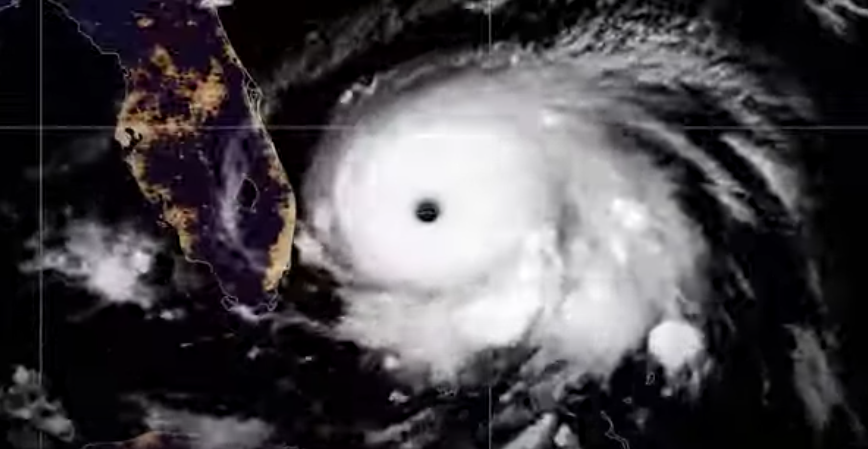 Many a hurricane has played chicken with Miami.

Many a hurricane has turned away.

Late night Saturday night, redundantly so on purpose. Just  here  quietly and watched this amazing video Jim Edds did of Hurricane Dorian. The link is below. Dorian’s big, open, eye that allowed views of the blue sky and the white clouds of the eye wall. Some great video moments, watch the video shown below as it shows you the whole story.  The before documented beautifully, a paradise waiting for Dorian’s landfall, and after when the paradise was laid to waste and everything in between.

Most people are really clueless about what a real, Major Hurricane is like and that worries me. It’s our job to warn people, to educate people and yet probably the only real way to get fully educated is to go through a real Major hurricane. I’m talking the eye or the eye wall not a near miss or getting kissed by a passing shower as the Hurricane curves away from a direct hit leaving you a bit in awe and wonder and sometimes a bit disappointed rather than relieved. Happens, especially with kids growing up in places such as Miami. Too many years of that happening allows a complacency to settle in and yes I’m talking about South Florida. Even those who think they went through Hurricane Irma and lost a mango tree or had a blue tarp on their roof afterwards really didn’t go through the brunt of Hurricane Irma, as once again Miami was spared the direct impact of a real hurricane. 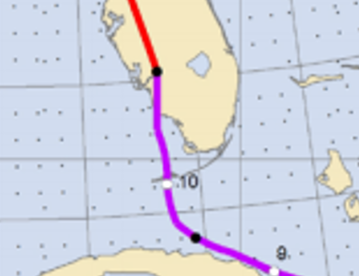 Jim does a good job. I remember speaking to him before a bit, knew he’d be okay as he’s careful but few Cat 5 Hurricanes just stop in their tracks over land, grinding the ground, the buildings, the sailboats and the lives of those who live there into smithereens. Dorian was that hurricane.

The AFTER images remind me of Andrew at it’s worst. The reality of speedy Andrew that raced across the landscape and was actually kind in it’s speed and need to get away fast. Had Hurricane Andrew taken a pause and spent two days over Homestead, the death toll and destructive cost would have been unimagiable. People don’t understand when I say we got luck with Andrew as it took a path across the least populated parts of a huge metropolitan area rather than headed due West down Flagler Street. And, again it moved fast and steady until it left all of us behind in it’s wake. 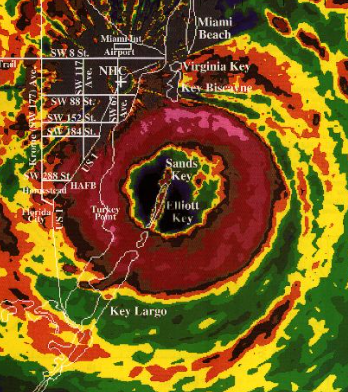 No nice satellite imagery of the 1926 Cane.

Track below shows you the direct hit by a Cat 4. 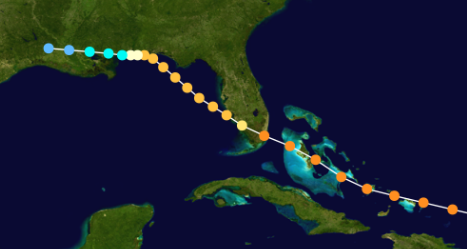 The Great Miami Hurricane of 1926 was a wetter storm, a slower storm and it had a large eye that allowed the many newcomers to Florida to be lulled into the eye to go out and check on friends, relatives and the store downtown and many got swept away when the back side of the eye descended upon Miami. It was a Category 4 and really the closest Miami proper has had to having a direct hit by a Cat 5 Hurricane, a strong 4 that tore at Miami Beach first and then Miami itself ripping apart buildings under construction and tearing roof tops off of homes and somehow, many peopel survived to tell young kids like me about it as I was growing up. My Uncle telling me in detail of how he spent the 1926 Hurricane in a Funeral Home that was built on a bit of a hill, everyone trying to stay safe and many who left during the eye when old timers begged them not to go and some were never seen again; bodies found in the Miami River as the back side of the storm swept them away.

Luckily today people know more about how a hurricane works, but reading it in a book or watching a movie doesn’t really prepare you for what it’s like to go through such a Category 4 Hurricane. And, Miami then like Miami now was filled with newcomers to the tropics in 1926 who had very little experience with hurricanes. Old timers, such as my family members who lived in Florida since the 1880s knew what a real hurricane could do be it to Miami or Tampa or Key West. Do you really know? 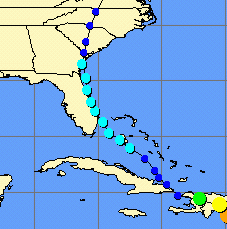 In 1992 no one in Miami thought that Andrew was really going to hit vs turning away like Hurricane David did in 1979. From Hurricane Betsy in 1965 to Hurricane Andrew in 1992 Miami had a lite history of dealing with hurricanes. A few weak ones came by, turned away or fell apart on landfall such as Hurricane Floyd in 1987 and that really wasn’t much to write a blog about. Height of the storm we drove my young son to a friend who was a doctor and worked out of an office in her house to stitch up my 2 year son from getting hurt by jumpin gup and down on an opened up sofa bed at grandma’s house. We would have done better at home with that one really, though the memory of the street lights swaying in the wind on Alton Road made for an interesting story.

Now we are back to where we were in 1992. Every threatening hurricane seems as if it’s programmed to veer away from a direct him to Miami and that would be fine with me as I love Miami and have kids there but I know that at some point, like Andrew… the hurricane just keeps on coming as a hugh high has built in and refuses to let it escape. Eventually Miamians realized Andrew was not blinking, and yet most of Miami got lucky because it wobbled at the last moment some to the S of it’s apparent course and after clipping the Southern part of Key Biscayne it scraped it’s way into South Dade. 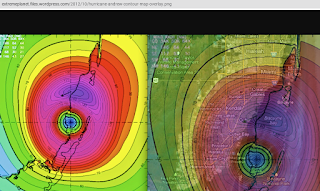 Link below, good blog to read.

I met a man in Raleigh a few years back. He told me he had lived in Florida and didn’t want any more hurricanes. I thought “and he came to Raleigh?” because really Raleigh has had a few direct hits and I’d probably feel safer in Miami with palm trees than bend vs pine trees that snap and slam into your home here where building standards are not as strong as they are in Miami. Trust me on this. After talking a bit I asked where he lived during Hurricane Andrew. His response was “Palm Beach” where I just stared at him politely and said “oh you didn’t have it bad there as much as Homestead” his response being he had it bad enough and left town immediately.  West Palm Beach did not really get Hurricane Andrew. Nope, a passing shower in a distant band yeah but not really.

So when I go on and on about getting ready for the aftermath of a hurricane know I worry a lot about all the newbies in Miami who haven’t gone through a real hurricane, who don’t remember stories from their grandparents of the big one in 1926 and are basically clueless how long it takes to put a city back together. And, that goes for Tampa as well as they always think they will get lucky and the big one will get away like some fish that eludes them year after year.

It’s a good primer for newbies to know what Dorian really looked ike.

The year that Andrew hit Miami there was a display at Planet Ocean about what it was like to be in a hurricane. We took the kids, I may have stayed in the exhibit a long time…  You walked through what looked like a typical Miami house with a Florida Room with lots of jalousie windows and the rain got heavy, the wind got loud and you heard things blowing around in the wind scraping the house (in theory) and then you exited the little Hurricane Adventure. The exhibit was closed after Hurricane Andrew made landfall.

Long blog, just writing for a change as there are no hurricanes out there in the Atlatnic today. No tropical waves that are forecast to turn into a hurricane. Some thought on close in action down the road similar to Colin but nothing on the tropical horizon.

Enjoy the quiet time. Use it properly. Buy food for hunkering down and for “after the storm” when you have no electric, hopefully a roof and you will need things to keep the mosquitoes away and lathering sunscreen on the kids who will want to run around in the driveway or make BBQs in the circular drive as the house gets really hot with no AC or electric after a hurricane. My kids remember Hurricane Katrina, Wilma and Rita that crisscrossed Miami and left us without power three times in one year; 3 times without power for close to 10 days each time. The younger ones may not remember as well.

I sure hope Miami gets lucky again this year!

Excellent video. Watch it and take it in and hope never to see such a hurricane up close and personal.

Jim Edds is a sweet man who does a good job chasing hurricanes.

https://www.youtube.com/watch?v=-m3zO9aGiG0&t=1s An image from the video below, it truly is  mesmerizing to be in the eye of a hurricane. Trust me. But make sure you have enough time to get back safely in the house before the back side of the eye slaps you from the other direction knocking loose everything that was loosened from the first side of the hurricane. Don’t say I didn’t warn ya… 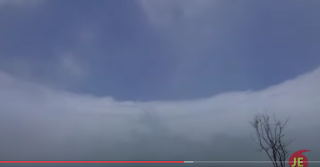 Compare and contrast… with 1987 Floyd ….  don’t judge a hurricane by the ones that fall apart or the ones that spare you and curve away. Judge a possible hurricane by Andrew or Dorian or the 1926 Miami Huirricane or the Tampa 1921 Hurricane that blew all the leaves off the trees in Tampa.

…doesn’t look that scary does it?