Note the  changes from 7 AM.

Again that is FORECAST motion. 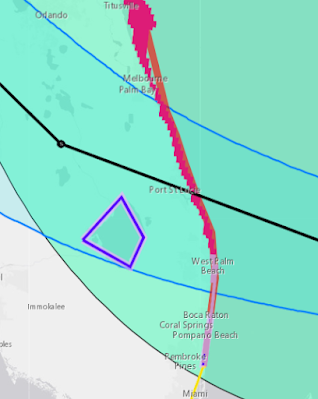 Good product as you can zoom in on cities.

Why don’t you use it! 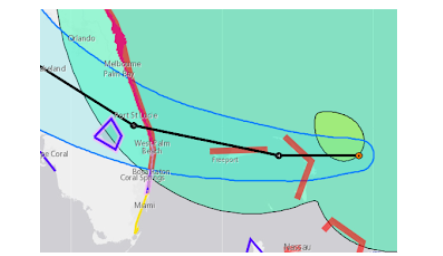 7 AM Cone a drop further North.

And only for the “center”

Blog talks on this later.

Not much of a center …

The shaded area is a zone

With the associated cone.

I do think once on land the presentation will look better and rain may amp up  more than what you see now in radar imagery. Compare this cone and zone of weather dangers with the previous one, they pulled it just a drop South. Pembroke Pines where I have several kids are now in the Cone, the children go to school in Coral Springs and North Miami Beach. All those private schools closed, it makes no sense not to as their students come from areas in the Cone (now) and their teachers and staff do as well. Just an example.

Follow the NHC advice but know WEATHER happens in REAL time and the CONE is only to track the Center and the “weather” (wind/surf/flooding) is far outside the “center” being tracked. IF you can work from Zoom at home, do it! And, I mean for people in North Dade County (Miami) and if you must travel to work take your own personal safety seriously as squalls can pop up anywhere with strong winds, moving fast and you can be out driving while debris of any kind hits your car or lands in front of your car. It’s not a good weather day today and tomorrow in South Florida, and Central Florida is getting a strong storm that may deliver a much larger punch than they expect. Along the coast, it’s very dicey so watch TWC on air or people on YouTube who either are taking risks they should not or know what they are doing.

But this is my concern below! 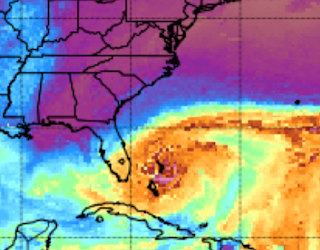 This is a current image from MIMIC loop.

Simply for this purpose.

The High has dug in deep above Nicole.

Steering it WSW not West.

I’ll believe it when I see it.

It is “forecast” it’s making the turn to W.

This is the old Ian, Charley story with a storm coming in fast along the coast and the coast curves. At the  moment it’s at the point it could make landfall near WPB or curve up slide in somewhere North. But if it doesn’t or it doesn’t do it fast enough then the huge metropolitcan area of Miami-Ft Lauderdale sits in the path of direct impacts from Nicole. Miami and it’s associated cities of Hallandale, Hollywood and Ft Lauderdale are going to get way more than they were forecast to get and IF the NHC moves the cone at the last minute a bit South to cover that area or puts out a Special Discussion it will be “correct” in it’s forecast but tell that to the people who had to leave their homes in Broward County (FLL) to go down to Miami to work (as it’s a bedroom community across a countyline) and many in Broward work in Miami.

But there’s not even a Tropical Storm Warning.

There’s no parameter for employers to guide them if there is no TS Warning.

Most colleges, schools and private schools closed or went to Zoom. An example being FIU that has multiple campuses in the Miami area so far has refused to close though many of the staff and students live in areas where there are various TS warnings or surge warnings along the coast. FIU Bay Campus is well on the bay and most of the students come from places such as Aventura that are not in the TS warning but are prone to flooding, already have had some flooding and can’t get to their classes which have not been cancelled or put on Zoom.  Extrapolate that by every person working at Target or Publix that is expected to show up and if anything changes, will get stuck out in serious weather and the answer by all will be…

This is always the issue, especially when you have a strange mishaped storm that contains wild impacts across a large area far outside the cone.

But we are watching the cone and yes they do a great job putting the yellow area on it to show people weather is far outside the center but it doesn’t work as people have been programmed over time to look at the Cone and the line in the cone. So let’s look at that line in the cone. 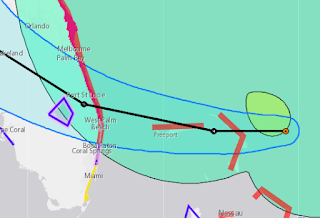 So they could nudge the cone S at 10.

Put Coral Springs in it.

But most people in Broward County FLL

Commute to jobs in Dade. 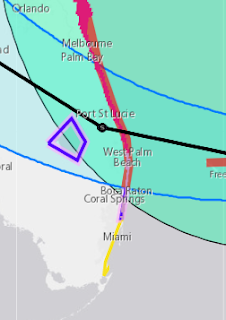 The area from Miami to WPB is one area.

People commute to work and school.

No one is sure what to do in Miami.

And Nicole is moving faster now at 13 MPH

Almost always sticking with a forecast is good as usually over times bumps and dips smooth out and follow the earlier forecast that verifies, but then you get storms such as Irene where the NHC held their line with their forecast center to track across the SW coast of Florida and all the heavy flooding rain was dumped on the Miami/FLL area (causing deaths, several children died) and people in Miami had no warnings and employers insisted people come to work, before Zoom obviously. 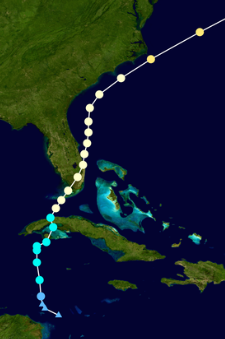 The actual track was not over Miami.

The weather and impacts were.

Generally…….the track is solid and the forecast is good, but how it’s translated is not good and they try they really do but people over the years have been trained to watch the Cone, the line in the cone.

Again bottom line it’s forecast West movement and should make the curve more to the right later on, but will it and what it really does compared to the forecast in exactitude .. a matter of degrees and the WEATHER of all kind is FAR OUTSIDE THE CONE so know it’s not a day to explore and drive around if you don’t have to …stay safe, watch for any changes in real time to the forecast especially your own local forecast.

Will talk about Nicole later today when I’m back. Track up the coast impacts the whole EAST COAST of the US so Nicole is not a storm that people will forget easily.

Communicating this type of storm vs a regular storm is difficult and many are worried and many think “it’ll be nothing even in Boca and WPB” and in the end time will tell what Nicole really does.

Hate to see a problem such as we had with Ian, really hope this follows the forecast cone that is not ever set in stone as we have way  more time before it makes landfall. Remember that!