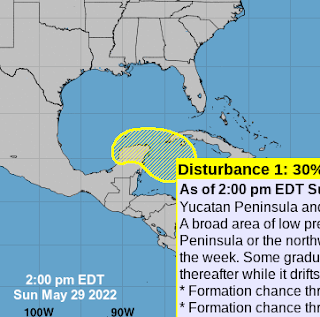 Above we have a yellow 30% circle around the Yucatan.

Down below we have the cone for Agatha! 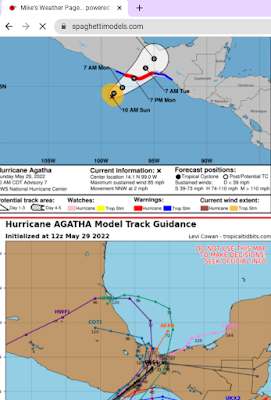 The juxtaposition on his site is perfection!!! 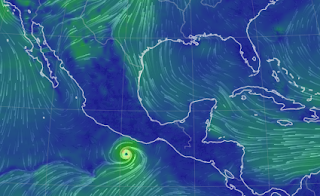 Check out that neat circulation and eye!

Discussion from NHC below. 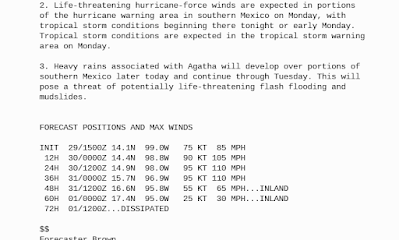 Before going further I want to point out that models do show something could develop, possibly, in the Atlantic Basin that could come together directly from the remnants of Agatha. Please remember, Agatha currently is a small, well built hurricane that may not make it intact in any way across Mexico. Depending on the exact tract models show it finding the narrow path and others take it the long way across the Yucatan Peninsular. See models above and I will show more below. It’s also possible that a random piece of energy in the Central America Gyre tries to come together with or without the DNA from Agatha. 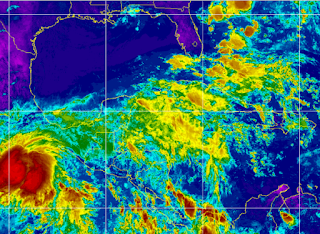 The CAG often spits off pieces of energy that IF they get over warm water and relatively light shear in an area without heavy Saharan Dust can often form into a named storm or Tropical Depression. Either way an area of interest is expected to show up soon in that part of the world. Just as the GFS fantasized about a Hurricane forming, the EURO has been doing the same with this set up. We continue to watch each run and we have plenty of time to watch before anything actually forms. And, there is a general SW to NE orientation as seen above of this moisture trail that slides off the CAG and at the same time the remnants of an old frontal boundary. 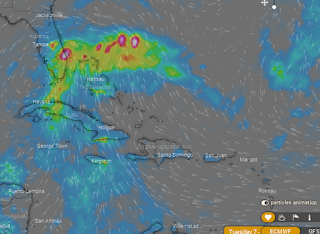 Every run is slightly different, but this run of the EURO shows a broad circulation in the GOM and a large area of thunderstorms over Florida and the Bahamas down the road. On that same road the GFS cooks up something a bit different suddenly showing up South of Cuba.

Then days later it ends up in the Bahamas. 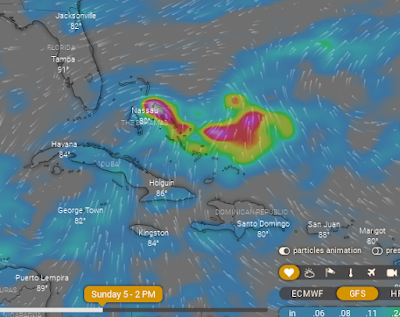 In the image above you can see moisture/thunderstorms on the NE side of a small circulation sort of center (very iffy) that may or may not come together. In ways the GFS and EURO are fairly close together on a mass of moisture and a broad center area that doesn’t seem aligned in any way but bringing WEATHER to the same general area.

I’ve often said that after a storm forms in the EPAC the Atlantic side comes alive 5 to 7 days later. Sometimes on rare occasions, that’s because part of the DNA energy if you will crosses over and helps spark development. More often it’s because when there is something on the West side of Mexico there then shear is stronger on the East side of Mexico and that inhibits tropical development on the right side of the EPAC system that is close in to the coastline. The atmosphere can only support so much energy in June and shear from an EPAC storm inhibits development in the Atlantic, no matter how warm the water is that is worth remembering.

Crossover storms do happen and the link to the list of all the storms is shown below.

It happens usually in August and September and again these are Hurricanes not Tropical Storms and again a well developed hurricane has more… let’s say Oomph to it to help keep it together. Noticed 1988 had two such storms. June may be too soon for an actual crossover event. However, the general CAG may help develop another area of Interest that becomes an Invest that we watch to see if it can get it’s act going.

Fun times in the tropics … use Memorial Day Weekend Sales to stock up on things you may need for your Hurricane Supplies. Paper Plates… canned food, snacks, outdoor lanterns, citronella candles to keep the skeeters away when you are dining outside because there is no electicity in your house. Don’t say I didn’t warn ya…

Ps … Come Monday we will know more on the possibilities!

u saw that comin didn’t ya??