This is the real take away from the 11 AM. 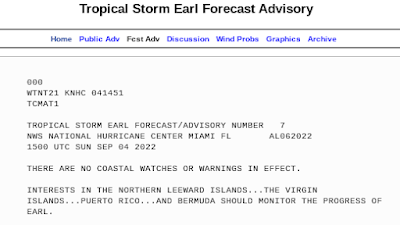 Note there are NO watches nor warnings up.

But they are mentioning bad weather could happen.

NHC seems confident in their forecast.

This is one of the better images to show as it shows how close to PR Earl is (not to mention the Virgin Islands) and yet as it’s sort of dead in the water forward speed wise as it is not forecast to directly impact the island. Yes, I redundantly did that on purpose as well as mentioning the VI on purpose.  Strong squalls could create flooding as tropical storms and depressions are prone to do due to the terrain and copious amounts of moisture that these storms possess. Also, this image shows why Earl is crawling along at 3 MPH more like anchored than crawling in my opinion.  There’s high pressure behind it on it’s Eastern side that has propelled it West (or WNW) and on it’s WNW side there is a big more high pressure …shear from the SW keeps pushing it away from PR as well as inhibiting it from stacking properly in the atmopshere as the shear blows off the cloud tops, other wise we would have a dangerous situation here vs a discombulated tropical storm with multiple centers that are vying for dominance at different levels in the atmosphere.  Discussion from NHC explains this well and this is why I have said on Twitter I’m more curious on the 5PM than the 11AM as we should know more by then. 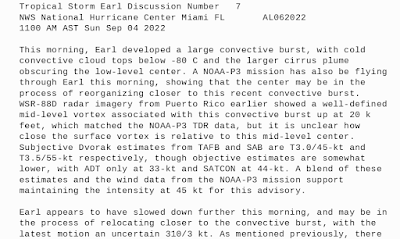 “may be in the process of reogranizing closer to …

That’s what I wrote on earlier in this blog…

“but it is unclear how close the surface vortex”

(we aren’t sure yet time will tell)

The NHC tends to be very conservative with systems such as this and they wait for consistency with convective bursts before jumping onboard an out of control train. And, even though online people shoot the tropical breeze discussing every change in appearance or new model run the NHC waits to see a real change of intensity and direction and that’s wise. And as Recon is out there if something changes definitively they will find it. Nothing like recon, it beats model guidance and good recon that finds a true center will only make the next few model runs better!

Until a Tropical Storm aligns properly in the atmsophere vertically each burst could end up a bust and that makes the difference between a poorly aligned storm such as Debby with great reviews by the models and Dorian that the models didn’t like until the following model runs.  Debby wasn’t aligned and tipped over, Dorian was and became a mean, lean fighting machine. Though in the case of Earl it is not forecast to interact with large mountainous land masses so if it does intensify as a Fish Storm it should be very photogenic.

And, honestly there are plently of tropical storms that few remember between those two extreme examples.

Best advice for PR is to remember Earl is there.

I do think it will be a hurricane sooner rather than later, but until it happens I’m just shooting the tropical breeze. As always the NHC is the bottom line, the buck stops there in all ways.

Wait for the next update at 5 PM from the NHC. I dislike slow moving storms that stall out or crawl such as this, but if it does intensify it will help it catch it’s ticket out to sea and save many other places from a possible landfall.

Danielle is still up there. Oh look it also has weak steering currents.

2022…. weak steering currents in the Atlantic in September who saw that coming in May?

Please read the rest of the blog written at 10:30 AM where I gave my thoughts before the 11 AM came out. I do that on purpose as many online write after the 11 AM and I’d rather give my thoughts (right or wrong) and update after the next advisory. I’m a big believer in compare and contrast. I’m also a big beliver in the MIMIC showing more than some models and being almost as good as the Water Vapor loop but then again they are both related by DNA… as they follow the moisture. As it’s barely moving everything I said at 10:30 AM is still relevant. 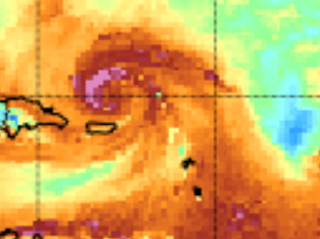 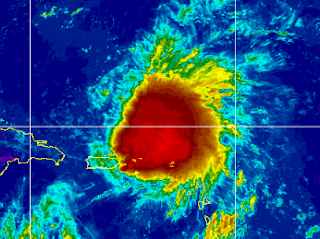 This was written at 10 and not much has changed. 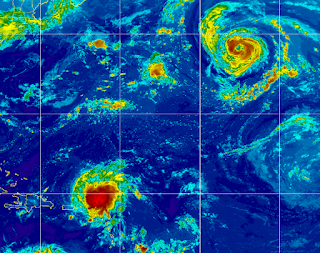 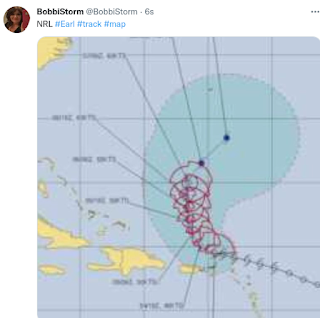 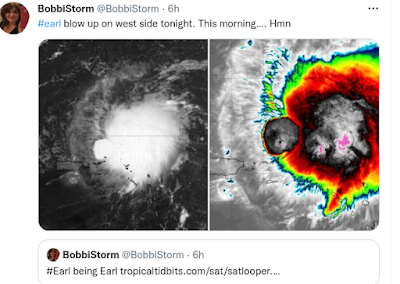 I couldn’t sleep last night, no matter what I did, and ended up looping loops at 4 AM of Earl doing strange things in the middle of the night. A “pimple” like bubble formed on the Western side despite strong SW shear and at some point the bubble became almost as big as Earl. Earl expanded in size and it’s possible one of the vying centers mentioned in the 5 AM discussion from the NHC was taking over as the new center. At 5 AM they said the “advisory position is a mean center between these features and a little north of the new burst” as you can see in the image below.

At times now an eye like feature pops out.

This is not a 50MPH Tropical Storm. 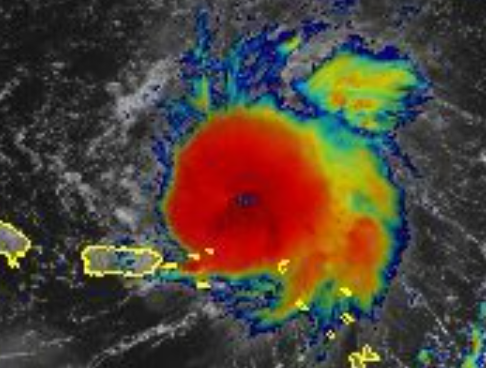 It’s getting a shape.

You can see where banding would begin.

Dvorak is a great tool to see what’s really happening.

If you watch this video above, you will see that Earl is pumping and something is going on. That actually is “good” as a weak tropical storm goes West and a stronger storm should lift in latitude more and therefore the turn to the North should verify. Note I said should and nothing in tropical weather is 100% accurate until AFTER the storm has finished it’s trip around the Tropical Atlantic. 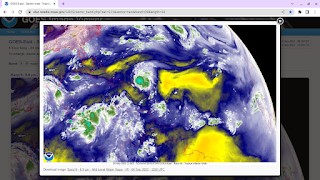 So stay tuned. I’ll update later after the 11 AM. But it’s not in an easy place between a strong High pushing it West and a bit of shear and dry air to the North and odd things happen in this part of the world. It’s easy to laugh off bad early models with Andrew, but Dorian was 2019 (not so long ago) and it wasn’t forecast to do what it did. The Virgin Islands didn’t get warnings for a fast intensifying storm that went Hurricane suddenly and earlier models had it moving steadily towards a vacation in Florida somewhere. But, it pulled together suddenly and exploded a bit further down the road and moved ridiclously slow over the Bahamas and never made it to Florida and that was a mean 3 years ago so reminding you things can change fast in this part of the tropics and then the models will run another run and the NHC will explain what happened.