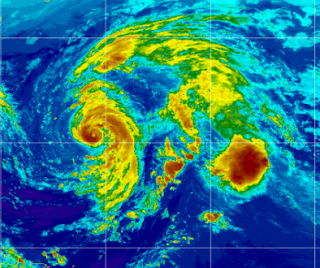 And it’s own blob!

2020 has been blobby interesting.

In the Caribbean we have convection.

In October we watch covection carefully there. 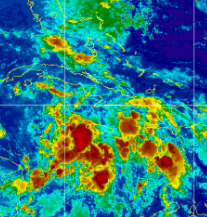 Not nuch to say on Epsilon.

Not yet much to say on the Yellow Circle 30% 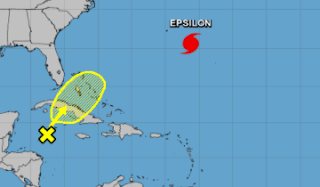 I’ll update if things change with the Caribbean.

Maybe talk models if models decide to weigh in..

…currently models are wading around in the water.

Not yet ready to swim…

Hurricane Epsilon packing 90 MPH winds moving along in it’s projected path putting on a beautiful show on satellite imagery while eventually going out to sea and off to Europe. In the Caribbean we have an area of congested convection that’s bubbling all over in a pocket of light shear yet nothing is happening of great merit other than it is there and it will move up over Cuba, towards South Florida and the Bahamas as a messy mass of tropical rain that will continue to cause flooding problems locally depending on where the worst of it happens. Could a Low develop within that area? Yes, some models show a small L over South Florida and the bottom line is that you just gotta watch in real time.

Close in development usually happens fast and pops up somewhere within an area of low pressure and convection or should I say lower pressure than the pressure around it and it’s that time of year so it’s important to watch. Has the window closed or did they just tape up the windows and is Mother Nature socially isolating with regard to the Caribbean?

A Cold front is expected to move down across part of Florida but will it surprise South Florida or surprise everyone with a lack of cool air and then they have to wait til Thanksgiving. That’s kind of the timing, an early “winter” feel gets to Miami around Halloween where it surprises everyone and pushes through providing a cool night of tricker treating or they wait and wait until Thankgiving for that first real cold front?

The  mix of tropical and frontal is the question and so just keep watching. Day by day we get where we are going, so take it one day at a time. IF and when models show something everyone jumps on it with lots of hype and ballyhoo and then it tends to fizzle out fast so this time of year I err on the side of POP UP surprises, and close in development over long term model drama verifying. It’s just hard for models this time of year to properly estimate the strength of the cold front and the Euro has had problems all year with long term development so just enjoy the day without too much problems.

If you live in South Florida…sorry about that because your yards are flooded and it feels like you are living in a swamp. Don’t tell the Chamber of Commerce this but you are living in a swamp, and Houston for that matter was built in a swampy bayou as well. Few rules on zoning or regulation and people built and the town grew and they both became huge metropolitan areas built where no one would have ever imagined you’d build a huge city.

Everyone likes to talk about the problems of Miami Beach with regard to flooding or beach erosion but back in the 1960s and 1970s before they decided to build a beach there wasn’t much of a beach there. Yes they built the beach at a huge cost sof money that sand by sand would often float away more on a Northern wind in the winter than a hurricane wind. 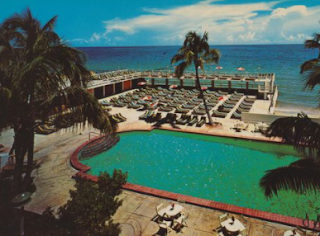 See that little line of sand ….

… Just South of the elevated shuffle board court?

I was married on that shuffle board court

…at night in a thunderstorm.

400 people or more gathered around the pool

….waiting to dance inside.

That was our beach.

That was my beach.

You’d climb up there…

..and look down at the waves.

Crashing against the wall before the pool…

…that was basically 5 blocks from my house. 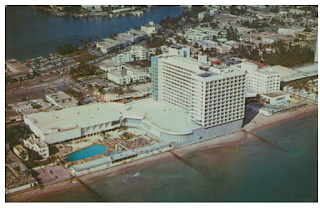 That’s a real picture of our Miami Beach…..

…before they built the beach

Sometimes we’d walk over to the beach at high tide and sit down on that “sea wall” area and dangle our feet down into the warm water and often the tide would hit our knees and we’d stare out at the ocean and the tourists splashing in the water but you couldn’t really “walk” on the beach because those dividers were there (rusty too) and only crossable at low tide and even then carefully. You could sit there on the sea wall and make out with your boyfriend as the waves slappedat your feet as they hit the concrete wall beneath you and splashed back up at you or you’d just give up and go over to the Eden Roc parking lot, walk out onto a somewhat “normal beach” under carefully planted palm trees and do what teenagers do when the moon hovers low over the beach in October before the Snow Birds flew in with the first snow “up north” and then it got noisy and crowded and that was life growing up on Miami Beach back in the day. The local kids owned the Boom Boom Room of the Fountainbleau and enjoyed empty hotels and we thought beaches without sand on them seemed normal.

Then they built the beach at a high cost and after much arguing and a strong winter storm tore at it; the Perfect Storm made it even worse and they built up the dunes higher, replenished the beach and built a boardwalk that was fun to walk on but I gotta tell you as CRAZY as it sounds looking at old postcards last night I had the crazy realization that it was more glamourous to the tourists to go to Miami, check into a hotel and run out to the beautifully kept pool… show off your bikini and get a tan and figure out which guy you were going to flirt with and then look over at the BEACH right there BAMB incredibly TURQUOISE just at the feet of your pretty painted pink toes standing by the pool looking over at the beach thinking “do I wanna swim in the ocean or float in the pool?”

As crazy as it sounds it was even more tropical and dramatic that the Atlantic ocean all turquoise, aqua and warm and inviting in the middle of the winter was just below your hotel room’s balcony and just at your feet like you are deciding whether to have a tropical sundae or a pina colada milkshake? I mean pool or ocean? Hmnnn all at your feet and disposure and beautiful and inviting and so up close and personal. The first time I went back to Miami Beach to visit my family in the Mid 80s after living in LA for a while my family took me to the “new beach” and I had to walk what seemed like a mile to get to the beach that felt rough beneath my feet as if they ground up coral and mixed it with beach sand and it was hot ………”oh my gosh” hot and I thought this looks crazy; before they built the dunes later and the boardwalk after that and it felt like you had to walk a mile over hot rough sand that felt like cut glass to get to the beach. And, Miami kids generally swim in pools vs the beach so I get it was nice for the tourist industry but it seemed a bit crazy, expensive and what else is new in Miami Beach that will do anything for the tourits. But now I look at old postcards and remember when I was a little girl and you walked just past the pool and there was the ocean slapping at your feet.

Spoiler alert: Only Miami people went to the beach hotels then in the Summer… they had wild deals and everyone would go stay for long weekends when Miami people owned Miami Beach and when the snowbirds flew South we’d go to Crandon Park, Haulover or Matheson Hammock to swim with the locals. 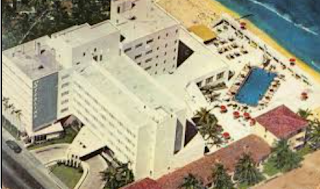 Nice hotel my parents went to often in the summer.

Beach and the pool.

The view was at your feet.

When you stood up from the pool..

…the breeze from the beach gave you a kiss.

In truth no one should have overbuilt Miami Beach.

But they did… it was just a sandbar…

a sandbar with some mangroves.

..and built a kitschy one.

But NY snowbirds loved it! 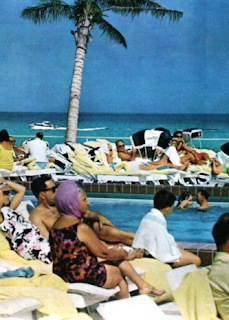 But there was the beach and boats…

… just past the palm trees! 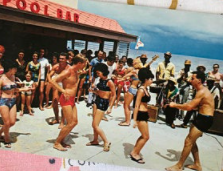 Thanks for indulging me if you are still reading. My son sent me a video last night about the birth of Art Deco and I began Googling old hotels and it suddenly hit me and I remembered “oh my gosh the beach used to be at our feet” and it made me think a lot obviously.

https://www.facebook.com/MDPL1976/videos/387139792655182 Art Deco History … beautiful video for anyone into art, architecture or history. Basically at some point they not only paved paradise but figured out they could paint in Art Deco colors that looked awesome against sunny skies and dark skies. Originally most of those hotels were white as the postcards show. A look below at a photo I took while out storm chasing with my best friend shows how dramatic those arty colors look against a stormy sky! 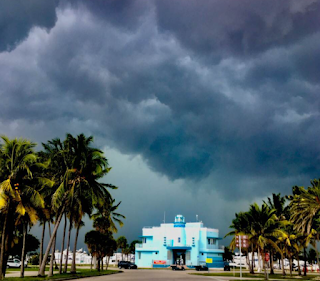 In truth Carolina Beaches are real beaches …they are beautiful, no one ever built skyscraper condos on Cape Hatteras evolving into a city the size of Manhattan on the shifting sands of OBX and yet in Miami Beach they bulldozed the mangroves with an elephant carrying a log because the  mangroves were so hard they broke the machines! They filled in the swampy area of the middle of Miami Beach with decaying mangroves and then they built up along the very narrow ridge that ran about a block East of the “beach” where people used to build campfires and picnic after rowing over from Miami in their rowboat… then flappers took to modern bathing suits that look more like sundresses today and splashed around advertising it was always June in Miami. That’s a lie by the way but when you are selling swamp land, you do tend to lie a lot. That narrow ridge is basically Collins Avenue, now a canyon of hotels, condos and artsy skyscrapers that are beautiful but should never really have been built on a sliver of a sandbar. Yes, when it pours it floods and as a child I saw the flooding but it was puddles but as the population grew it got worse and worse as we really never learned to live in concert with nature vs redecorating it and rebuilding it the way we want. A problem just as big as Global Warming and there are many Island paradises that put up rules for ecological reasons and have a low footprint and profile. That said… what a few from those condos on Miami Beach .. if you wanna give me one, yeah I’ll take it!

A little bit of history on how Miami Beach became Miami Beach vs a place where Miami people rowed over during daylight hours to picnic on a pristine beach.