HERE COMES THE HEAT: Birmingham’s official high yesterday was 91 degrees; the first day with a high of 90 or higher this year (based on the official observations at the airport). The average date of our first 90 degree day is May 23, so we are a few days early this year. Look out for low to mid 90s later this week (Wednesday through Friday)… it will be the hottest weather so far this year as an upper ridge strengthens over the region.

We will mention a few isolated storms later today, mainly over the southern half of the state. Like yesterday, where storms do form, they could produce small hail and gusty winds, but most of the state will stay dry. The high today will be in the mid to upper 80s.

The rest of the week looks mostly dry with sunny days and fair nights under the ridge. A few spotty showers could show up Wednesday over the Tennessee Valley of far North Alabama.

THE ALABAMA WEEKEND: The upper ridge begins to weaken, and as a cold front approaches we expect an increase in showers and storms. Understand the weekend won’t be a “washout”, but a passing shower or thunderstorm is very possible from time to time. The sky will be occasionally cloudy, and highs will drop back into the low to mid 80s.

NEXT WEEK: For now the week looks fairly routine with warm, humid days and some risk of random, scattered showers and storms pretty much on a daily basis. Highs will be mostly in the mid to upper 80s… See the Weather Xtreme video for maps, graphics, and more details. 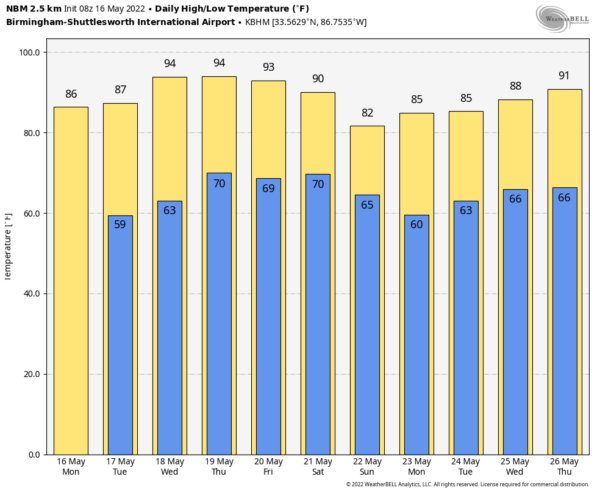 ON THIS DATE IN 1989: Thunderstorms developing ahead of a cold front produced severe weather in the south-central U.S. Thunderstorms spawned twenty tornadoes, and there were 180 reports of large hail and damaging winds. A tornado in Cleburne, Texas caused thirty million dollars damage. A violent F-4 tornado touched down near Brackettville, Texas and a strong F-3 tornado killed one person and injured 28 others at Jarrell, Texas.