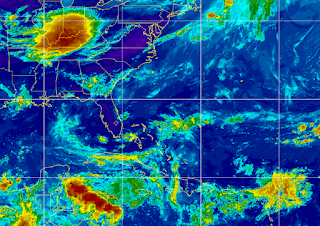 Okay, the state of the tropics on June 16th going into Father’s Day Weekend. My husband is in HOT Phoenix visiting my stepkids… (young adults) hopefully drinking water. It makes the forecast 100 degrees in Raleigh look “not that bad” and next week I’ll be in Hot Atlanta for a family wedding. Hot, Hot, Hot is the theme of this week everywhere it seems. And, yet…….the tropics are fairly quiet. Shear, Saharan Dust get a vote this time of year. Had Invet 93L made different choices (perhaps watched the hyped up models) then we would have a tropical storm lingering near the tip of the Yucatan debating which way to go and being scared to death of that mean Huge High HUGGING the SE. But, it chose a path in life that prefers being closer to land and crawls caterpillar like up, along the beautiful curves of Central America and the nearness of land inhbits development. IF it does develop, it will definitely be a late bloomer.

And, I also want to mention, that huge red blob on Planet Earth near the New Madrid Fault that keeps appearing, reappearing and never seems to leave has been the main weather maker this June. What happens in July we will see. I don’t like to talk on monthly models for weather as the models haven’t been great and CLIMO rules almost always.  Can the caterpillar turn into a beautiful tropical butterfly named Bonnie? Time will tell….. 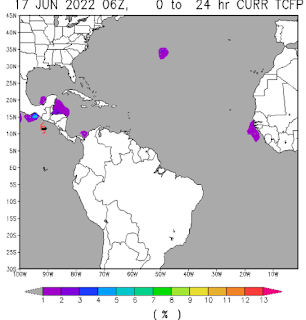 Areas to watch… at the least.

I mean we are always watching…right?

These are things we look at before the NHC weighs in.

If any area shows real potential the yellow circle comes up!

Over water, what does it do?

Poof or no poof?

Many believe in this little tortoise…

Another indicator of possibilities.

Not always of the tropical nature.

A lot of energy down there still..

Off the Florida coast, old front kicking up showers.

Note this is informative even for the newbie!

3 Hs in the SE blocking tropical action from coming in.

That changes in real time based on the High…

Huge high the old frontal boundary rubbed up against!

I want to go longer here in that what most people don’t realize is that the Monsoon Trough in the SW Caribbean connected to strong storms often over South America is a real producer of tropical trouble. Most of us love to watch Tropical Waves off of Africa and the ITCZ they travel across as the main producers of HURRICANES but in fact that Monsoon Trough in the SW Carib produces both Atlantic Hurricanes often early in the summer and then again late in the Hurricane Season! Some of the worst hurricanes have come up from that region and slammed into the Gulf of Mexico, Florida and some kept on going creating horrific floods in the far Northern regions of the US and Canada.  So it’s not all about the ITCZ, even though most of you think all I do is watch waves coming off of Africa! Also, if the old cold front begins to erode the Western edge of the High Pressure in the Atlantic then a window or even a door opens up for tropical trouble to happen in the GOM or Florida, just saying. 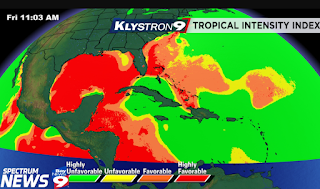 And, the water is heating up FAST.

Not this week, it’s filling in fast going red!

That’s trouble especially along the GOM..

..and Florida near the Gulf Stream! 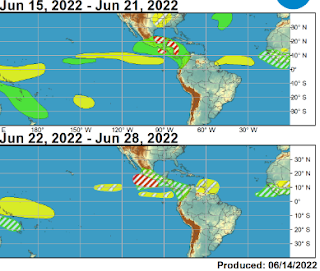 Last indicator many can use is the one above.

It is updated over time, this was from June 14th.

It’s a 2 week look at the tropics.

Above average rain in the ITZC

And check out Africa…

Ps …Didn’t proof or I’d be late for a lunch date so forgive me if I messed anything up and I’ll fix it later. The heat gets to me, asthma wise and otherwise.

Wild Summer Nights, thunder and lightning at sundown and humid evenings… getting clsoer to the Hurricane Season!!