RADAR CHECK: So far showers and storms are slow to develop across Alabama today. Most of them at mid-afternoon are over the northwest corner of the state, but keep in mind a shower or thunderstorm could form at any place over the next few hours. Temperatures are mostly in the low to mid 90s, and the sky is partly sunny. Scattered showers and storms will end later tonight after sunset. 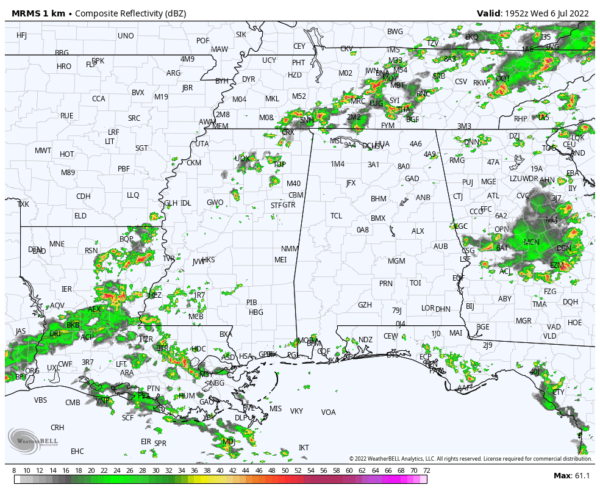 TOMORROW THROUGH THE WEEKEND: Highs will remain in the mid 90s tomorrow and Friday, and the “heat advisory” will remain in effect as some spots could see the heat index touch 105. The sky will be partly sunny both days, and again random, scattered afternoon and evening showers and storms will develop mostly between 2:00 and 10:00 p.m. Classic summer weather.

THE WEEKEND AND NEXT WEEK: The core of the upper high will shift to the west, and heat levels will drop a bit over the weekend and next week with afternoon highs closer to 90 degrees. The overall forecast remains the same with partly sunny days with “scattered, mostly afternoon and evening showers and thunderstorms” around daily. Coverage of the afternoon showers will be a little higher with odds of any one spot getting wet in the 40-50 percent range most days. See the daily Weather Briefing video for maps, graphics, and more details. 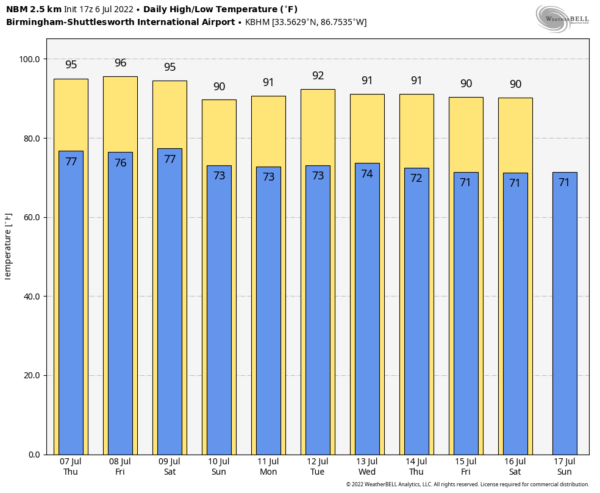 TROPICS: All remains calm across the Atlantic basin, and tropical storm formation is not expected for at least the next seven days. FYI… the next named storm will be called “Danielle”.

ON THIS DATE IN 1893: A violent tornado killed 71 persons on its forty-mile track across northwestern Iowa. Forty-nine persons were killed around Pomeroy, where eighty percent of the buildings were destroyed, with most leveled to the ground.

ON THIS DATE IN 1928: A seven-inch hailstone weighing 1.5 pounds fell in Potter Nebraska. With a circumference of 17 inches, this appeared to be the largest hailstone in the world at that time.

Look for my next Weather Briefing video here by 6:00 a.m. tomorrow…