RADAR CHECK: We have a few small, isolated showers over East Alabama this afternoon, but most of Alabama is hot and dry with a mostly sunny sky… temperatures are in the 88-92 degree range for most communities. Tonight will be mostly fair with a low around 70 degrees.

The weather won’t change much tomorrow; hot and mostly dry with a high at or just over 90 degrees. Then, on Thursday, we will bring in the chance of scattered showers and thunderstorms as a surface front moves through. Most of the showers will come from about 12:00 noon to 12:00 midnight, and a few strong storms are possible over parts of North and West Alabama, where SPC has defined a “marginal risk” (level 1/5) of severe thunderstorms. The main threat will come from hail and strong gusty winds. 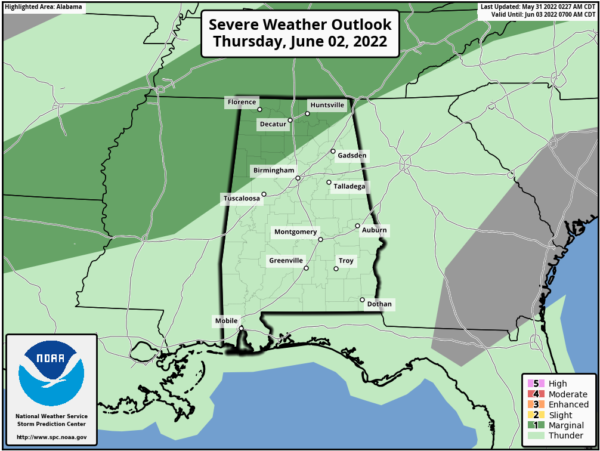 The showers and storms will be scattered, and some spots won’t see meaningful rain. But, a a few heavy downpours are possible where stronger thunderstorms develop. The high Thursday will be between 87 and 90 degrees.

FRIDAY AND THE WEEKEND: Drier air drops into the state from the north late Thursday night, and Friday promises to be a very pleasant day with sunshine in full supply along with lower humidity values. The high Friday will be in the mid 80s. By early Saturday morning, many communities will enjoy a low in the 50s. Then, look for lots of sunshine over the weekend… the high Saturday will be in the mid to upper 80s, followed by upper 80s Sunday.

NEXT WEEK: The chance of a shower is small Monday and Tuesday, but showers will be a bit more likely Wednesday as another front approaches. Thursday and Friday look mostly rain-free… highs will be close to 90 degrees through the week. See the Weather Xtreme video for maps, graphics, and more details. 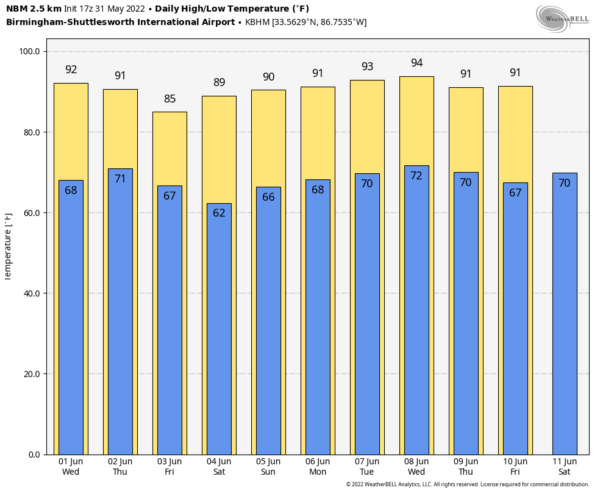 TROPICS: The remnants of former eastern Pacific Hurricane Agatha will emerge into the southern Gulf of Mexico within 48 hours, and NHC now gives it a high chance (70%) of regeneration as a tropical depression or storm by the end of the week. The system will get the name “Alex”, and will bring lots of rain to South Florida by Friday night and Saturday. For now it looks like the heaviest rain in Florida will be along and south of I-4. 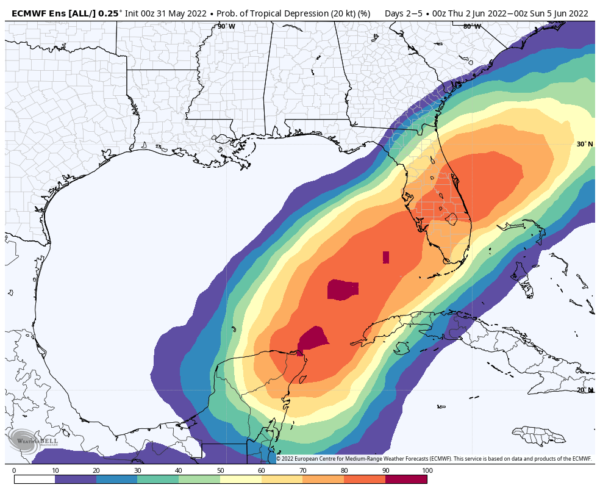 The system will stay far south of the Central Gulf Coast (Gulf Shores to Panama City Beach), but it could bring an increased threat of rip currents and rough surf late in the week. The rest of the Atlantic basin is quiet.

ON THIS DATE IN 2013: A large, violent tornado occurred over rural areas of Central Oklahoma near the town of El Reno. This rain-wrapped, multiple-vortex tornado was the widest tornado ever recorded and was part of a larger weather system that produced dozens of tornadoes over the preceding days. Remaining over mostly open terrain, the tornado did not impact many structures; however, measurements from mobile weather radars revealed extreme winds up to 302 mph within the vortex; these are the highest observed wind speeds on Earth. As it crossed U.S. 81, it had grown to a record-breaking width of 2.6 miles.

The tornado killed four storm chasers, the first known deaths in the history of storm chasing. Although the tornado remained over mostly open terrain, dozens of storm chasers unaware of its immense size and erratic movement were caught off-guard. Near U.S. 81, TWISTEX scientist and engineer Tim Samaras, along with his son Paul and research partner Carl Young, died in the tornado. Local resident Richard Henderson, who decided to follow the storm, lost his life in that same area. He snapped a picture of the tornado from his cellular phone before it struck him.