A FEW STORMS THIS AFTERNOON: The radar shows no rain across Alabama early this morning, but we expect a few scattered showers and thunderstorms during the peak of the daytime heating process this afternoon and early tonight (mostly between 2:00 and 10:00 p.m.). The chance of any one spot getting wet is 20-30 percent, and the high will be in the 91-96 degree range for most places. NWS has much of North and Central Alabama in a “heat advisory” today, meaning the heat index could touch 105 in spots, but the weather will be hot and humid statewide.

Tomorrow, SPC has much of Central Alabama in a “slight risk” (level 2/5) of severe thunderstorms… with a “marginal risk” (level 1/5) covering much of the rest of the state. With the presence of a surface boundary and very high instability levels, any storm that forms tomorrow afternoon could produce strong winds, and perhaps a wet microburst or two (local areas of high winds with potential for tree and power line damage). It won’t rain everywhere, but just know that where storms do form, they could pack a punch. 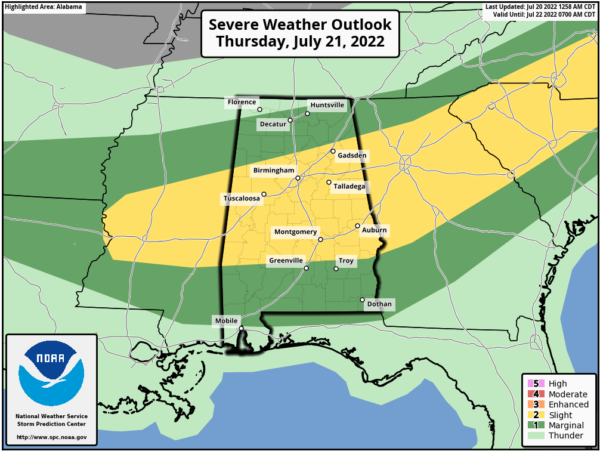 FRIDAY AND THE WEEKEND: Classic summer weather is the story with partly sunny, hot, muggy days along with the chance of a pop-up afternoon storm in a few spots. Highs will be mostly in the mid 90s.

NEXT WEEK: The upper ridge will continue to be the dominant player, so highs hold in the 90s, lows in the 70s, and afternoon storms should be widely spaced. See the daily Weather Briefing video for maps, graphics, and more details. 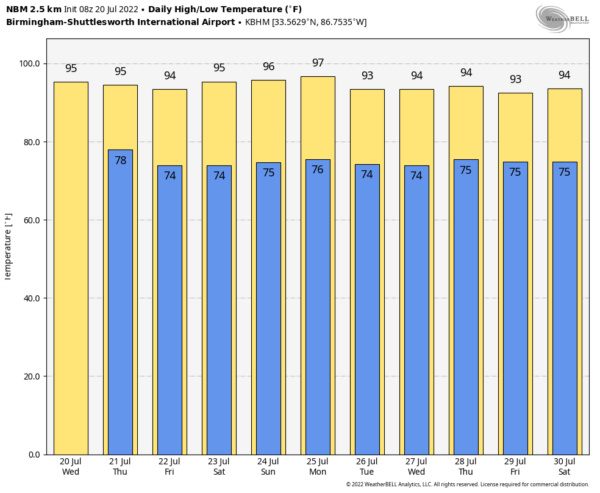 TROPICS: Another very quiet day across the Atlantic basin… tropical storm formation is not expected through the next five days. The hurricane season runs through the end of November; the peak comes in August, September, and early October.

ON THIS DATE IN 1977: A flash flood hits Johnstown, Pennsylvania killing 84 people and causing millions of dollars in damages. This flood came 88 years after the infamous Great Flood of 1889 that killed more than 2,000 people in Johnstown.

ON THIS DATE IN 2005: Hurricane Emily made landfall in northern Mexico. When the central pressure fell to 29.43 inches of mercury, and its sustained winds reached 160 mph on the 16th, Emily became the strongest hurricane ever to form before August, breaking a record set by Hurricane Dennis just six days before. It was also the earliest Category 5 hurricane ever recorded in the Atlantic basin, beating Hurricane Allen’s old record by nearly three weeks.