LATE JULY IN ALABAMA: We expect very routine summer weather across Alabama this week. An upper ridge is parked across the southern U.S… with the mid-latitude westerlies (the “jet stream”) on top of the heat ridge over the northern states. This will set the stage for partly sunny, hot, humid days with random, scattered showers and thunderstorms around during the afternoon and evening hours, mostly between around 2:00 and 10:00 p.m. Odds of any one spot getting wet most days will be in the 30-40 percent range… we do expect higher coverage later this week over the Tennessee Valley of North Alabama close to a stalled surface front just to the north. Afternoon highs will be mostly in the 90-94 degree range, right at seasonal averages for late July.

THE ALABAMA WEEKEND: Not much change in the overall pattern as hot, humid summer weather continues. Showers and storms will be most active over the northern half of the state with the stalled surface front near the Tennessee state line, but as always in summer rain distribution will not be very even. Look for a mix of sun and clouds Saturday and Sunday with highs in the 88-92 degree range.

NEXT WEEK: We will stick with a standard summer forecast as August begins; partly sunny days, fair nights, and “scattered, mostly afternoon and evening showers and thunderstorms” on a daily basis. Highs will hold mostly in the low to mid 90s. See the daily Weather Briefing video for maps, graphics, and more details. 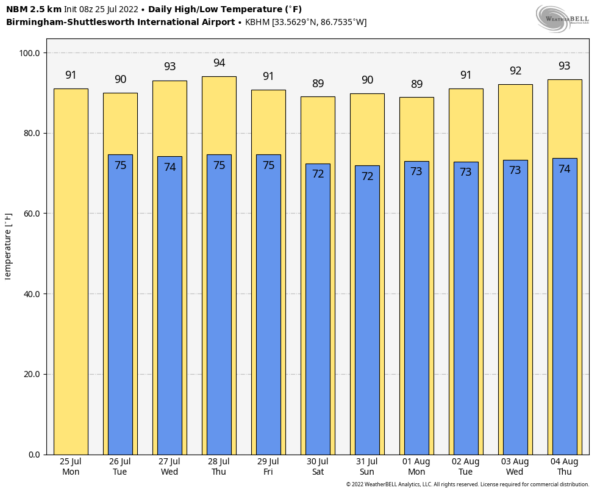 TROPICS: Once again the vast Atlantic basin is very quiet, and tropical storm formation is not expected this week. But remember, the peak of the season comes in August, September, and early October. Most tropical outlooks still suggest an active season.

ON THIS DATE IN 1936: Lincoln, Nebraska saw an all-time high temperature of 115 degrees. The low only dropped to 91 degrees and the average temperature was 103. Many people spent the night sleeping outside to escape the heat.

ON THIS DATE IN 2005: The citizens of Sand Point, Alaska saw a rare tornado touchdown on two uninhabited islands. Sand Point is part of the Aleutian Chain and is located about 570 miles southwest of Anchorage.