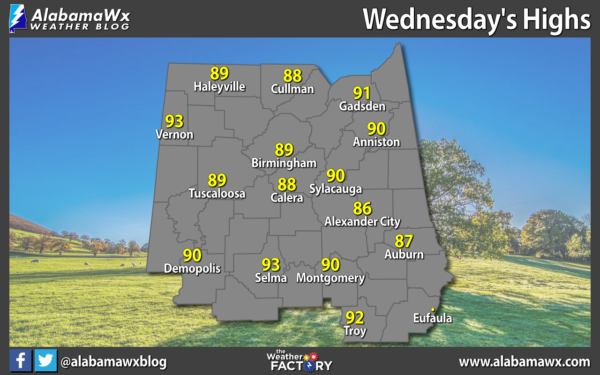 WEDNESDAY’S HIGHS: We’ll start off by taking a look at Wednesday’s highs in Central Alabama, and we see that highs were in the mid 80s to the lower 90s across the area. Selma and Vernon were the hot spots at 93º. The cool spot was Alexander City at 86º. The Birmingham Airport made it up to 89º.

TODAY & FRIDAY: Hot and humid will be the story on your Thursday as we’ll have mostly sunny skies with only a very small chance of a few isolated showers. Highs will be in the lower to mid 90s.

Friday looks to be very similar to today’s weather, as we’ll be hot with mostly sunny skies. There is a very small risk of a shower, but nearly everyone should remain dry. Highs in the lower to mid 90s.

THE CENTRAL ALABAMA WEEKEND: Rain chances will be a little higher on Saturday, especially in the late afternoon through the evening hours, as scattered showers and storms look to fire up. Highs in the lower to mid 90s.

Strong ridging over the Atlantic will cause a weak southerly to southeasterly flow across the area that will bring an uptick to the scattered shower and thunderstorm chances from Sunday afternoon through the predawn hours on Monday; however, not everyone will see rain. Highs in the upper 80s to the mid 90s.

MONDAY THROUGH WEDNESDAY: Rain chances will stay elevated on Monday as a frontal system will start to head in our direction, trapping the moisture over Central Alabama. Scattered showers and storms will be possible, especially west of the I-65 corridor. Highs will be in the upper 80s to the lower 90s.

The front slowly creeps southeastward toward the area on Tuesday, but it will continue to hang out just to our northwest. Ahead of the front, a good chance of scattered showers and storms will be possible for the northern and western portions of the area, while the rest will have a smaller rain chance. Highs in the mid 80s to the lower 90s.

And at the end of the forecast period on Wednesday… The frontal boundary moves into the northwestern parts of the area and that will make showers and thunderstorms likely at times throughout the day, especially with the main heating of the day. A few strong storms may be possible with gusty winds and some hail. Too early to know if there will be a threat of severe storms at this point. Highs in the mid 80s to the lower 90s.

THE TROPICS: Now, taking a look at the tropics… All remains calm across the Gulf of Mexico, the Caribbean Sea, and the tropical Atlantic Ocean, and no new tropical systems are expected to form over the next five days.