HOT: Look for highs in the 92-98 degree range again today across Alabama with hazy sunshine under a strong upper ridge, centered just to the northeast. A “heat advisory” remains in effect for the state today because of the high heat index values, which will exceed 100.

We do note SPC has defined a “marginal risk” (level 1/5) of severe thunderstorms for parts of East and Central Alabama today and tomorrow; a few scattered storms could develop during the heat of the afternoon in random places, and where they do form they could produce strong winds. But, understand most places won’t see any rain. Chance of any one spot getting wet today, tomorrow, and Thursday is in the 20-30 percent change, with the higher probabilities over the eastern half of the state. 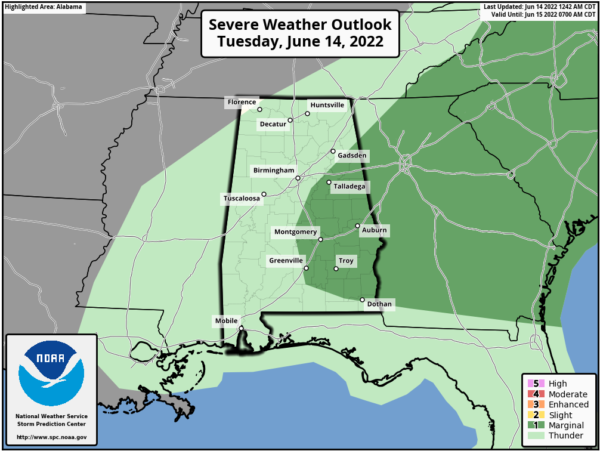 A surface front will bring the chance of a few scattered storms to the northern half of the state Friday, but again the rain won’t be widespread. Highs will remain in the 90s through the week.

THE ALABAMA WEEKEND: A drier airmass will drop in here Friday night, and that will set the stage for sunny days and clear nights over the weekend. On the positive side, humidity values will be lower, and nights will be a little cooler. The high Saturday and Sunday will be generally in the low 90s.

NEXT WEEK: Hot weather continues. Lots of sunshine each day, highs in the 90s, and afternoon storms that form will be widely spaced. Temperatures will likely remain above average through the rest of June as the upper high persists… See the Weather Xtreme video for maps, graphics, and more details. 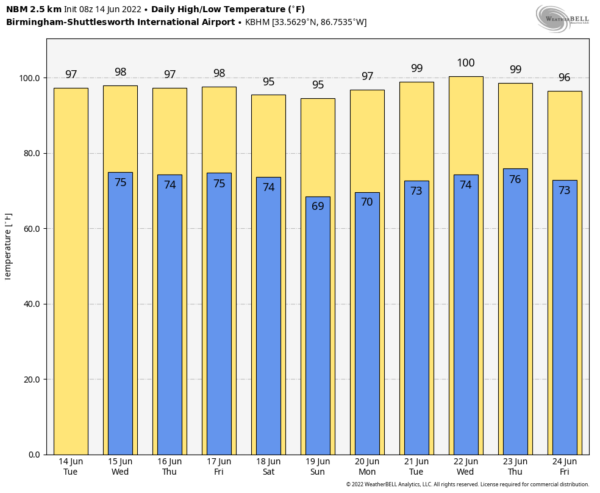 TROPICS: Disorganized showers and thunderstorms over the southwestern Caribbean Sea are associated with a trough of low pressure. Gradual development of this system is possible while it drifts northwestward near the coasts of Nicaragua and Honduras, and it could become a tropical depression late this week if the disturbance remains over water. Regardless of development, this system could produce periods of heavy rainfall across portions of eastern Nicaragua and eastern Honduras late this week.

NHC gives it a 40 percent of becoming a tropical depression or storm over the next five days; if anything forms here it will stay far south of the Central Gulf Coast (places like Gulf Shores, Destin, Panama City Beach).

HEAT PARADE: Here are some highs across Alabama yesterday…

ON THIS DATE IN 1903: Major flash flooding along Willow Creek destroyed a significant portion of Heppner, Oregon on this day. With a death toll of 247 people, it remains the deadliest natural disaster in Oregon.