RADAR CHECK: We have a number of showers and storms in progress early this morning over the southern third of Alabama, south of a stalled surface front. The highest coverage of rain today will stay south of that boundary, over South Alabama…. drier air is over the northern part of the state. Temperatures north of Birmingham are in the low to mid 60s at daybreak for a little touch of fall.

We expect a high in the mid 80s in most places today… the average high for Birmingham on August 18 is 91.

TOMORROW THROUGH THE WEEKEND: The front over Central Alabama dissipates, and moisture levels rise statewide. The sky will be occasionally cloudy each day with scattered to numerous showers and storms around. This doesn’t mean a “wash-out” by any means, and you will see some sun, but a passing shower or storm is likely at times. Temperatures remain below average because of clouds and showers; highs will remain in the 80s.

NEXT WEEK: Not much change, at least for the first half of the week, with a number of showers and storms around daily as the unsettled pattern continues. There is some evidence the air could be a little drier by Thursday and Friday. Highs remain in the 80s, and there is a decent chance we don’t see 90 degree heat for the rest of August for most of Alabama. See the daily Weather Briefing video for maps, graphics, and more details. 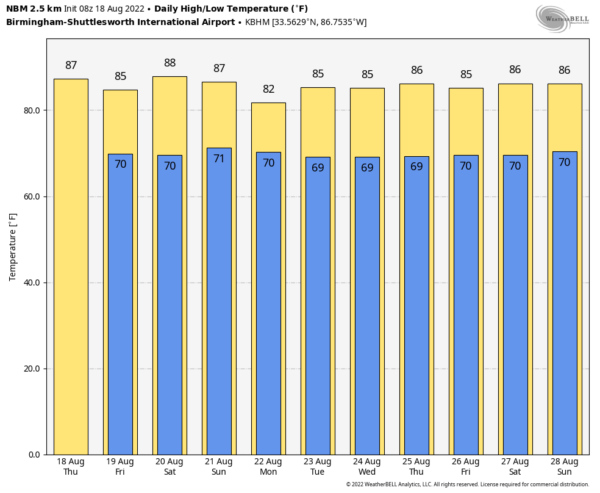 TROPICS: A concentrated area of showers and thunderstorms is associated with a tropical wave near the coast of Belize. This system is forecast to move across Central America and southeastern Mexico over the next day or so before emerging over the Bay of Campeche, where an area of low pressure could form tomorrow. Some gradual development of this system is possible while it moves northwestward over the southwestern Gulf of Mexico through the weekend. NHC gives it a 30 percent chance of development over the next five days… the rest of the Atlantic basin remains very quiet. 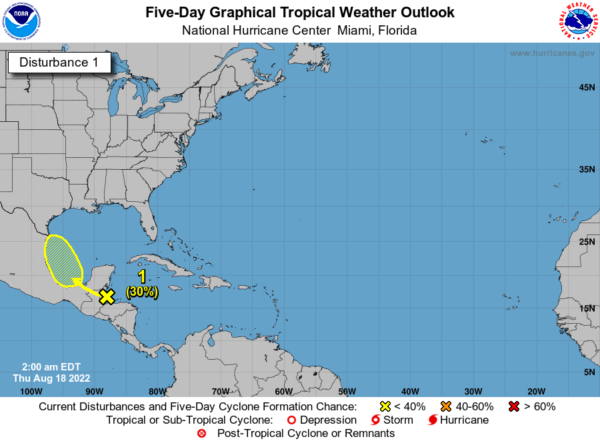 HIGH SCHOOL FOOTBALL: For the games tomorrow night, a few scattered showers and storms will be around. No way of knowing the exact timing or location, but take the rain gear, and know there could be a few lightning delays at stadiums across Alabama. Temperatures will fall from the low 80s at kickoff into the upper 70s by the second half of the games.

ON THIS DATE IN 1925: During the late morning hours a severe hailstorm struck southeastern Iowa destroying crops along a path six to ten miles wide and 75 miles long. The hail also injured and killed poultry and livestock, and caused a total of 2.5 million dollars damage. The hailstorm flattened fields of corn to such an extent that many had to leave their farms in search of other work.

ON THIS DATE IN 1991: Hurricane Bob brushed the Outer Banks of North Carolina, bringing strong winds and heavy rains. Although a maximum of 5.30 inches of rain fell at the National Weather Service office building at Cape Hatteras, little heavy rain fell inland of the Outer Banks. Bob would go on to be one of the costliest hurricanes in New England history… eighteen fatalities were reported. The loss of life and most of the damage occurred as a result of high winds and rough seas. There were six confirmed tornadoes during its passage. Bob is the most recent tropical cyclone to hit the New England states directly as a hurricane.