Temperatures are well below average across Alabama today thanks to clouds; most communities are somewhere between 75 and 85 degrees at mid-afternoon… a rare “cool” day in July.

THE ALABAMA WEEKEND AND NEXT WEEK: Heat levels rise again with increasing amounts of sun and fewer showers. Look for partly to mostly sunny days, fair nights, and a few showers and storms around during the afternoon and evening hours in random places. The chance of any one specific spot seeing rain over the weekend is 15-25 percent, and 25-35 percent most days next week. Another words, classic mid-summer weather. See the daily Weather Briefing video for maps, graphics, and more details. 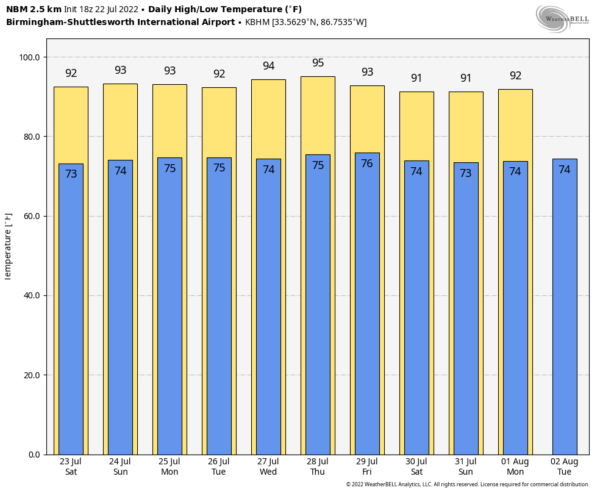 STORM FATALITIES: A 3-month old and a 3-year-old were killed when a tree fell on a home in the 600 block of 10th Avenue West in the western part of Birmingham yesterday. An 11-year-old was also in the house and was taken to Children’s Hospital with non-life threatening injuries. One woman was trapped in the house; she was freed before 9 p.m. Another woman was also rescued from the home near Birmingham-Southern College.

TROPICS: All remains very calm across the Atlantic basin and tropical storm formation is not expected through next week.

ON THIS DATE IN 1993: The levee, holding back the flooding Mississippi River at Kaskaskia, Illinois, ruptures, forcing the town’s people to flee on barges. The incident at Kaskaskia was the most dramatic event of the flood. At 9:48 a.m., the levee broke, leaving the people of Kaskaskia with no escape route other than two Army Corp of Engineers barges. By 2 p.m., the entire town was underwater.