RADAR CHECK: Scattered showers and thunderstorms are in progress over the northern quarter of the state at mid-afternoon; stronger storms are over the Tennessee Valley. A shower or storm could pop up just about anywhere through the evening hours… otherwise the sky is partly sunny with temperatures mostly in the mid 90s. Scattered showers and storms end later tonight. 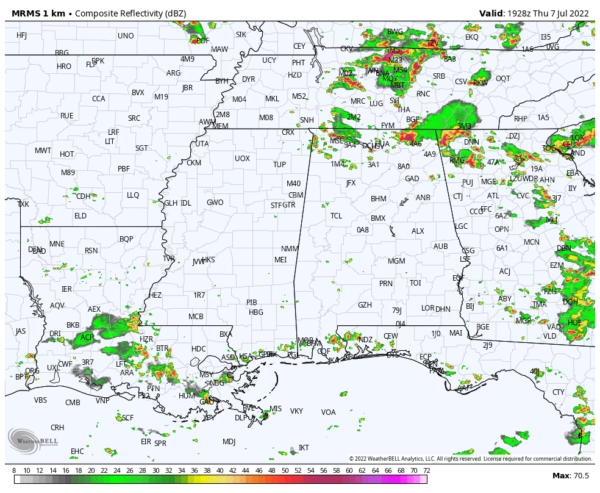 The weather won’t change much tomorrow; partly sunny, hot, and humid with a few scattered showers and storms from about 2:00 until 10:00 p.m. Expect a high in the mid 90s again… a few degrees above average for mid-July in Alabama.

THE ALABAMA WEEKEND: The heat ridge begins to shift westward… highs drop into the 89-92 degree range with afternoon showers and storms becoming more numerous. Still, it won’t rain everywhere, any one spot stands a 60-70 percent chance of seeing at least one shower or thunderstorm over the weekend. We note SPC has all of Alabama in a “marginal risk” (level 1/5) of severe storms Saturday… again the main threat will come from strong gusty winds with heavier storms. 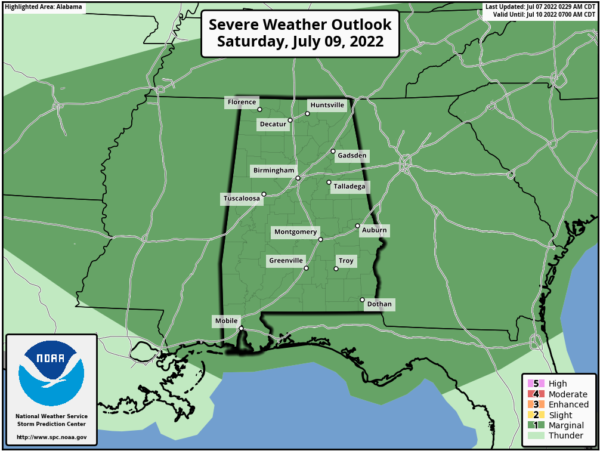 NEXT WEEK: For now it looks like highs will hold in the 88-92 degree range most days with the usual chance of afternoon and evening thunderstorms in scattered spots. The most intense heat in the nation shifts to the western states… See the daily Weather Briefing video for maps, graphics, and more details. 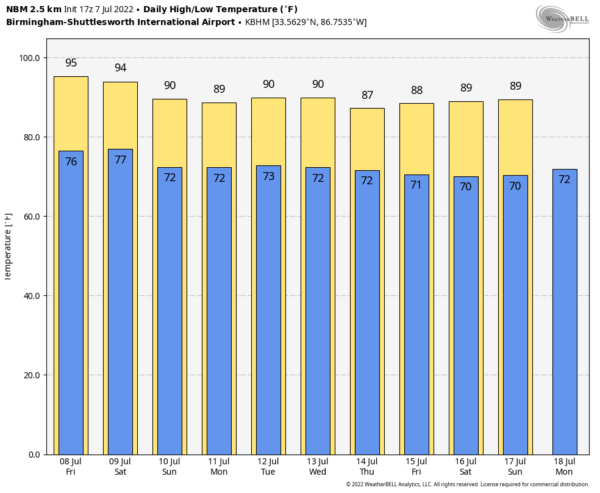 TROPICS: All remains very quiet across the Atlantic basin, and tropical storm formation is not expected through the weekend.

ON THIS DATE IN 2004: A tornado occurred in the Rockwell Pass area of Sequoia National Park, California. Since the elevation of the tornado’s ground circulation was approximately 12,156 ft MSL, this is the highest-elevation tornado documented in the United States.