Much of the state experienced a hard freeze last night, a combination of unusually cold air and clear skies, which allowed the earth to radiate heat to space.  Plus, generally light winds that lessened the mixing of warmer air down to the surface.

As a result of these ideally chilly conditions, a number of daily minimum temperature records were broken on both sides of the state.

A map of the minimum temperatures last night (Saturday night/ Sunday morning) shows teens over NE Washington (and a 9F over northern Idaho), with low 30s and 20s across western Washington. 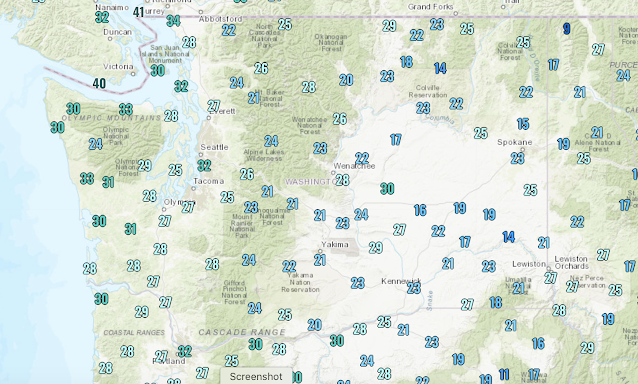 Note the cold temperatures along the Washington coast….we will get back to that in a second!

Proximity to water has a major impact on temperatures, something illustrated by a close look at Seattle and vicinity low temperatures last night (see below).  Temperatures only dropped into the mid-30s near Puget Sound or Lake Washington, but dropped to the mid-20s over the eastern suburbs of Seattle.  Classic in these situations.

But what really caught my eye this morning was not the frosty temperatures around the region, but the formation of one of the best land-breeze situations I have seen in years.

But first some land breeze 101.

Below is a schematic of sea breezes and land breezes.   A sea breeze occurs when the land becomes warmer than the water in a coastal region during the day, with low-level air moving inland.   Sea breezes cool the coastal zone.   Land breezes are the opposite, occurring when the land cools below the temperature of the nearby water.  In that case, air moves from land to water. 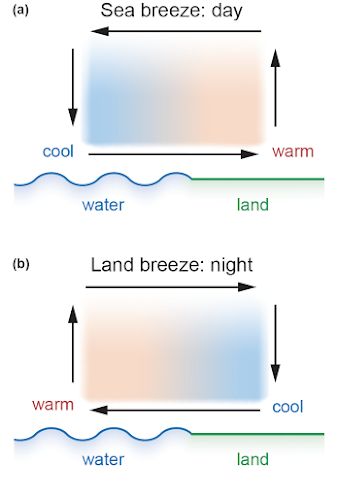 Because our water bodies  (like the eastern Pacific and Puget Sound) are relatively cool (around 50F all year round) and the land often doesn’t cool below the water temperature, particularly during the warm half of the year.

This morning we had a land breeze of note, one you will be telling your grandchildren about.  The winds at 7 AM showed the offshore-directed, easterly (from the east) flow along the coast (see below) 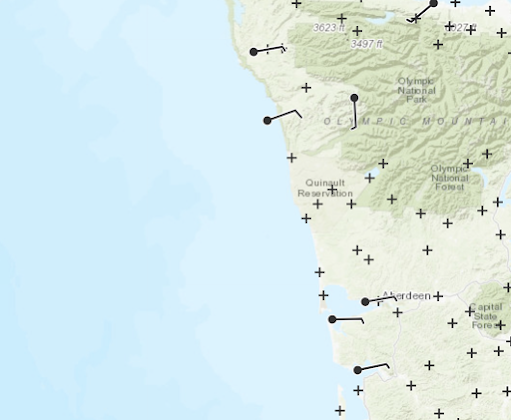 And the visible satellite at this time along the Washington coast was amazing (below).  You see the clear zone along the coast and the line of clouds offshore?

You have really good eyes?  Can you see the low clouds in the Chehalis River valley with a small tongue of river stratus jetting out into Hoquiam bay? 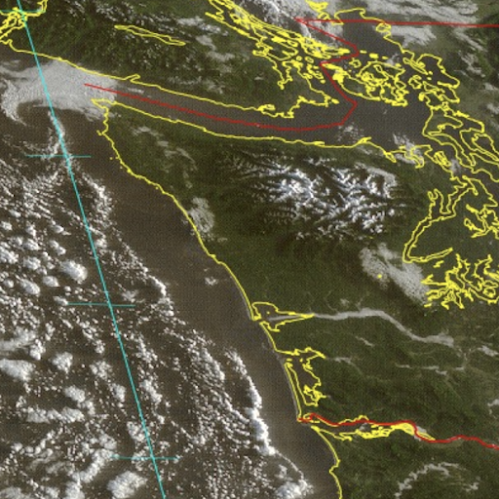 And if you want a little help seeing what I am talking about…check out the next image.  The breeze winds are shown by the blue arrows, the Chehalis cloud jet by the orange arrow, and the offshore clouds at the edge of the land breeze indicated by the red arrow. 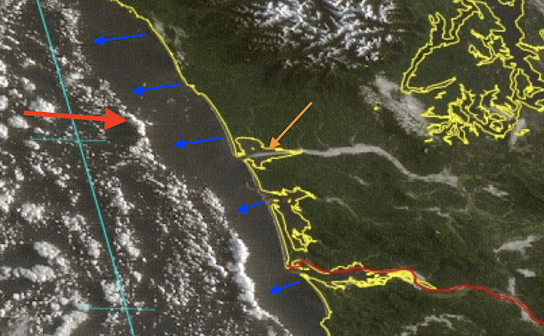 To show you how far weather model technology has come, let me show you the forecast for 8 AM from the high-resolution (1.3 km grid spacing) WRF model run by my group at the UW.

The first image shows the wind speed near the surge by wind bards, with wind speed indicated by colors (white, then blue, then green, then orange).   You can see the jet of winds coming out of the Chehalis River and the expansion of the land breeze offshore, where it converges with northerly winds. 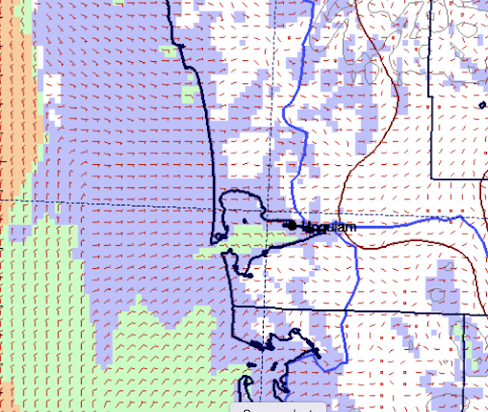 A forecast of the winds and temperatures (color shading) at the same time is found below, with white and dark green being the coldest temperatures. You can see the cold air from the land pushing over the ocean, warming as it moves westward. 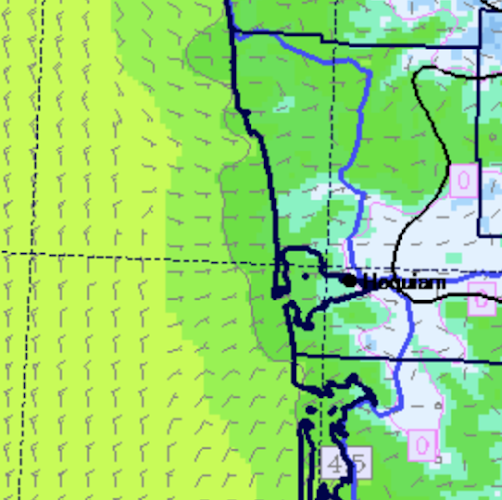 Impressively, the forecast model cloud forecast, predicts the low clouds in the Chehalis Valley and even the line of clouds paralleling the coast offshore. 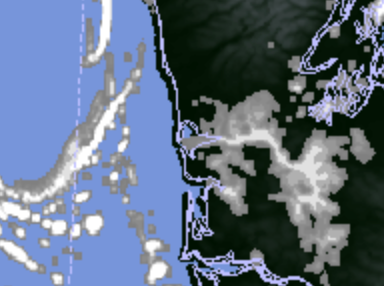 Enjoy the sunny week ahead.