ANOTHER BEAUTIFUL SPRING DAY: The sky is sunny across Alabama this afternoon, and temperatures are mostly in the 67-72 degree range. The average high for Birmingham on April 19 is 75. Tonight will be clear and cool with a low between 46 and 52 degrees.

Tomorrow will be another dry day… with a partly sunny sky we project a high in the mid 70s. A cold front will pass through the state late tomorrow night into early Wednesday morning, mostly in dry fashion. A few sprinkles are possible over the Tennessee Valley, but most places won’t see a drop of rain. Wednesday will be a breezy and much cooler day with a high only in the 55-60 degree range, almost 20 degrees below average. The sky becomes partly to mostly sunny during the day.

FROST POSSIBLE EARLY THURSDAY: Many communities across North/Central Alabama will drop into the mid to upper 30s early Thursday morning with a clear sky and light wind… some frost is likely. A few colder spots could even touch the freezing mark briefly. Then, during the day Thursday, look for a sunny sky with a high in the low 60s. The weather Friday stays dry… the sky will be partly sunny with a high around 70 degrees. Clouds increase Friday night.

THE ALABAMA WEEKEND: A dynamic weather system will bring widespread rain and thunderstorms to Alabama Saturday. We are still seeing differences in the global models, but the reliable European model hints at a surface low passing through Tennessee, with some surface based instability around here and potential for strong thunderstorms. Still a little too early to know if we will have a severe weather threat… rain amounts of 1-2 inches are likely. Dry air returns Sunday with a mostly sunny sky along with a high in the mid 70s.

NEXT WEEK: The first half of the week will be warm and dry as an upper ridge builds over the region… temperatures will reach the low 80s by Tuesday and Wednesday. A cold front will bring a chance of showers late in the week, late Thursday or Friday. See the Weather Xtreme video for maps, graphics, and more details. 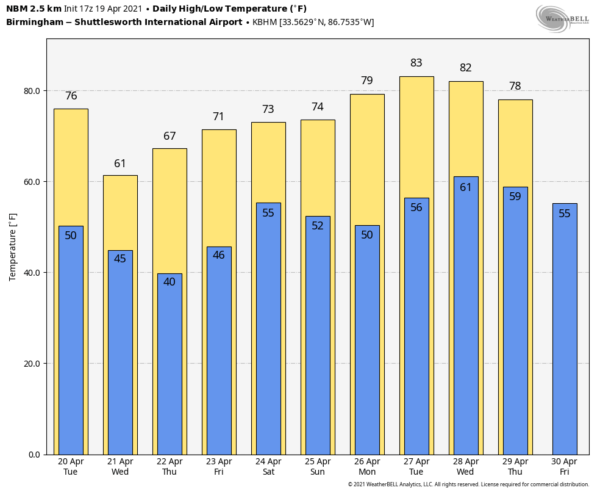 ON THIS DATE IN 1986: A major storm system produced ten tornadoes in Texas. One of these tornadoes virtually annihilated the town of Sweetwater. The tornado struck at the unlikely time of 7:17 am. One person was killed, and 100 were injured.