**No afternoon Weather Xtreme video today; I am live at Regions Field on ABC 33/40 for the Barons home opener**

RADAR CHECK: A few showers are over the northern third of Alabama this afternoon under a deep upper trough rotating through the state. Some sleet and graupel have mixed with the rain in spots across the Tennessee Valley due to the very cold air aloft. Otherwise, the sky is mostly cloudy over North Alabama, with a partly to mostly sunny sky for the southern counties of the state. Temperatures are well below average; many communities north of Birmingham are holding in the 40s. The average high for April 8 in Birmingham is 73.

Showers will end this evening, and the sky becomes mostly clear with a diminishing wind late tonight. This will set the stage for lows in the 26-36 degree range early tomorrow morning over the northern half of the state. A frost advisory is in effect for areas north of a line from Tuscaloosa to Calera to Roanoke, and colder pockets will see a freeze.

We should note Sunday morning will be cold as well, with frost developing in many of the same areas. Otherwise, the weekend will feature a good supply of sunshine… the high tomorrow will be close to 60, followed by mid 70s Sunday as a warming trend begins.

NEXT WEEK: Moisture levels will rise, and we will mention some risk of scattered showers and storms on daily basis Monday through Wednesday. This won’t be widespread rain, but more like activity we see in summer. Then, an organized band of rain and storms will likely arrive by Wednesday night or Thursday… simply too early to know if severe storms will be an issue then. We do note SPC has defined severe weather risks for areas west of Alabama during the first half of the week.

Temperatures next week will be close to average for mid-April with highs most days in the 70s… See the Weather Xtreme video for maps, graphics, and more details. 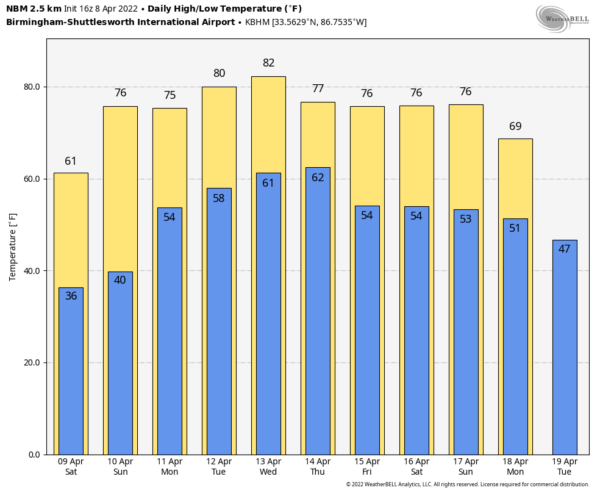 ON THIS DATE IN 1998: A violent F5 tornado cut a 31-mile long, 3/4-mile wide swath through nine Birmingham suburbs including Oak Grove, Sylvan Springs, Rock Creek, Pleasant Grove, Concord, Maytown, Pratt City, and Edgewater before lifting in the western limits of the City of Birmingham. The worst of the destruction occurred across the Oak Grove, Rock Creek and McDonald Chapel areas. Thirty-two people were killed in this tornado including three in Oak Grove, eleven near Rock Creek, four in Sylvan Springs, two in Wylam Heights, nine in Edgewater, two in McDonald Chapel and one in West Ensley.

The same parent storm would drop another tornado that killed two more people in St. Clair County near Wattsville.

Tornado Warning — Parts of Elmore, Montgomery Co. Until 4 am

Tornado Warning — Parts of Elmore, Montgomery Co. Until 4 am