It’s the battle of a cold front and a stubborn high-pressure ridge. Spoiler alert: the front will win. Eventually. Just when will that be? Let’s dig into the details.

ON THE WEATHER MAPS: Our cold front is near St. Louis this morning and our stubborn high pressure is anchored over southern Virginia. In the upper atmosphere, a major trough is building over the northern Rockies and northern Plains. This may be the thing that breaks the logjam.

FOR YOUR FRIDAY: Today will feature a mix of clouds and sun with scattered showers and storms beginning over the northwestern part of the state, and gradually sliding southeastward during the day and into the overnight. It won’t rain all day. It won’t be widespread or heavy. Afternoon highs will be in the upper 70s to lower 80s.

FRIDAY NIGHT LIGHTS: For the high school games Friday night, and for UAB’s tilt at Legion Field with Louisiana at 7 p.m., showers and storms are possible, with a cloudy sky. A lightning delay or two is possible, but not likely. Temperatures will be in the 70s.

TOMORROW: The front will be slowing down over Northwest Alabama. It will draw to a stop near I-59 during the day and start retreating northwestward. There will be clouds and a few showers Saturday morning, pushing southeast of I-59 by afternoon. They will weaken with time. Highs on Saturday will be in the upper 70s. Saturday night will be mostly dry with lows in the upper 50s and lower 60s.

GRIDIRON FORECAST: Saturday, Auburn will take on Ole Miss in Oxford (11a CT kickoff)… There will be a mix of sun and clouds with temperatures in the middle and upper 60s during the game.

Alabama is also on the road; they take on Tennessee in Knoxville (2:30p CT kickoff). The rain should be over there as well. Temperatures will be in the upper 60s.

SUNDAY/MONDAY: Look for a beautiful day both Sunday and Monday with partly cloudy skies and highs in the lower 80s. Lows both nights will be in the lower 60s. A few showers could return Monday evening.

TUESDAY: Look for partly sunny conditions with a few showers and storms. Highs will be in the lower 80s.

MIDWEEK SYSTEM: Stronger low pressure will emerge out of Louisiana on Wednesday. This will bring showers and storms to Alabama Wednesday and Thursday before the low tracks past and the main cold front approaches.

WEEKEND OUTLOOK: Clearing and cooler conditions arrive Friday and set the stage for a nice weekend next Saturday and Sunday with highs near 70 and lows near 50.

VOODOO TERRITORY: A quick-hitting system will move through on Monday the 2nd with a weakening front on Friday the 6th.

TROPICS: Hurricane Epsilon was downgraded to a category one status as it passed about 190 miles east of the island of Bermuda last night. Winds occasionally gusted as high as 38 mph during the afternoon and evening. The lowest pressure observed was 29.70 inches. Not much rain was observed. The hurricane will likely pick up a little intensity as it makes the turn to the northeast today and tonight, but peak winds will probably be 90 mph. It will pass well south of the Canadian Maritimes Saturday and Sunday heading for the graveyard of Atlantic Hurricanes and completing its mission of carrying heat from the tropics to the Poles. 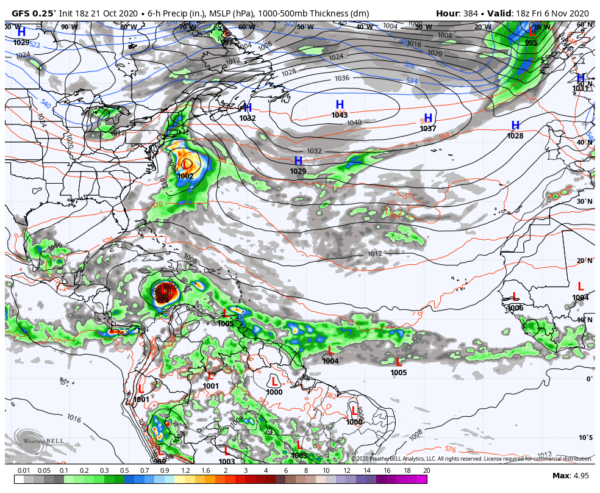 There also could be a system in the Caribbean the first week of November. It should not pose any threat to the U.S.

BEACHCAST: A chance of showers and storms is in the forecast through tomorrow along the beautiful beaches of Alabama and Northwest Florida. A slight chance of showers will return Tuesday through Thursday. Highs will be near 80 and lows near 70 until the end of next week. Water temperatures are in the middle 70s. There will be a high risk of rip currents through Saturday night.

NATIONALLY: A big winter storm will impact the northern Rockies Friday and Saturday. Snowfall totals could approach 25 inches in the mountains of West Central Montana. Winter Storm Watches and Warnings are in effect.

DANCING WITH THE STATS: Several high-temperature records set on Thursday from the Plains to the Northeast, including 87F at Wichita, KS, 90F at Amarillo, TX, London, KY with 81F, and 82F at Williamsport, PA.

ON THIS DATE IN 1920: Famed research meteorologist Theodore Fujita, was born on this date in Kitakyushu City, Japan. Fujita, known as “Mr. Tornado” after developing the international standard for measuring tornado severity, also discovered microbursts – sudden, severe downdrafts that can result in 150 mph winds on or near the ground – after studying the starburst patterns of trees uprooted by tornadoes. Follow my weather history tweets on Twitter. I am @wxhistorian at Twitter.com.