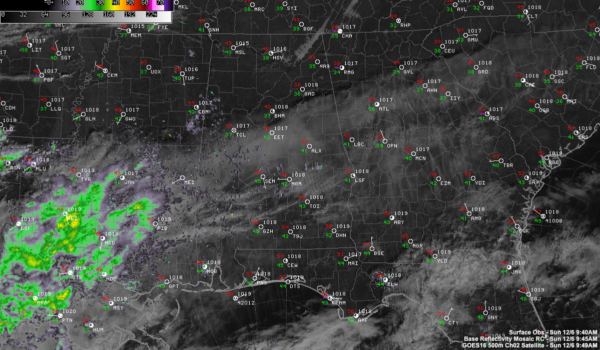 Filtered sunshine is the story across Central Alabama this morning with more blue skies over the northern part of the state. The patchy fog that formed in valleys and near lakes and rivers is gone and temperatures have warmed into the 40s heading for highs in the 50s to lower 60s.

The high clouds over the Central part of the state are compliments of a moist mid-and high-level flow out to the west southwest.

Regional radars show widespread showers across much of Louisiana and southwestern Mississippi at this hour. Those showers will move into southwestern Alabama soon after lunchtime. They will then move across Central and South Alabama in areas south of I-20 this afternoon and evening. Rainfall amounts will be light and rather spotty, generally less than one-tenth of an inch, with some spots picking up two tenths.

A cold front will sweep the precipitation out of Alabama tonight, ushering in more cool, dry air. It will be breezy late tonight and Monday with northwesterly winds gusting to over 20 mph at times. Highs on Monday will struggle to get out of the 40s over the northern half of the state, with readings near 50F along I-20, and lower to middle 50s south of there.

More rain comes in for the weekend.

7:00 AM | *An unsettled and much cooler pattern* — Perspecta Weather

Dry Through Tomorrow With Warm Afternoons : The Alabama Weather Blog

7:00 AM | *An unsettled and much cooler pattern* — Perspecta Weather

Dry Through Tomorrow With Warm Afternoons : The Alabama Weather Blog

Like Many Before Them, a Band of Friends Find Respite on Fire Island