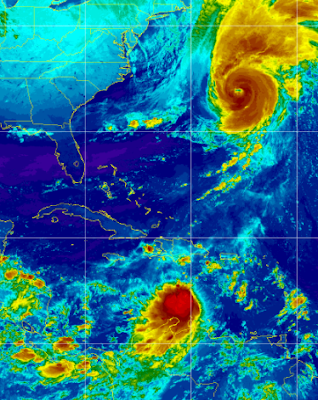 Fiona to the North, TD9 to the South.

Fast look at Fiona below.

The white dot to the S of Fiona…

But my forcus this morning is TD 9

But remember NHC is tracking it to Canada.

Busy day in the tropics…

…going to stay busy for a while. 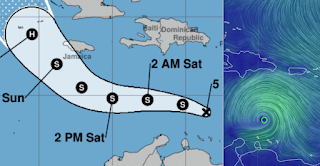 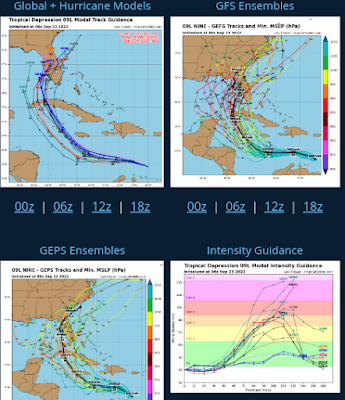 Link above should be saved.

There are many  models and they disagree.

Offering a huge buffet of options…

Currently TD9 is tracking WNW at 13 MPH into wind shear that is forecast to disappear down the road but it’s too soon to say anything with an amount of uncertainity in the models. The general path is WNW or W and then pulls up across Cuba after possibly missing Jamaica and aiming at Florida… but where in Florida you ask….    I still think this comes in North of Tampa on the Florida West Coast but there is low confidence in that in my mind as it is way too soon to tell. I’ll explain why below so before you start seeing Charley or Cleo or Irma dancing in your head know much has to happen before this track becomes carved in stone. And, yes if you are concerned and going to Publix and buying water and a few important items … leave now, come back and read this later as much will be the same with possibly a few different model suggestions. It doesn’t mean you will get the center of this projected Hurricane in Tampa, Key West or Miami but if it makes you feel better to have your basics in place and you can afford the expense buy what you do not have as this Hurricane Season is far from over. But, I cannot promise you it will for sure hit your city. Everyone in the circle is in it.

The middle black line is at 8 AM.

It will move around before 8 AM on Tuesday.

Anxiety is a real thing when people wake up and see they are in the Cone of a developing tropical storm forecast by some models to be a Major Hurricane so it’s only logical during the peak of Hurricane Season to be sure you have what you need (basics) before you spend the next 4 to 5 days watching the Cone moving towards your home.

If you remember the models agreed yesterday on development, yet the models differed down the road. Why is that the issue here? If you look at the width of the highlighted part of the Cone above you will see it could be either further North or South and when you take projected forecast movement and extrapolate it you have a big difference and that is why some models show it closer to the West tip of Cube before turning and other models have it traveling across a larger swath  of Cuba.

As you move further ahead in time this same difference becomes extrapolated and there is a wider cone. The question of intensity at this time and how much Cuba impacted intensity. Is it moving FASTER than currently forecast or slower. Hurricanes can do funny things when they bounce off of Cuba and land in the Florida Straits and if you think someone should be able to tell you EXACTLY what will be 5 days from now stop and remember that after everyone being SURE about Irma it dipped and headed towards Cuba and that little detour changed everything.  And at the end of this you have where it will make landfall again in Florida. All these differences extrapolated down the line give you a wide cone on the 5th Day.

Rather than think “oh my gosh Naples!!”

Imagine it could be anywhere in that circle.

It could be West moving further N up the coast.

Or it could be East of Miami moving NE towards Bahamas.

It could come in down by the Florida Keys traveling NE

Or it could move further up the coast looking for it’s spot. 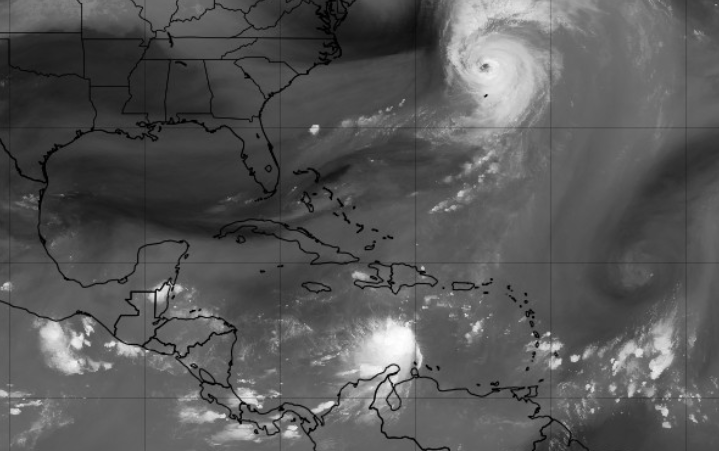 Some things to remember. There is a diving trof down the road forecast, but there is also much dry air that could impact TD 9 (but may not) and and Upper Level Low that could enhance it and make it a stronger hurricane or eat away at it’s energy and keep it in on the lower edge of intensity. That’s why the intensify forecast is so different as there are too many unknowns, even though we know the general track as seen in the Cone.  And Fiona is still up there rearranging the atmosphere out ahead of it so do what you have to do now to allay your anxiety but don’t spend the mortgate money and yet don’t ignore the fact that if you live in Florida you are in the 5 day portion of the Cone.  And, again the Cone will move further along in time at 11 AM.  I’ll update later today. I have the bulk of my children in South Florida and my brothers live there and my closest friends are there and with the upcoming Jewish New Year on Monday and Tuesday this throws a real wrench in what they will be doing on Sunday morning. But, I can talk on that later and many will contact me for my thoughts (and have) and my answer is watch the cone on the NHC that is upgraded in real time every 6 hours and if there is something you need as in you need to get a new inhaler for your child with asthma that you were going to do after the holidays, do it now. If you want to check your insurance there are rules that apply check with someone who knows the rules.  Driving North into Florida is not the easiest option as you may decide to race up to Orlando and the cone pulls North and Orlando is where the Hurricane chooses to cross Florida. Yes, this is Irma like in ways… in track, not currently intensity though that could happen also but we have only just begun but it will NOT stay a TD or TS if the models are all right. 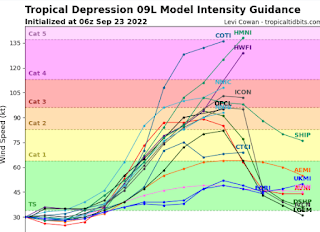 Ask me about the intensity later…

…there will be more agreement.

Will proof read later have to be somewhere.