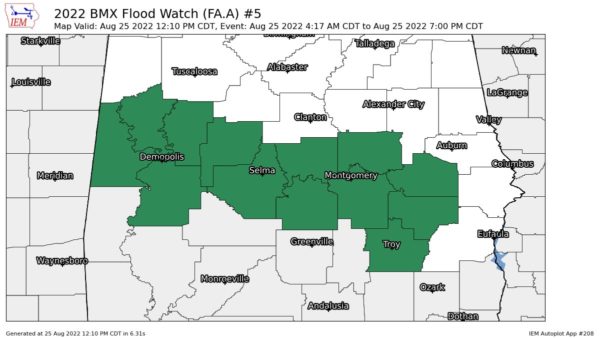 NWS Birmingham has expanded the Flood Watch in area to now include Autauga, Bullock, Elmore, Lowndes, Macon, Montgomery, and Pike counties in Central Alabama to go along with Dallas, Greene, Hale, Marengo, Perry, and Sumter counties until 7 pm tonight.

…FLOOD WATCH IN EFFECT UNTIL 7 PM CDT THIS EVENING…

* IMPACTS…Excessive runoff may result in flooding of rivers,
creeks, streams, and other low-lying and flood-prone locations.

* ADDITIONAL DETAILS…
– Rainfall across already saturated ground may result in areas
of flash flooding. Pockets of an additional 1 to 2 inches is
possible with locally higher totals.
– http://www.weather.gov/safety/flood

You should monitor later forecasts and be prepared to take action
should Flash Flood Warnings be issued.