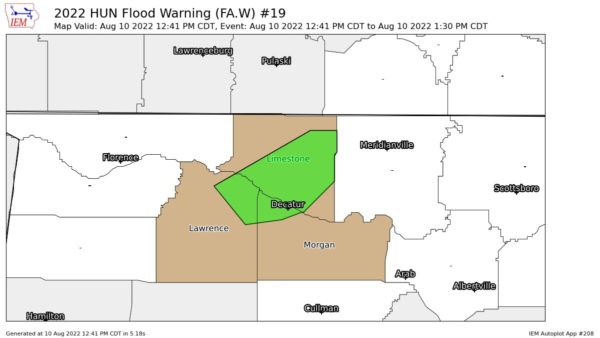 * WHAT…Minor or nuisance flooding is expected.

* IMPACTS…Flooding of rivers, creeks, streams, and other low-lying
and flood-prone locations is imminent or occurring.

* ADDITIONAL DETAILS…
– At 1237 PM CDT, Between 2 and 3 inches of rain has already
fallen across portions of Northern Lawrence, Northwestern
Morgan, and much of Central Limestone Counties. Minor
flooding or nuisance flooding will continue for the next hour
as runoff from the heavy rainfall continues.
– Additional heavy rainfall later today will worsen lingering
runoff this afternoon.
– Some locations that will experience flooding include…
Decatur, Madison, Athens, Trinity, Tanner, Harvest,
Hillsboro, Mooresville, Ripley, French Mill, Belle Mina,
Caddo, Capshaw and Wheeler.