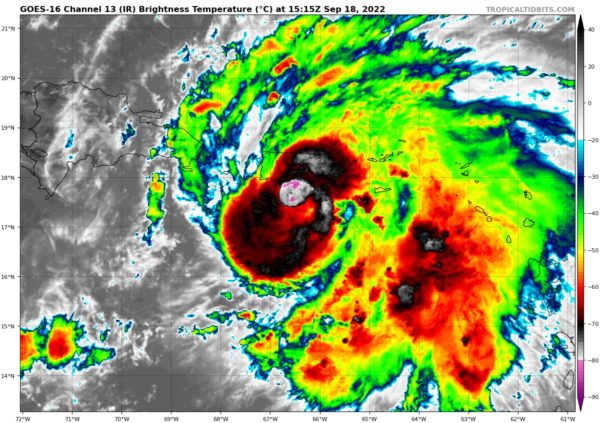 Fiona is becoming better organized this morning as it is moving near the southern coast of Puerto Rico. The center is about 80 miles southwest of San Juan this morning, or 45 miles south southeast of Ponce.

A good bit of lightning is showing up in the eyewall, which is indicative of a strengthening storm.

The hurricane is making the northwestward turn as expected and the center will cross southwestern Puerto Rico tonight and move near the northeastern coast of the Dominican Republic late tonight and Monday morning. Continued intensification is forecast during the day and the hurricane should have top winds near 90 mph by mid-morning tomorrow.

The big concern is life-threatening flooding and mudslides across Puerto Rico and the Dominican Republic. By tomorrow night, it will begin passing east of the Turks and Caicos in the southeastern Bahamas, continuing to strengthen as it goes, and should reach category two status (96 mph) overnight.

The hurricane will begin turning to the north and eventually northeast ahead of an upper-level trough that is developing over the U.S. East Coast.

By Wednesday morning, Fiona should be a category 3 major hurricane with top winds of 115 mph. At that point, it will be 600 miles east of Miami. IT should be making the northeastward turn by that time.

By noon Thursday, Fiona will be 250 miles southwest of Bermuda and moving toward a rendezvous with the island nation. Tropical storm force winds could begin there Thursday evening with strong tropical storm force winds possible by midnight. Peak winds should be around 60 mph with gusts to near hurricane force during the early morning hours. The official forecast has the center passing within 80 miles of the island, in that most dangerous eastern semicircle of the storm.

Of course, Bermuda is well within the cone of uncertainty and the center could pass closer than it currently forecast.