This year’s fall foliage in DC metro could end up vibrant because of a lot of rainfall in August and early September.

The quintessential symbol of fall: brilliant hues of orange, red and yellow unmasked as the days get shorter and nights get longer. But this year’s fall foliage in D.C. metro to-date has been unimpressive and in some areas, it’s also been delayed.

According to Sandra Farber Bandier, Extension Agent from the University of DC’s College of Agriculture, Urban Sustainability and Environmental Sciences, to have a spectacular year of foliage, “it can’t be too dry or too wet in the early fall, and temperatures can’t be too warm.”

FALL 2019 FOLIAGE: WHY IT COULD BE A  LACKLUSTER YEAR

Too Dry and Too Warm in September
After a very wet July, the watering hose turned off into mid-August and beyond. September 2019 ended up as the 4th driest on record with only 0.25″ of rain within the month. You don’t want an excess of rain in the early fall — but you still need SOME rain. In this case, we just had way too little of rain. In addition, September was very warm. To have a great fall of color, you need mild and sunny but not hot afternoons and crisp, cool overnights.

Everything outside has been during dry and browning early. With it too dry and warm, the leaves are not doing a great job of holding on, being healthy and ready to unmask the beautiful hues of orange, yellow and red as the days turn shorter and nights turn longer.

Too Much Rain was the problem in the fall of 2018

Before reaching our big foliage season in 2018, the condition of trees and leaves was unhealthy: they were drowning in too much rain! Sandra Farber Bandier from the University of DC said “The leaves after September were turning yellow on some trees due to the excessive amounts of rain in the month… once the leaves finally started changing, because they were changing from a yellow-green and not a rich, vivid green color, the colors unmasked are and will continue to be more dull and brown, not vivid and bright.”

RELATED: 9 best places to see the fall foliage around the DMV

We’re finally starting to see a little color in the mountains and along I-81, but not yet to peak. Some leaves are falling off trees even before fully changing colors because of how dry it has been.

If you want to see better fall color, the mountains in upstate New York, Vermont and into northern Maine currently have brilliant colors. 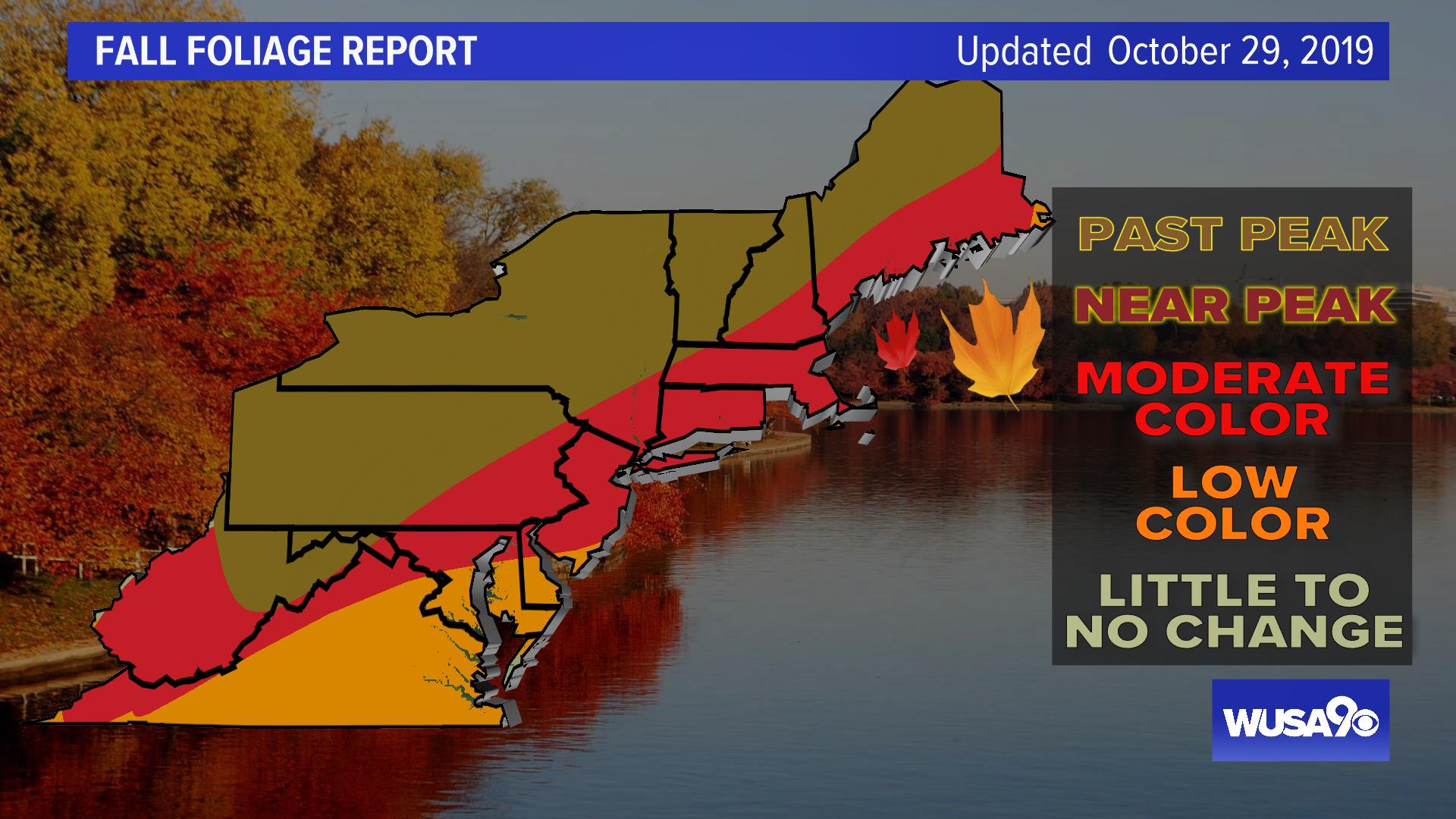 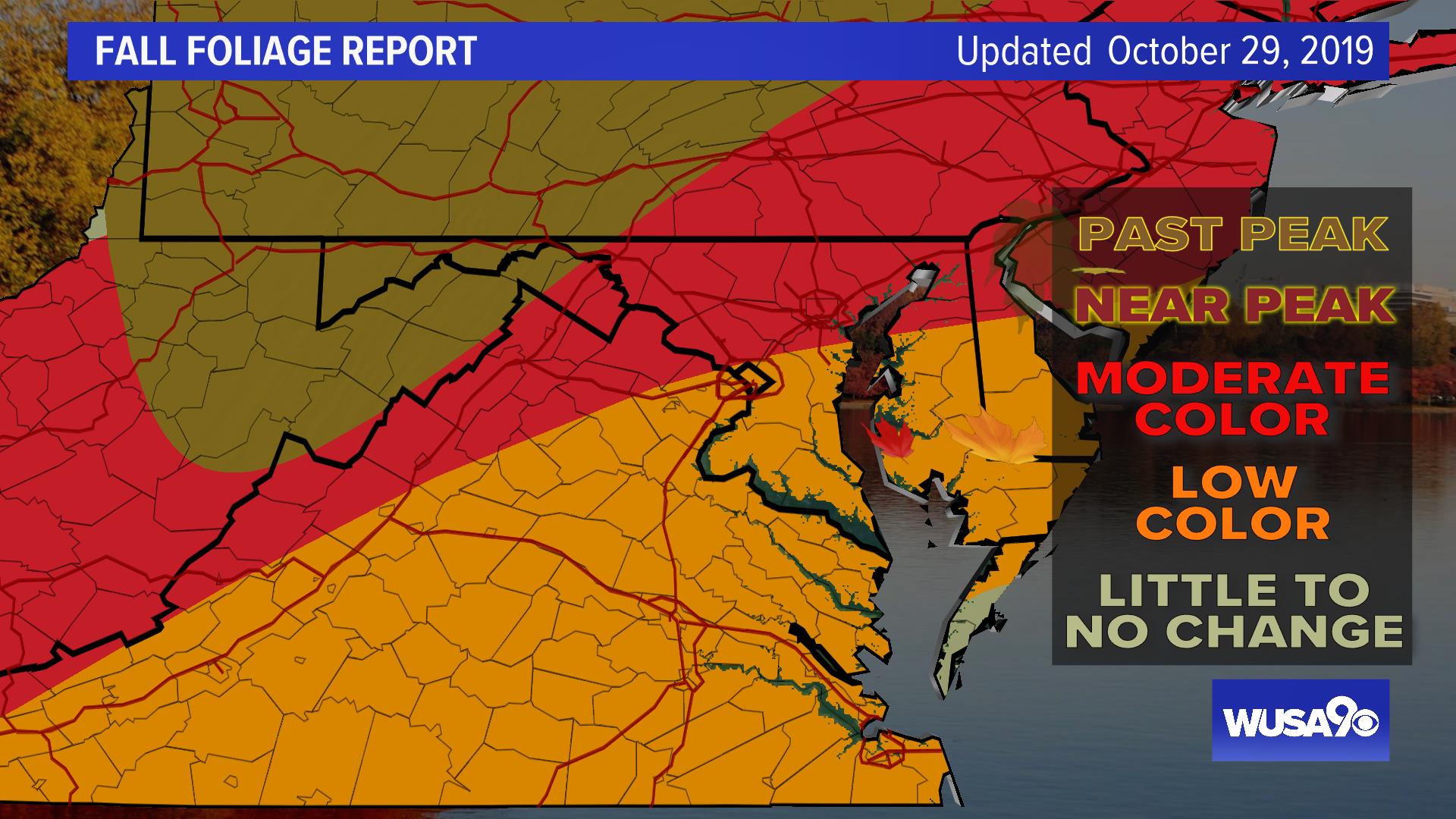 Frost and cold air are often thought of as the reasons the leaves turn color every fall. But it’s not frost or cold air that leads to this change: it’s the inability for trees to replenish Chlorophyll within the leaves, a process that usually occurs a few weeks before the first frost.

This change happens because of the shrinking hours of daylight and longer cool nights. Chlorophyll absorbs and processes energy from the sun (specifically red and violet wavelengths of sunlight) to make simple sugars and starches that trees use for food.

When the Chlorophyll production slows and is cutoff in fall, instead of green, the brilliant other colors are unmasked from the other pigments in the leaves. Carotenoids give leaves their yellow and orange colors. Anthocyanin give leaves hues of red.

RELATED: In Virginia’s wine country, the hot, dry weather is a welcome guest