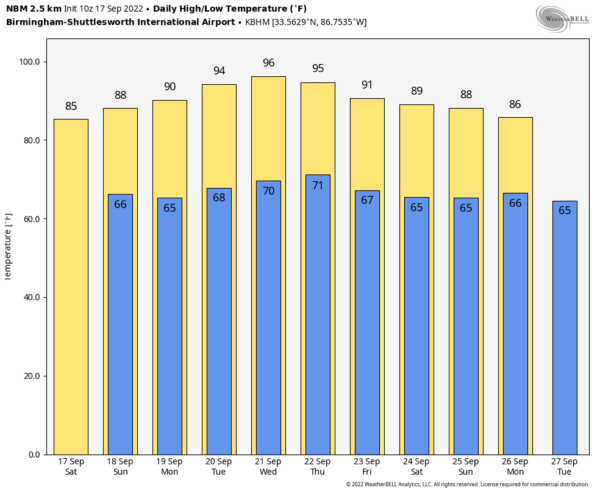 THIS WEEKEND: High pressure over the southeast will keep us dry through the weekend. We can expect mostly sunny skies and lower humidity values across Central Alabama today, with highs in the mid to upper 80s. Nearly the same story for Sunday, as we’ll continue with mostly sunny skies and highs in the upper 80s across the area. One or two spots may flirt with 90º in the southern portions of the area.

NEXT WEEK: Ridging rules over the area to start the work week, which will reinforce the nice weather and lack of rainfall. Heat levels start to increase as highs will be in the upper 80s to the lower 90s. The heat continues to build on Tuesday. Sunny skies with highs reaching the lower to mid 90s across Central Alabama. The highs will be a few degrees warmer for most locations on Wednesday as we’ll continue to stay dry. Highs in the mid 90s.

Heat levels will start to slowly decrease on Thursday, but we’ll stay hot and dry with plenty of sunshine. Highs in the lower to mid 90s. And at the end of the forecast period on Friday… We’ll be a few degrees cooler as the heat bubble moves back westward. We’ll have sunny skies, with highs in the upper 80s to the lower 90s. 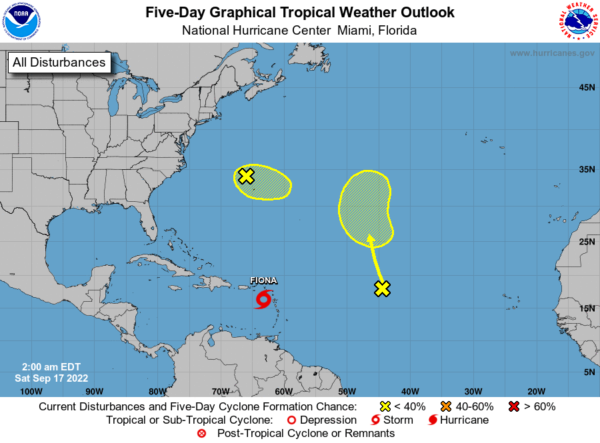 THE TROPICS: Fiona is currently a strong tropical storm with maximum sustained winds around 60 mph, and is expected to strengthen into a hurricane before the end of the weekend. A hurricane watch is up for Puerto Rico, along with tropical storm warnings for portions of the Dominican Republic and the Virgin Islands. The forecast track has Fiona curving to the north and staying just east of the Bahamas and well away from the east coast of the US. Heavy tropical rain is likely to produce flooding issues across the islands, which may lead to mudslides in the higher elevations of Puerto Rico.

We also have a frontal low located more than one hundred miles northwest of Bermuda that is producing disorganized showers and thunderstorms well to the east of its center. Development of this system into a tropical cyclone is not anticipated due to strong upper-level winds. The low is expected to move eastward to east-southeastward at about 10 mph during the next day or two.

Finally, disorganized showers and thunderstorms that are over the central Atlantic are associated with the northern portion of a tropical wave. Some slow development of this system is possible during the early or middle part of next week while it moves slowly northwestward to northward.